USC School of Pharmacy leader Sarah Hamm-Alvarez has been recognized with a fellowship by the American Association of Pharmaceutical Scientists for her breakthrough translational research on membranes.

Sarah Hamm-Alvarez, Gavin S. Herbert Professor in Pharmaceutical Sciences, executive vice dean and vice dean for research and graduate affairs at the USC School of Pharmacy, was named a 2014 AAPS fellow at the association’s annual meeting and exposition in November.

According to AAPS, “fellows are granted the honor each year for making sustained remarkable scholarly and research contributions to the pharmaceutical sciences.” 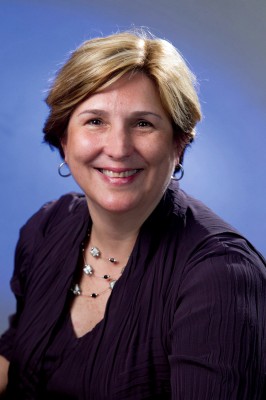 The research by Hamm-Alvarez focuses on membrane trafficking, the processes that allow cells to secrete and internalize extracellular proteins and small particles that can be adapted for drug delivery. Among her accomplishments is bringing to the clinical trial stage a biomarker she discovered for Sjögren’s syndrome, a severe autoimmune disorder that can lead to internal organ damage but which is hard to distinguish from ordinary dry eyes.

“The test we’ve developed provides a low-cost diagnostic tool that has the potential to increase early identification of Sjögren’s syndrome patients,” Hamm-Alvarez said. “We’ve discovered an enzyme that is enriched in the tears when examined in our lab disease models.”

The current translational trial is the next step in moving her invention into a marketable product that can be used to by ophthalmologists and optometrists to simply and effectively diagnose a potentially dangerous disease.

Hamm-Alvarez received a bachelor’s degree in chemistry from Carleton College in 1986 and a Ph.D. in biochemistry from Duke University in 1990. After completing a three-year postdoctoral fellowship in cell biology at Duke, she joined the Department of Pharmaceutical Sciences faculty at USC as an assistant professor in 1993.

Executive will bring health expertise to USC School of Pharmacy

Kermit Crawford, who led a transformation of the pharmacy experience at Walgreens, will serve as executive in residence.

When Reyna Raya was 11, she decided she wanted to be a pharmacist. Forty years later, she is one year away from her goal.