Rubenstein visited the school recently to teach students how to be good weather watchers as part of the Joint Educational Project’s WonderKids curriculum.

Seen regularly on CBS 2 and KCAL 9, Rubenstein helped children understand the “H” and “L” symbols used on TV weather maps to show high and low pressure. To do this, he taught them a simple mnemonic — “H is for happy weather” and “L is for lousy weather.” He also explained how tornadoes and hurricanes are formed, how the seasons are created and warned against going outside in a thunderstorm.

“If you are sitting at home and you look out the window and see that,” Rubenstein said, pointing to a dramatic shot of lightning splitting the sky, “are you going to run outside to play?”

“No!” came the resounding chorus from the young audience.

Students were surprised to hear Rubenstein nominate their grandparents as great weather observers. 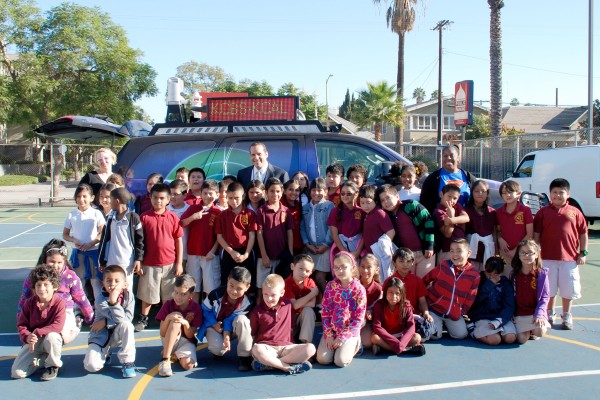 “A big part of the weather is understanding what happened here in the past,” Rubenstein said. “Grandparents who have lived in the same house for 30 to 40 years have sat on the porch and watched the weather come through for a very long time. They know exactly what to expect on a day like today where there are clouds in the morning and sun in the afternoon.”

Rubenstein fielded questions before leading the youngsters outside to view the mobile weather station set up in his CBS/KCAL vehicle.

“I liked learning how the heat comes to you from the Earth,” said Hector Linares, 8.

I’m going to look out the window and look up for 20 seconds every day and see if the weather is going to change.

“I liked the tornados best,” added Diego Hernandez, 7. “They were exciting. I didn’t know how they formed before, so I learned that today. Now I’m going to look out the window and look up for 20 seconds every day and see if the weather is going to change.”

Hernandez and other youngsters were excited to see the familiar face from their television screens.

“I had seen the weatherman on TV so it was really cool to see him at school,” he said. “I’m going to tell my mom that I saw the weatherman.”

The wonders of science

Developed by JEP’s USC ReadersPlus Program, WonderKids is an after-school curriculum for first though third-graders.

“Kids are at their most curious and inquisitive when they’re young and that’s when they ask all those wonderful questions — ‘Why is the sky blue?,’ ‘Why isn’t it raining?’,” said Tina Koneazny, associate director of JEP.   “So we really wanted to create this gateway to science to nurture that curiosity in younger kids so they can start exploring the wonders of science.”

“We start by asking students, ‘What do you think a meteorologist [or geologist, marine biologist] does?’ Then they learn about the profession and do related hands-on activities, like making clouds and barometers,” Koneazny said.

“On the last day we bring in a professional in that particular field so the students can ask questions,” she said. “It’s great for the kids to have this real-world connection and to think ‘this is this guy’s job, he studies the weather for a living. I could do that.’ ”

How will our next generation of kids learn about science?

As educators nationwide prepare for inquiry-based science teaching standards, a USC professor helps them think outside the textbook.