Weijie Wang of the USC Price School of Public Policy was named one of only two Ph.D. students nationwide to earn the 2014 Staats Emerging Scholars Award from NASPAA, the national accrediting organization for schools of public affairs in the United States.

The award recognizes the scholarly contribution of Wang’s research paper titled “Exploring the determinants of the effectiveness of neighborhood governance networks.” 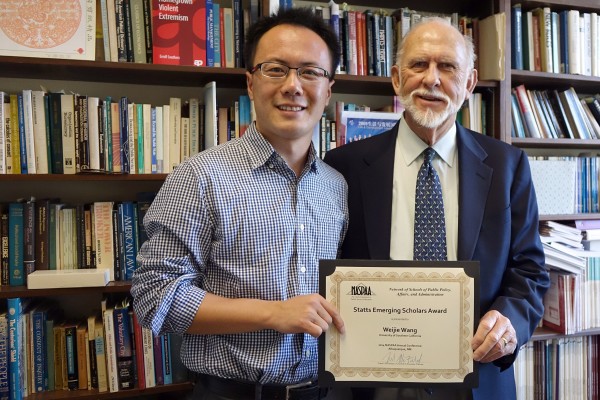 Wang originally majored in public administration as an undergraduate, based on the results of the National College Entrance Examination in China, but now he has developed a true passion for the subject.

As an undergraduate at Wuhan University in Central China and a master’s student at Renmin University in Beijing, Wang read numerous books and articles by prominent American scholars, including one by USC Price Professor Terry Cooper.

“At that time, I never imagined that one day he would become my [dissertation] adviser,” Wang said. “It’s amazing.”

Under the guidance of Cooper and the rest of his dissertation committee, Wang studies inter-organizational collaboration, which is how the government works together with businesses, civic organizations, nonprofits or citizens to provide services or govern urban areas.

“When we’re talking about network centralization,” he said, “it means that there is an organization that coordinates all of the other network members to pursue a network outcome — for example, effectiveness in service delivery or governance.”

In contrast, Wang has found that “density” contributes more to effectiveness for the relatively small collaborative networks that he studies in Beijing.

“Density is when there is no such centralized organization coordinating all the others,” he explained. “All of the organizations are just working together, and they are equal in status or power in the network. So it’s decentralized cooperation.”

Cooper explained that understanding what contributes to the effectiveness of neighborhood participation in governance is one of the most important research concerns related to how citizens engage government. Wang is doing timely work on this problem, he noted.

For [Wang] to win this brings a lot of prestige and a lot of attention to our school.

As the recipient of the Emerging Scholars Award, Wang had the opportunity to present his paper at the 2014 NASPAA Annual Conference, held in New Mexico from Nov. 4-6. He found the experience valuable both as a scholar and as a soon-to-be graduate who is currently applying for positions as a professor in the United States and abroad.   Cooper, who nominated Wang for the NASPAA honor, discussed how the award also raises the visibility of USC Price.

“For him to win this brings a lot of prestige and a lot of attention to our school,” Cooper said. “I can tell you after it was announced and after his talk — he did essentially what will be his job talk out on the job market — quite a number of people came up to me and said, ‘That student is really excellent.’

“He’s so highly motivated. He’s a good organizer. He has great leadership skills. He’s very smart, and he does excellent work,” Cooper added. “And he’s just a superb guy.”

High achiever gears up for leadership in student government

USC School of Cinematic Arts Professor Howard Rodman was recognized on Oct. 31 by the French government as a Knight of the Order of Arts and Letters for his contribution to the arts.

Elected as Residential Student Government president in May, Sera Choi has big plans for the organization and the 7,000 students it represents.