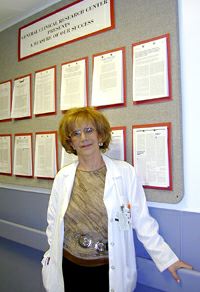 When 15-year-old Fontana resident Andrea Cuellar’s lab tests revealed a marker for Type 1 diabetes (commonly known as insulin-dependent or juvenile-onset diabetes) no one was surprised–just devastated that the disease had struck another member of the Cuellar family.
Type 1 diabetes affects fewer than 10 percent of all diabetics, or about 2 million Americans. For reasons that remain not clearly understood, their immune systems make antibodies that indicate the destruction of the cells that make insulin.
Hoping to save some of the insulin-producing beta cells in Andrea’s pancreas, her family enrolled Andrea in a clinical trial of a pioneering prevention project at LAC+USC Medical Center in 1998.

Now 17, Andrea comes to the General Clinical Research Center at LAC+USC once a year for an intravenous insulin infusion, followed at home with twice daily low dose subcutaneous insulin. “It doesn’t really bother me,” said Andrea.
Begun back in 1994, the study, called the Diabetes Prevention Trial, Type 1 (DPT-1), has just received NIH approval for another 2 years. It is open to those considered at risk and whose blood contains antibodies that indicate destruction of insulin producing cells many years before Type 1 diabetes develops.

Although there is no cure for diabetes, researchers hope that doses of insulin will trick the bodies of high-risk individuals like Andrea into tolerating the cells that make insulin, the hormone the body needs to metabolize sugar.
Adina Zeidler, professor of medicine, heads the LAC+USC Medical Center portion of the study, which focuses on minority communities in Los Angeles. Studies show that Type 2 diabetes afflicts American minorities at rates two to three times higher than among American whites. Native Americans have the highest rates, followed by Hispanics, African Americans, and Asians. Type 1 diabetes is also increasing in minority populations, said Zeidler. These differences among racial groups are likely the result of genetic differences in susceptibility, she added.

Zeidler’s group has already screened nearly 8,200 individuals who have relatives with insulin-dependent diabetes, with about 2.9 percent testing positive.
“We’re trying to identify parents, sons, daughters and siblings of Type 1 diabetics to see if they have any risk factors that could evolve into diabetes,” said Zeidler. High-risk individuals identified by the screening process can be enrolled in the study, and may receive treatment that will potentially delay or stop the onset of the disease.
Clinical evidence suggests that it may be possible to prevent the onset of diabetes by delivering insulin injections to high-risk individuals as soon as their risk is detected. The study is the first large-scale controlled clinical trial designed to test this hypothesis.

Insulin is typically taken by injection to provide adequate levels of the hormone to Type 1 diabetes patients, whose bodies have stopped or drastically reduced its production.
But “the current trial uses insulin in pill form for people who have not been diagnosed with the condition and are at an intermediate risk of developing the disease,” said Zeidler.
Since Type 1 diabetes tends to run in families, many individuals with parents, brothers or sisters with the disease are at increased risk of developing it themselves.
The trial will evaluate the ability of orally administered insulin to delay the onset of Type 1 diabetes, or to prevent it altogether.

Those who are at risk will be randomized into two groups.
“High risk participants in the study group will receive intensive insulin therapy once a year, while beginning a regimen of daily insulin injections,” said Zeidler. “Control-group participants will be closely monitored for the duration of the study.”
Zeidler stresses that the trial is for individuals who are at risk of developing insulin-dependent diabetes, and not for patients who are already undergoing treatment for the disease.
Participants must be between the ages of 3 and 45 and first-degree relatives of people with insulin-dependent diabetes. Second-degree relatives, including cousins, nieces and nephews, aunts and uncles, should be between 3 and 20 years old.

Zeidler and nurse coordinator Noemi Vega have been reaching out to churches, schools, and Head Start programs to identify families with a history of Type 1 diabetes. The program offers free diabetes screening to potential study subjects. Those at moderate risk of developing the disease–determined by a test that screens for antibodies against insulin-producing cells — will be able to enroll in the study. Subjects will receive routine examinations and diabetes screenings every six months.