Testing for malaria may soon be easier and safer, thanks to the work of two USC Viterbi School of Engineering biomedical engineering students and their partners.

Starting with little more than a couple of refrigerator magnets and a laser, the team including Ph.D. students Samantha McBirney and Alexa Hudnut reduced a trial malaria testing device to one-tenth its original size, eliminated the need for a custom-manufactured cuvette to hold the patient’s blood sample and prevented the tester from potentially being exposed to dangerous blood-borne pathogens. 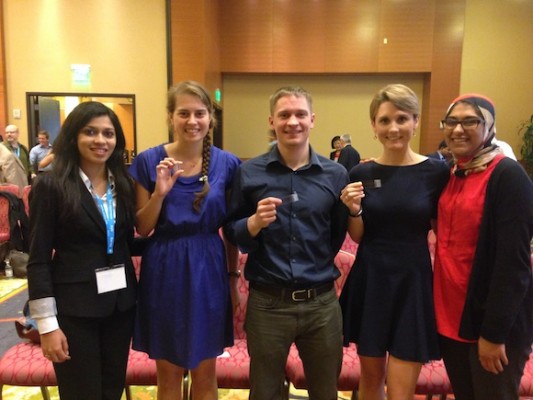 Working around the clock for two days, the team eliminated the device’s original 4-by-3-by-2-inch plastic box and the cuvette, replacing them with a small, microfluidic chip. The chip would collect the blood from the patient’s finger prick, mix it with deionized water – the potentially risky step for the tester – and allow for a much smaller device, about one-tenth the size of the original.

Conference attendees selected the work as having the greatest potential for success from among the nine teams that made presentations. The Japanese chemical company Denka, which successfully tested Lewandowski’s earlier design, has agreed to test the new design and increase its investment.

McBirney and Hudnut, who work in USC Professor Andrea Armani’s research lab, will continue to team with Lewandowski long-distance to further develop and fabricate the device.

Can sleep apnea patients get a good night’s rest?

Three researchers develop new tools to see inside the airway of pediatric patients.

Despite Ebola scare, Americans keep calm and carry on

Two-thirds of Americans surveyed see Ebola as a foreign problem; less than a third think it would ever affect them or their family members.