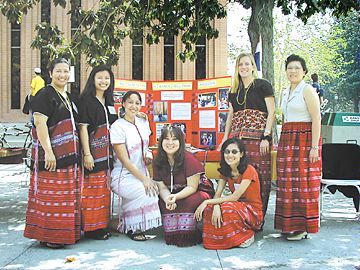 One was a short animated film about a dedicated artist. Another – a Web site – provided a basic understanding of the scarab beetle and its significance to the ancient Egyptians. Yet another was a poster display describing the development of a device to identify creative people.

These projects and a host of others – including audio-visual tapes and original artwork – were presented in late April at the second annual Undergraduate Symposium for Scholarly and Creative Work.

“We were pleased that this year’s event brought out so many undergraduates with such a diverse range of talents,” said Katharine Harrington, director for undergraduate programs.

The symposium lets undergraduates at the two USC campuses share examples of their research and creative endeavors.

Each undergraduate project had a faculty sponsor whose role ranged from principal investigator to honors program director to mentor, said Harrington.

A ceremony at the conclusion of the symposium awarded $500 first prizes and $250 second prizes in each of the six categories. First-place winners and their categories were:

• Life sciences – Thuzar Shin, sophomore in gerontology with a minor in history, for his poster illustrating “reactive as trogliosis that occurs in response to various physiological challenges to the brain, including head trauma, oxidative damage, stroke and Alzheimer’s disease,” and an evaluation of the involvement of caspases – a family of proteases – in this process (faculty sponsor: Christian J. Pike, assistant professor, gerontology).

• Physical sciences, mathematics and engineering – Mohammed Hossain, a junior in physics/computer science, for his poster describing experimental findings on the magnetic interactions of sodium atoms with iron and cobalt (faculty sponsor: Gerd Bergmann, professor of physics).

• Professional and applied disciplines – Darlene Duran, a senior in business administration, for her poster “Creativity Potential Profile,” illustrating that not only is intelligence multifaceted, “creativity also has a number of dimensions” (faculty sponsor: Alan Rowe, professor emeritus of management and organization, Marshall School of Business).

• Judge’s Special Interdisciplinary Award – Lindsay Harrison, a senior in gender studies, for her poster, “Coming Out of the Constitutional Closet,” which “analyzes and compares several legal strategies … in determining which legal strategy best promotes the twin goals of gay and lesbian empowerment and mainstream social transformation.”

“Participating in the undergraduate research symposium was exceptionally fulfilling,” said Harrison, “not only because it enabled my research to be displayed and recognized, but also because I was able to see the amazing work that other ‘SC students are doing. It was truly an impressive bunch, so much so that I didn’t think I would win.”

(Harrison was also named one of the university’s first Renaissance Scholars at the May 12 commencement.)