Erick’s love of sport, however, was obvious.

About Kicks for Kids

The organization has five fundamental focuses:

Events are held at no cost to participants.

Family members are encouraged to participate.

The group offers a 1:1 ratio of player to volunteer.

Games range from soccer to “duck duck goose” to bowling.

“There was genuine passion in the way he kicked a soccer ball,” said Shakir, who earned a bachelor’s degree in international relations and biology.

“Speaking to Erick’s mother after the event, I realized there are very few resources for children with physical and developmental disabilities, particularly in organized sports.”

Erick inspired Shakir to found Kicks for Kids at USC. The program started in September 2013 with 30 children and 50 volunteers. Dedicated to promoting a healthy, active lifestyle for special needs children, Shakir’s organization now counts 510 volunteers and 300 players. During sessions held at the heart of the University Park Campus at McCarthy Quad, youngsters are matched with student volunteers for one-on-one sporting activities. Children also receive a free nutritious snack and tips on healthy living.

A part of childhood

Shakir grew up in San Jose, the son of immigrants from Iraq. Organized sports were a major part of his childhood.

“It really troubled me that children with special needs are excluded from these programs because of disabilities they are born with,” said Shakir, whose soccer-playing skills earned him a place in the Olympic Development Program at age 11. 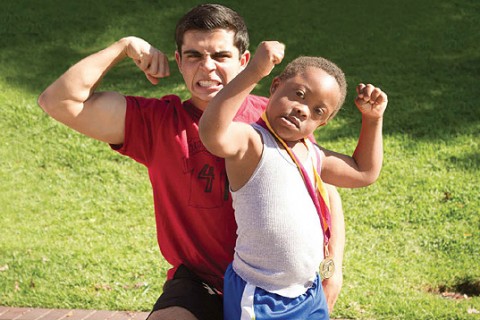 Now becoming a national nonprofit, Shakir’s organization may be expanded to other universities nationwide.

“I wanted to provide a place where kids like Erick could come and play without fear of being bullied or feeling left out,” Shakir said. “I’m thrilled Kicks for Kids is achieving that goal.”

USC junior helps to create a comfortable living environment for peers by relying on core values of community, scholarship and leadership.

Sustainability-minded students hatch a plan for the Trojan Backyard Chickens Club. And they’ve already had a coopwarming party.