Who isn’t afraid of things that go bump in the night?

“Monsters terrify us because they don’t just feed on our flesh,” said folklorist Tok Thompson. “They feed on our souls. They know us much better than we know them because they are us — twisted versions of ourselves. They are manifestations of the inconceivably evil, wrong and disturbing parts of our own psyche, haunting and hunting our daylight selves.”

Dressed in a Victorian frock coat and reading by flickering candlelight, Thompson drew nervous laughter from the capacity crowd filling the USC Libraries Lecture Hall when he invited them to “take a look at the person next to you. What sort of monster are they?”

What Makes a Monster?

What Makes a Monster? is an exhibition examining preconceived notions about monsters and the emotional, physical, political and cultural responses they elicit. 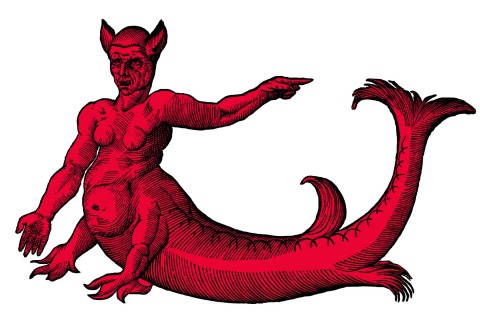 The audience had come for What Makes a Monster? — a Visions and Voices signature event on Nov. 18 that convened a panel of experts on the monstrous, including Thompson, USC Roski School of Art and Design faculty artist Charlie White and game designer Leonard Boyarsky (Diablo III).

Monsters span all ages and cultures, and folklorists study them for good reason.

“We learn a lot about societies when we understand what terrifies them,” Thompson said.

He pointed to La Llorona, the weeping ghost of Hispanic folklore who drowned her own children to please her lover. Not content to stay at home, this murderous specter has followed Mexican immigrants to Los Angeles, where she still lures unsuspecting children to a watery grave.

And new monsters are constantly evolving. Thompson pointed to Slender Man, the cysberspace meme who made headlines earlier this year when he inspired “proxy” murder attempts by several teenage girls.

The panel discussion was followed by a reception in Doheny Memorial Library’s Treasure Room, where the current exhibition on monsters runs through May 31, 2015.

Celestial inspiration: Why generations of artists, writers and filmmakers have looked to the sky

USC experts consider why our sense of wonder at the cosmos — and our desire to try to make sense of our place within it — have inspired creative work for generations.

The terrors that haunt and hunt our very souls