In her second week as a resident assistant, Azmera Hammouri-Davis received a visit from an anxious freshman stressed about her major.

“I don’t know what I’m doing with my life,” the student told Hammouri-Davis. “My parents really want me to do biological sciences, and I don’t know if I can get through it.”

Hammouri-Davis comforted the student, reminding her that it was only her second week and feeling overwhelmed was completely understandable.

“You have time, you don’t have to declare your major until the end of your second year,” Hammouri-Davis advised the student. “Your parents want the best for you, and I’m sure they’ll be supportive either way. Just breathe right now.’

“She left my room feeling a lot less anxious.”

Hammouri-Davis is a junior at the USC Dornsife College of Letters, Arts and Sciences, where she is majoring in social sciences with an emphasis in psychology, and visual and performing arts. Now in her second year as an RA, she said moments like those are the most rewarding part of the job.

When a resident puts a note on my door saying, ‘Thanks for talking to me today, it really made a difference,’ that makes it all worthwhile.

“When a resident puts a note on my door saying, ‘Thanks for talking to me today, it really made a difference,’ that makes it all worthwhile.

“Being an RA, you’re almost like a parent, but you’re a student, too. We give advice you would assume people know already, but sometimes they just need to hear it. That’s one thing I’ve learned being an RA; even if it’s common sense to you, it might not be to someone else. That’s why we’re here.”

In addition to helping residents with academic concerns, adapt to USC and have a better living experience, RAs also enforce resident community standards. Being an RA also has practical advantages: The position covers room and board and meal plans.

Growing up in Hawaii, Hammouri-Davis was drawn to USC Dornsife by its psychology program, sports opportunities and diversity. 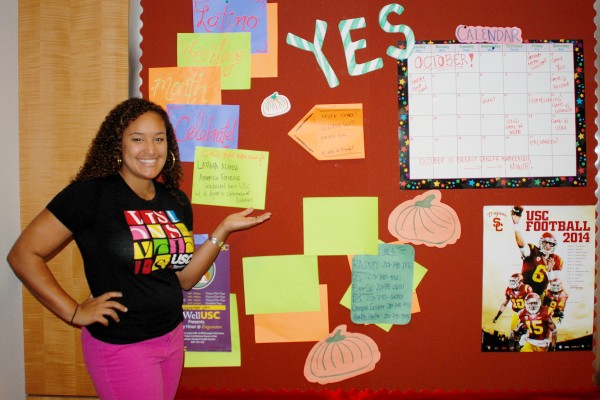 After spending her freshman year on Somerville Place, the African-American residential interest floor in Fluor Tower on the University Park Campus, Hammouri-Davis applied to the Department of Residential Education and asked to be Somerville’s RA for her sophomore year.

“We watched Azmera grow by taking on leadership roles during her freshman year at Somerville,” said Corliss Bennett, director of the USC Center for Black Cultural and Student Affairs.   “RAs are usually upper classmen and women, but when Azmera applied, we felt so strongly about her that we wanted her to be ours. The reasons she was chosen? Personality, caring, commitment, leadership. She’s just a sweetheart.”

Hammouri-Davis enjoyed her experience so much, she applied to be an RA during her junior year.

“She did such a good job last year they made her the RA for the ninth and 10th floors of Webb Tower, which house about 50 upper classmen and women, many of them international students,” Bennett said.

Hammouri-Davis has found the opportunities being an RA has given her to interact with people from all over the world and organize programs tailored to their interests particularly rewarding.

“Programming events was something I didn’t know how to do before I became an RA,” she said.

Recent resident events she helped plan in her role as an RA have included trips to LA Live and a hockey game. She is currently planning a nutritional potluck to bring residents together by challenging them to make a dish from their homeland using healthy ingredients.

Hammouri-Davis feels her psychology major has been an asset in helping to fulfill her role as an RA.

“Studying psychology has given me terms to articulate what I’m thinking or feeling. It’s helped me understand where people are coming from, which is important when dealing with roommate conflicts, for example.”

Both in her coursework and as a personal interest, Hammouri-Davis is passionate about teaching spoken word poetry workshops to help young people express themselves.

“Being an RA has helped me build the confidence to be able to enter any space and talk to different types of people,” she said.

“I’ve gotten so much out of being an RA. I can’t imagine my USC experience without it.”

Relieve some stress with these photos of puppies at USC

Put your worries aside for a few minutes and enjoy these pictures of man’s — and Trojans’ — best friends.

As Trojans head to their first classes Monday, take one final look at some of last week’s most enjoyable events — from a festival and spirit rally to a barbecue with new friends.