Cheryl Boone Isaacs, head of the Academy of Motion Picture Arts and Sciences, is pleased to know that Trojans are familiar with the organization’s brand and programs.

“You are our partner. I want to say our child, but not really,” she said, referring to the fact that the USC School of Cinematic Arts grew out of AMPAS’ first education initiative — founding president Douglas Fairbanks’ idea for a training program in filmmaking at a major university.

What USC is doing is producing the next generation of filmmakers, of storytellers and that’s so very important for all of us.

“What USC is doing is producing the next generation of filmmakers, of storytellers, and that’s so very important for all of us because cinema is one of America’s best art forms,” she said. “Even though films are made around the world, and made extremely well, there is something unique about Hollywood history.” 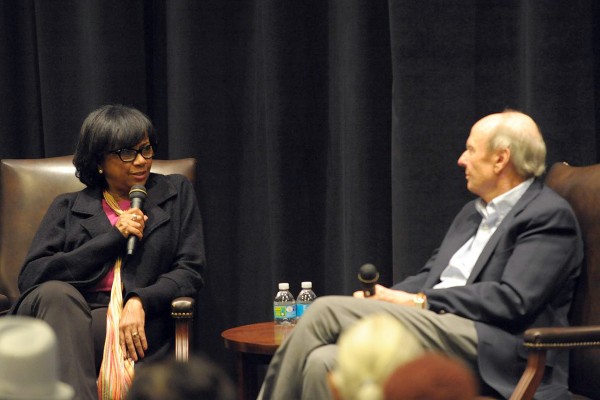 Boone Isaacs, who recently began her second one-year term as AMPAS president, visited SCA on Nov. 17 for a conversation about the academy’s mission and work. The evening featured a conversation with Professor Rick Jewell, holder of the Hugh M. Hefner Chair for the Study of American Film, after which she took questions from the audience.

She was most enthusiastic about the academy’s plans for a movie museum in Los Angeles, which Jewell noted is long overdue.

“As someone who has spent most of my life in this town, it’s always pained me greatly that we didn’t have the world’s greatest cinema museum here,” he said.

Boone Isaacs said the $350 million Academy Museum is her current top priority. “Keeping that ball rolling is the number one issue on my plate,” she said of the museum, which could be open for business in as little as three years.

She said everyone should visit its “teaser trailer,” an exhibition on costumes that is currently on display at the museum’s planned site, a landmark building built in 1939 adjacent to the Los Angeles County Museum of Art.

She said there is no plan to shorten the show. After all, almost 44 million viewers tuned in last year, she noted. Also safe are short film and documentary categories, which she said will continue to be included in the broadcast.

Those categories don’t get the kind of mass viewership they should, she argued, but considering their standing in modern culture (most filmmakers start out making shorts and documentaries, which are integral in educating audiences about pressing issues), it is “important to stay the course.”

And there was speculation about whether Neil Patrick Harris, an actor known for his work in television, would excel as host. Noting that last year’s host Ellen DeGeneres also came from TV and got rave reviews, Boone Issacs was confident that 2015 would be no different.

Sound decisions made with help of Academy Award winner

Richard Weinberg and the sound department at the USC School of Cinematic Arts took a broad leap forward in remote collaboration by hosting a master class with Oscar-winning sound designer Randy Thom.

And the Oscar for best conversation goes to …