In an ongoing commitment to fostering community partnerships throughout the city, USC has awarded the Los Angeles Police Department a $100,000 annual grant to support its burgeoning Cadet Leadership Program.

The annual award will help the LAPD expand its signature community youth program, which has 6,000 active members age 13 to 20 from every part of the Los Angeles area. With USC’s support, the LAPD Cadet Leadership Program can continue to help students from all walks of life achieve academic excellence, develop character and leadership skills, and lead productive lives.

“This support speaks to USC’s confidence in these young women and men, and our shared commitment — along with LAPD — to our community and its youth,” USC President C. L. Max Nikias said Wednesday morning before presenting the award.

These cadets are our future. Look at them. It’s America’s future.

“These cadets are our future. Look at them. It’s America’s future,” Nikias said. “The USC community stands with them, not only today, but every day for the many, many years to come.”

Nikias presented the award to LAPD First Assistant Chief Earl Paysinger and about 50 cadets who stood with him at Argue Plaza. The partnership was a natural pairing for USC and the LAPD, which renewed its commitment to the program in 2007 and has since undergone “seismic growth,” Paysinger said.

“With this grant, we can continue to hold to our pledge of allowing cadets to participate and learn free of charge,” Paysinger said. “Your faithful and unwavering support and commitment to quality education really doesn’t end inside the gates of this university. It extends well beyond. And this endowment is proof positive that it does.”

Half century of service

The Cadet Leadership Program, in operation for more than half a century, is offered at each of the LAPD’s 21 community police stations, including a cadet post at USC. The nearly 800 students in the current Cadet Academy make up the largest class in the program’s history, an indication that the need for such programs is real and growing.

As one of the world’s largest private research universities and an anchor institution in Los Angeles, USC fosters a vibrant culture of public service. In the spring, USC established a scholarship fund for LAPD officers, making its support of the LAPD Cadet Leadership Program one of the latest examples of the university’s longstanding commitment to support education, economic development and public safety through community outreach.

Nikias told the cadets and attendees that USC was proud to offer its support.

“This program reaches out to community youth, and provides students with courses on leadership, citizenship and financial literacy. It teaches young persons the importance of character and discipline. And it encourages them to become engaged in their communities, and to stand as role models for their peers,” Nikias said.

“We hope one day to welcome many of them back to USC as our own students.”

Chief Cadet Laura Mendoza is looking forward to it. A sophomore at California State University, Los Angeles, the 19-year-old cadet started as a straight-A high school student with no plans to attend college; it just wasn’t a consideration in her family. Now, she’s got postgraduate dreams of earning a Ph.D. at USC.

The LAPD Cadet Program will continue to motivate others and show them that anything’s possible if you just set your mind to it.

Mendoza credits the program for coaxing her out of her soft-spoken shell and into public speaking. The communication and life skills she’s picked up at the Hollywood division have helped her foster a better relationship with her parents at home, even as she pursues a communications degree in college.

The Hollywood division officers “helped me motivate myself and decide what I wanted to become in the future. I wasn’t getting a lot of support at home, but I’ve met several officers, several cadet advisors that said, ‘You are special, and you can do whatever you set your mind to do,’ ” said Mendoza, who dreamed of becoming a chief cadet and was now addressing the audience in that role.

“The LAPD Cadet Program will continue to motivate others and show them that anything’s possible if you just set your mind to it.”

Ryan Lopez was set on changing his life course, too. Growing up in South Los Angeles and fully aware of the graffiti and drug deals that seemed to define his neighborhood, Lopez was determined to become the first in his family to go to college.

“Since I lived so close to USC, I’d always pass by on my way home from school and I’d see these young men and women are doing amazing things with their futures,” Lopez said. “And then when I learned more what college was, the fact that it gave me a chance for a better opportunity at life, to meet new people, to travel the world, and to do all that I can to do, I said that college was the right choice for me.” 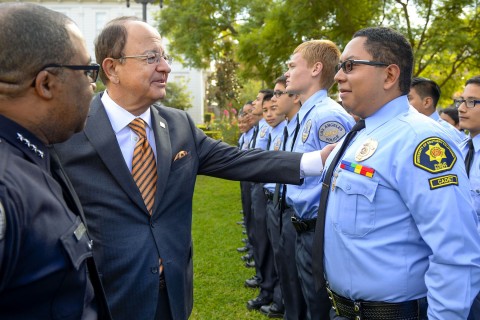 When he was 15, he joined the Cadet Program after friends praised it and upon learning that he could participate at USC. Today, three years later, he is a USC freshman, studying chemical nanoscience. He’s also picked up the trumpet, and is a member of the Spirit of Troy marching band.

“I applied to about 22 schools when I was a high school senior. I got accepted to most of them. But at the end of the day — I wanted to go across the country but I just came right back to USC,” Lopez said. “This is home. It’ll always be home.”

Lopez aspires to go on to graduate school, study astrochemistry, and – in a tangible way of paying forward his positive experiences with USC and the LAPD – return to South Los Angeles as a teacher and LAPD reserve police officer.

“The Cadet Leadership Program is not necessarily about cultivating just police officers, because that’s really not our primary objective,” Paysinger said during the news conference announcing the grant, as Lopez and dozens of other cadets stood a few feet away from the podium.

“It’s about cultivating young people and providing them the tools to be whoever they want to be and whatever they choose to be in life, regardless of what their profession may be. Like you, we just want them to be successful.”