The brainchild of juniors Axel Hellman and Ivan Kumamoto, the club had its inaugural event in late September — a “coopwarming” in the backyard of 1480 West 28th St., where Kumamoto and a dozen other Trojan chicken-fanciers live.

He and Hellman had met a year earlier at a food and gardening event and somehow started talking about chickens. Though neither had any experience with poultry, both are passionate about sustainable living.

Once they realized the city allows backyard chickens, “we decided to do it,” said Kumamoto, a business major originally from Dallas. “We started building a coop in the spring.”

If you build it, they will cluck

Over the summer, the friends negotiated a lease for a sustainability-themed house that would allow them to keep chickens. At the same time, Kumamoto was putting in 10-hour days as a volunteer laborer at a small-scale organic farm in Moorpark, California.

By August, he and Hellman were ready to purchase their flock, selecting three-month-old pullets from free-range hatcheries in Lompoc and Norco.

In the middle of the yard, a pastoral “living room” of old couches and recliners offers front-row seats to the chickens’ endless hijinks. 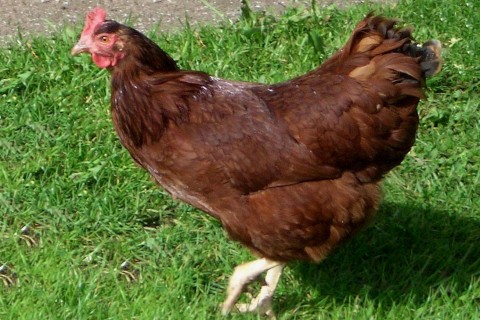 Kumamoto dotes on a Blue-laced Red Wyandotte named Jimmy Talon. “She stands on my arm while I feed her,” he said.

Most of the hens have pun-names — including masculine ones like Bw-aak Obama, Cluck Norris and Martin Luther Wing. Their christening was a group effort.

A chicken club, not a sandwich

The Trojan Backyard Chickens Club is one of more than 850 student organizations at USC. Its goal is to promote and educate students about domestic chicken keeping for eggs, meat or pets. Club advisor Robert Bridges is an associate professor of clinical finance and business economics at the USC Marshall School of Business and an experienced chicken keeper.

Kumamoto and Hellman say they hope to inspire other Trojans to set up their own backyard coops; if enough participated, they could bulk-purchase supplies such as scratch, layer pellets and grit at significant savings.

In November, the club members patched up gaps in the yard’s chicken-wire fencing and clipped the pullets’ flight feathers in anticipation of turning them loose to free-range during the daytime. The members eagerly await the arrival of their first eggs, due anytime now.

While a reliable supply of fresh, organic eggs is undoubtedly the main attraction for Trojan Backyard Chickens Club members, they’re open to other possibilities.

Asked whether the hens might one day end up in the stockpot, Hellman said, “I would strongly consider it once they stop laying. I don’t eat meat,” he adds, “but I’d make an exception if we grew it ourselves.”

To find out more about the club, contact Hellman.

Students and sustainability: Waste not, want not

The day’s activities were part of a spring break program held by the USC Wrigley Institute for Environmental Studies.

He doesn’t own a car: On any workday morning, you’ll find Matthew Oden taking the L.A. Metro Bus No. 550 southbound from West Hollywood to the USC University Park campus.

Wake up and smell the coffee

The delicious coffee that supports the livelihood of so many farmers is being threatened by one of the most harmful ailments affecting coffee plants in Latin America.