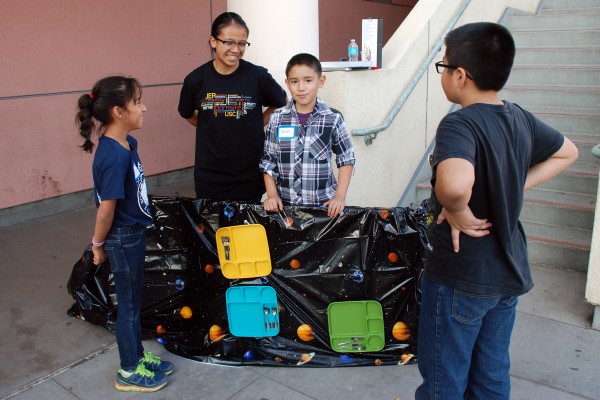 USC freshman Sophia Nguyen showed fourth- and fifth-graders how to set a table in space: Use Velcro to prevent food packages and trays from floating away.

“Look!” said fifth-grader Karla Martinez as she proudly held up a food tray to which she had attached magnets to hold cutlery in place.

Nguyen and Martinez were participating in an after-school studio on health and fitness in space. The studio, held at Norwood Street Elementary School near the University Park Campus on Nov. 10, is an initiative of the Joint Educational Project’s Young Scientists Program (YSP) partially funded by USC and JEP alumni donors Michael and Cindy Winn.

“I signed up to do the workshop because I wanted to learn about what astronauts eat and how they stick their food packages to their plates,” said Martinez, adding that she wants to be an astronaut when she grows up.

“Today I learned that astronauts float without their shoes because they don’t need to wear them in the space station. But my favorite part was the exercising station because you get to use weights to be strong.”

Nguyen, a human biology major at the USC Dornsife College of Letters, Arts and Sciences, said she is excited to be a part of YSP.

I didn’t get opportunities like this as a kid and I want to share and give back.

“I didn’t get opportunities like this as a kid, and I want to share and give back,” she said.

Funded by a grant from the Safeway Foundation, the activities at the health and fitness workshop were the brainchild of Dieuwertje “DJ” Kast, STEM programs manager for YSP and WonderKids at JEP.

Fit enough to be an astronaut?

“We want kids to ask themselves: Are you fit enough to be an astronaut?” Kast said. “How do you eat healthily in space when you can’t grow your own vegetables and you have to bring up all your own food? Did you know astronauts tend to lose muscle mass and bone density in space because of lack of gravity? Or that astronauts have to exercise for two hours a day but still have to go through rehab when they return to Earth?”

Students learned the answers to those questions and many more as they rotated among seven themed stations. At each, students watched a video of an astronaut doing a particular activity in space, then tried to perform the task themselves. A YSP teaching assistant majoring in science at USC was on hand at each station to lead the activities and answer questions.

Children started off learning about the International Space Station and how it supports life. They watched a video in which Sunita Williams, the station’s commander, gave a guided tour of the facility, showing how astronauts in space exercise and peer through a special window that allows them to look down on Earth. They even learned how astronauts go to the bathroom by using specially adapted toilets. 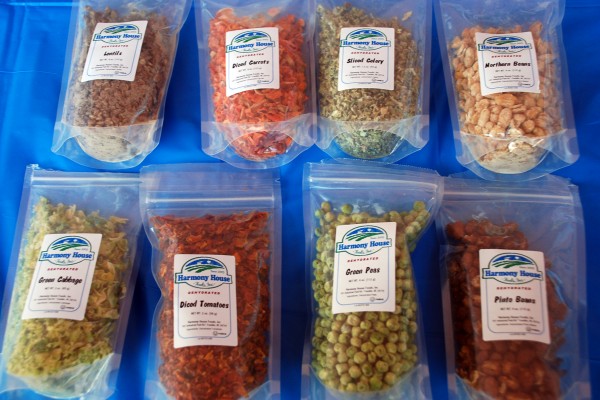 Students learned that astronauts have to rehydrate dried foods such as these to obtain nourishment in space. (USC Photo/Susan Bell)

At a space food station, students learned how astronauts eat healthy dried foods that can be preserved in space for up to 18 months. They learned how to rehydrate dried food and sampled astronaut ice cream.

At the food transport station, students learned how to use vacuum sealers to preserve food for the voyage into space.

At the sleep station, students talked about the importance of getting a good night’s sleep. They built a sleeping chamber for inflatable astronaut dolls by hooking blankets on to the side of a cardboard box to make mini-sleeping bags.

Students then got to try out exercising like an astronaut at a cardio station and a weight resistance training station.

“They lift real weights and compare that to ‘pool noodle’ weights so students can understand how weights that are heavy on Earth won’t weigh much at all in space because of the lack of gravity,” Kast said. “We have a biking station and students also do the 50-yard dash. They learn that because there is nothing holding them down, astronauts have to have a harness to hold them when they run and bike.”

Today I learned that activities we do easily on Earth, like riding a bike, are much harder in space because there is no gravity.

Garrido said he wants to be an astrophysicist.

“The thing I like best about science is the process of finding answers, like going through my hypothesis,” he said. “I especially like it when I get it wrong because then I have to think how can I improve my theory to get the right answer.”

About three years ago, JEP expanded the YSP program by introducing after-school studios to focus on topics that captured the children’s imagination but were unable to be covered in depth in the classroom because of a lack of time, said Tina Koneazny, associate director of JEP.

“Kids who are participating in YSP sign up for these after-school studios so they can really delve into a particular area of science that interests them.”

At the space food station, junior Geoff Kusaka, a human biology major at USC Dornsife and a teaching assistant with YSP, demonstrated how astronauts must rehydrate dried food by adding water to it in order to eat.

“We want the kids to understand how zero gravity will change their entire lifestyle in space,” he said.

“It’s wonderful that YSP brings a passion for science to schools around USC where kids might not otherwise get so much science instruction.”

Kusaka said participating in YSP has helped him with public speaking.

“I get to practice my communication skills, which is valuable for whatever I want to do,” said Kusaka, who speaks in front of a class of children, their teachers and sometimes their principal four times a week. “YSP has also given me a new appreciation for science now that I’m teaching it.

“I love seeing the look on the kids’ faces when they really enjoy an experiment,” Kusaka said. “It’s incredibly rewarding to see how they improve every week and how much interest they have. I love science and I hope I can instill that passion in these students.”

The interaction uncovered a previously unknown link between father and daughter, a junior at the USC Price School of Public Policy.

Weekly exercise fills an emotional and physical void for participants who live near the Health Sciences Campus.