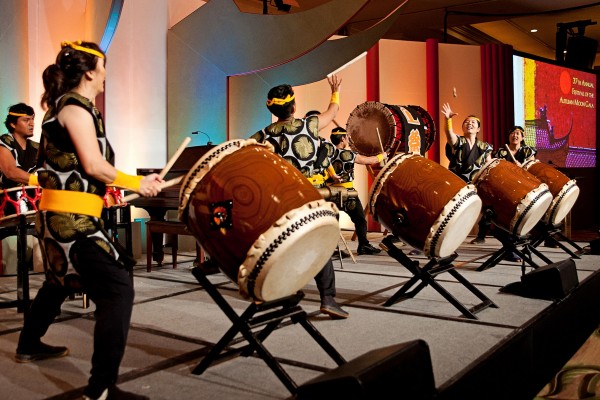 Call it a new moon.

For the first time since the alliance formed between USC and Pacific Asia Museum one year ago, more than 550 supporters and friends of the museum gathered for the annual Festival of the Autumn Moon Gala.

The event, in its 37th year, honored Dominic Ng, chairman and CEO of East West Bank, for his business and civic leadership and his passion and support of Asian art and culture.

USC President C. L. Max Nikias cited Ng’s stellar leadership in business and his passion for the arts, in addition to praising the partnership between USC and Pacific Asia Museum.

USC Pacific Asia Museum Director Christina Yu Yu thanked sponsors, volunteers and friends whose steadfast support made the evening possible and allows for the museum’s continued commitment to the arts.

Along with the gala sponsors, three separate auctions of donated items, ranging from a platinum and diamond brooch from the David Kamansky Collection to a Wolfgang Puck catered dinner with Ng, helped the museum exceed its goal of $600,000. Entertainment for the gala included taiko drummers, USC International Artist Fellow and tenor Hui Jin, USC Thornton School jazz combo and a surprise appearance by USC Trojan Marching Band.

The event generated a new level of success for the Pasadena museum in support of its programs and focus on art and culture of Asia and the Pacific Rim.

The gala, held at The Langham Huntington hotel in Pasadena, was led by a 30-member committee chaired by longtime museum supporter Priscilla Gibbs.

In the museum’s shop, 60% of the merchandise is certified as fair trade — sourced from Asian American and Asian artists, as well as L.A.-area artists.

The museum’s “Opening and Closing Weekend” will feature the first — and final — chance to visit an exhibit on identity, migration, race and gender from seven Asian female artists.