One of a handful of Latinos in American history to serve as chief of staff on Capitol Hill, lawyer and USC alumnus Sam Jammal is determined to help increase diversity in government while giving minority groups a greater political voice.

“One of my core goals is to advocate for these communities and help them achieve greater representation in the political process,” said Jammal, who last month was named one of “40 Under 40: Latinos in American Politics” by The Huffington Post. 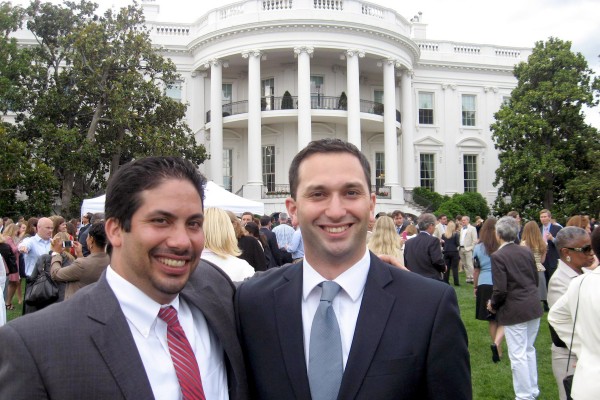 Sam Jammal, right, and his brother, Najab, on the White House lawn. After growing up in a non-political family, Jammal now serves as a chief of staff on Capitol Hill. (Photo courtesy of Sam Jammal)

Jammal, who is also of Arab-American descent, said Latino and Arab-American communities are under-represented in Congress and the political process. For Latinos, one reason may be low voter turnout: In the 2012 elections, 11 million Latinos voted but more than 12 million eligible Latinos did not, according to The Huffington Post.

“I’ve always focused on getting people out to vote and making what we do in Washington comprehensible to people so they can understand its importance in their lives,” said Jammal, who earned a bachelor’s in political science from USC Dornsife in 2004 and has a minor from USC Marshall School of Business.

“By ensuring we have more voices in the political process, we all win.”

“I’m helping to diversify government by identifying different ways we can help promote people and build that pipeline,” Jammal said. “That can be through mentorship and by helping people find different opportunities to broaden and diversify their resume. I encourage people to do campaign work to help sharpen their political skills. You can be a sharp policy person, but to get ahead in politics you’ve got to be smart politically too.”

Jammal said he was grateful to his own mentors who emphasized the value of forging good relationships to help build a successful political career: “A lot of people opened doors for me so I want to make sure I open doors for others.”

After graduating from The George Washington University Law School and then working at the Mexican American Legal Defense and Education Fund, Jammal helped develop legislation to fight English-only amendments.

“Rather than rolling back these civil rights protections, I thought why don’t we turn the tables and focus more on English language acquisition,” he said. “Learning English is something the right and left generally agree on in terms of educating people to give them the skills to succeed.”

In 2011, the White House appointed Jammal as special assistant to the undersecretary of industry and security at the U.S. Department of Commerce. In March 2013, he moved to his current position in Cárdenas’ office, where he manages teams in Washington and Los Angeles. 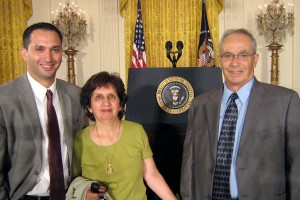 Sam Jammal (left) with his parents, Carmen and Samir Jammal, at a White House event on July 4, 2012. Carmen Jammal met President Barack Obama and shook his hand — a moment Sam Jammal described as the proudest in his life. (Photo courtesy of Sam Jammal)

Not a political family

Growing up in La Mirada, a suburb 22 miles southeast of USC, nothing seemed to destine Jammal for a political career. Jammal’s parents — a Jordanian father who worked as a restaurant manager and a Colombian teaching assistant — were not political and had no political connections.

“I remember going to an election night party as a kid for Bill Clinton with the local Democratic club, but other than voting that was probably the most political my parents ever were,” Jammal said.

When he arrived at USC in 2000, Jammal had little interest in politics and planned to join USC’s business program. In his sophomore year, 9/11 changed everything.

“The surge of anti-immigrant rhetoric that occurred in the wake of 9/11 awakened me to my identity as an Arab-American and a Latino,” Jammal said. “I started to reassess what I wanted to do with my career.”

He switched his major to political science because he saw the political process as a means for communities to develop a stronger voice.

“Sometimes in life your priorities change,” he said.

While a student at USC Dornsife, he took on internships to build connections. He interned at the Sierra Club, then the California Democratic Party. He spent the summer of 2002 in Washington, interning with the American Civil Liberties Union.

The following year, Jammal participated in the USC Dornsife Washington, D.C., Semester Program and interned in the U.S. Senate with the Democratic Leadership Office. In his senior year, he joined John Kerry’s presidential campaign, creating Students for Kerry at USC and running as a delegate to the 2004 Democratic National Convention.

[Attending the Democratic convention] was an amazing experience — hearing all those speeches and meeting folks you’ve only read about or seen on TV.

“As a 22 year old, I was one of the younger delegates at the 2004 Democratic convention,” he said. “It was an amazing experience — hearing all those speeches and meeting folks you’ve only read about or seen on TV.”

As a law student, Jammal was active in Barack Obama’s presidential campaign, organizing students and serving as a delegate at the 2008 Democratic convention.

His career has given him the opportunity to work in advocacy, experience how Congressional offices work and understand how policy is formulated.

However, his proudest moment came when he was able to take his parents to a White House event on Independence Day 2012.

“My mom was able to shake the president’s hand. To be able to give my parents that remarkable experience felt wonderful,” Jammal said. “My parents came to this country with very little, but their kids have been able to realize the American dream. I want to give back and ensure others have the same educational and economic opportunities to succeed.”

Californians say they want change but still approve of Sens. Boxer and Feinstein