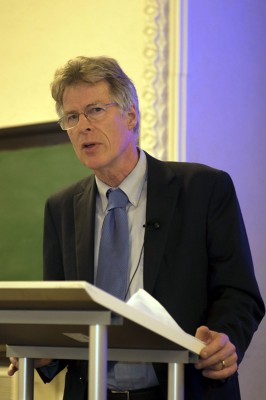 Iran’s quest for self-sufficiency has deep historical roots that are as much economic and cultural as political, an Iranian studies expert said as the USC Dornsife-Farhang Foundation Iranian Studies Initiative kicked off its annual distinguished lecture series.

“Well before the advent of abundant oil wealth, Iranians have tended to see their country as a unique nation amply endowed with natural resources that could take care of itself without outside assistance,” said Rudi Matthee, distinguished professor of history at the University of Delaware. “If only meddling outside forces and foreign powers would allow it to do so.”

A presiding sentiment in Iran is that “the world needs Iran more than Iran needs the world,” said Matthee, former president of  the Association for the Study of Persianate Societies. While Iran has historically participated in foreign trade, the nation’s leaders have become more concerned about upholding a sense of pride about the country’s cultural greatness than the issue of trade, he said.

Economics can never be divorced from cultural notions, he added. The ideal of “autarky” — an economically self-sufficient and independent state — is not unique to Iran, but autarky is an ethos that has strongly informed Iran’s economic decision-making and has served as a development strategy over the last few centuries.

Matthee emphasized that while Iran has articulated its quest for self-sufficiency more than other developing nations, it still remains open to the world at large.

“Iran is not North Korea, after all,” he said. “Iranians have always sought self-sufficiency, and have been proud of their unique country, but yet it never fails to enthusiastically embrace the world and engage with it in many ways.”

This lecture seeks to dispel stereotypes and dismiss simplistic categories like ‘East’ and ‘West’ in trying to understand Iranian culture and politics.

“More generally, this lecture seeks to dispel stereotypes and dismiss simplistic categories like ‘East’ and ‘West’ in trying to understand Iranian culture and politics,” she said.

The first steps of the initiative involved the hiring two full-time faculty members, one for Persian language and the other for Iranian history and culture. Last fall, USC Dornsife began offering a minor in Iranian studies under the auspices of the Middle East Studies Program.

“The distinguished lecture series that we are launching now, as well as the conference on Iranian Culture and Diaspora we are planning for April 2015, are signature events in the further development and strengthening of the Iranian Studies Initiative on the USC campus,” Brand said.

Farhang, a nonreligious, nonpolitical and nonprofit foundation based in Los Angeles, seeks to celebrate and promote Iranian art and culture.

Joe Dorri, a senior majoring in psychology at USC Dornsife who attended the lecture, said the series will help him better understand Iran’s past and present, and how U.S.-Iran relations can be improved.

“The Middle East Studies Program at USC Dornsife is a wonderful step toward increasing social awareness and promoting personal action as a world citizen,” he added.

USC Dornsife faculty, students and alumni show how it can be done.