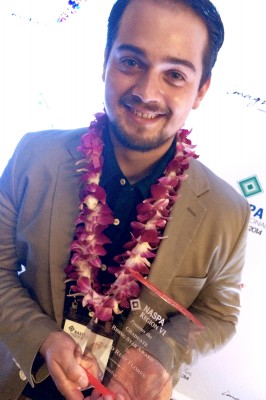 Julio Flores with his Graduate Rising Star Award at the Western Regional Conference of the National Association of Student Personnel Administrators. (Photo/Kristan Venegas)

Julio Flores traces the beginning of his career path to the moment he received discouraging advice from a community college counselor.

“You’re not cut out for higher education,” he was told, “so why don’t you try to become an auto mechanic?”

Instead, Flores set into motion a plan to make himself a community college counselor. “I wanted to give students the kind of help I needed at that time,” he says.

On Tuesday, that trajectory brought the USC Rossier School of Education graduate student onto a stage in Anaheim, where he received the Graduate Rising Star Award at the Western Regional Conference of the National Association of Student Personnel Administrators (NASPA).

Flores is in his second year in the Rossier Master’s program in Education Counseling (EC), which blends a counseling-based theoretical foundation with practical applications in student affairs.

“Our EC program is only five years old, but has consistently drawn strong students like Julio who are committed to student affairs and issues of social justice,” says Kristan Venegas, associate professor of clinical education at Rossier.

Venegas says Julio has served as an informal leader in his program. “He’s a ‘connector’ and freely shares his resources with his classmates,” she says.

Flores’ progression as a connector has been continual since that setback early in his college career. He transferred to another community college, Rio Hondo College, where he found support, then went on to Cal Poly Pomona, where he fell under the tutelage of Kevin Colaner EdD ’06, associate vice president of student services there.

By then Flores was involved in NASPA’s Undergraduate Fellows Program, which pairs students with mentors to increase the number of historically disenfranchised and underrepresented professionals in student affairs and higher education. Colaner helped groom Flores while also building his interest in attending USC Rossier. (At the time, Colaner was an adjunct professor at Rossier.)

One part networking strategy, another part job training, the organic process of connecting with mentors suits Flores’ natural abilities to identify role models who will show him how he can pay the craft forward.

Under the guidance of Venegas, Flores has excelled in the EC program but no longer sees himself joining the staff at a community college. Instead he’s applying to PhD programs in urban education.

“In this new path that I’m taking, I’ll still get to help students,” he says, “but I’ll get to help them on a larger scale.” Instead of giving one-on-one support he’ll identify and research the factors that can help students complete four-year degrees in programs throughout the country.

“Dr. Venegas is always challenging me,” he says. “At least every other week I get a message from her with a link to a conference or fellowship — ‘You should go for this.’ ”

Just a few weeks ago the two appeared on a panel at the College Board Forum conference in Las Vegas, speaking about financial aid issues for undocumented students. Venegas tweeted in real time: “@USCRossier EC student Julio Flores: Many efforts related to undocumented students have been student led.”

Mentorship, too, can be student led, as Flores has found out.

I think that mentoring is far more than what a student gets from his or her mentor. It’s a two-way relationship.

“I think that mentoring is far more than what a student gets from his or her mentor,” he says. “It’s a two-way relationship.”

As a graduate advisor for USC’s Program Board, a branch of the Undergraduate Student Government, Flores has been learning this firsthand. He recently found himself encouraging a student who was ready to give up pursuing an academic career. “I tried to remind her how passionate she was,” he recalled, sharing some of his own experiences with her and in the process learning a little bit more about what made him tick.

“I think passion can take you a long way,” he said, speaking to himself as much as he was to the young student he was counseling.

USC Price and Mount Vernon engage in a discussion of governance.