With Veterans Day approaching, USC students had multiple opportunities to engage directly with one of the nation’s most decorated military leaders — retired four-star general and former CIA director David Petraeus.

Petraeus, a Judge Widney Professor with a joint faculty appointment at the USC Price School of Public Policy, returned to campus during the week of Nov. 3, participating in roundtable discussions on Mexico and China, answering questions from USC Price students about career planning and passing on his expertise in leadership.

Also on Petraeus’ full schedule was a visit to see  trauma training at the Keck School of Medicine of USC. He spoke to students in the Master of Business for Veterans program at the USC Marshall School of Business. He opened USC’s Veterans Resource Center. And he took part in an early morning run around the Los Angeles Memorial Coliseum with ROTC cadets. 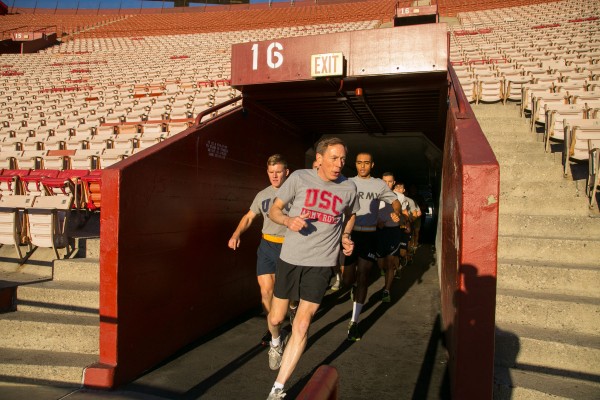 Petraeus sat down with 14 USC Price graduate and undergraduate students, fielding questions about his academic interests, how future changes in defense will affect policy analysts, how to effectively prepare for public service careers and how to deal with decisions that produced negative outcomes.   He advised students to have measured expectations early in their careers.

“There are situations where people are really fired up, thinking they’re going to work at the Department of State or be a foreign service officer, and then they realize when they join that the first three years are going to be spent stamping people’s passports and doing consular activities or something like that,” Petraeus said.

Petraeus’ advice was well received by the students.

“It’s great to see someone who was at the pinnacle of what I would like to accomplish be able to sit down with us and say these are the tools you need to be successful, but you need to be realistic that it may take time, that your goals may not necessarily be met and to prepare yourself for an alternate strategy,”   said Jeff Wolf, a second-year MPA who served 14 years with the U.S. Coast Guard and is currently an active reservist. 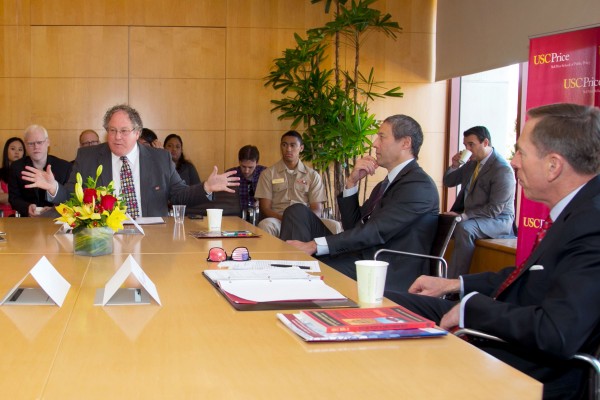 In a discussion with USC Price Professor Eric Heikkila, USC Dornsife College of Letters, Arts and Sciences Professor David Kang, USC U.S.-China Institute Director Clayton Dube and postdoctoral research associate Chin-Hao Huang, Petraeus explained how he thought Chinese President Xi Jinping’s goal in attacking corruption was to take an issue of great concern to the people and use it to strengthen his position as party leader.

“It’s certainly helped him consolidate his power very quickly, getting rid of some challengers,” Petraeus said. “Whether it has truly improved the legitimacy of the party remains to be seen.”

I think it is at least arguable that President Pena Nieto has been the most effective political leader in North America maybe since Bill Clinton.

Petraeus also addressed the reforms being instituted by Mexico President Enrique Pena Nieto in a discussion with Carlos M. Sada, the Consul General of Mexico in Los Angeles, and USC Dornsife professors Pamela Starr and Gerardo Munck. He asserted that in passing 16 constitutional reforms in a single year and pushing through energy implementation legislation, Pena Nieto accomplished more than his three predecessors did during 18 years in power.

“I think it is at least arguable that President Pena Nieto has been the most effective political leader in North America maybe since Bill Clinton,” Petraeus said. Later in the day, the general met with the former U.S. President, who was speaking on campus as part of the USC President’s Distinguished Lecture series.

Speaking to students of the USC Price Executive Master of Leadership program, Petraeus stressed using different leadership styles, depending on the situation.

“One of the biggest takeaways that I will offer you would be that leadership style has to vary and you have to be sufficiently adept, flexible, adaptable and perceptive to realize what leadership style is required to bring the best out of each individual and the organization overall,” Petraeus said.

At USC Marshall, Petraeus discussed his research interests in the context of future business directions and opportunities for the 50 active-duty military members and veterans, who are building foundational business skills in the college’s one-year MBV program while learning how to transfer their management and leadership experience to the private sector.

Petraeus also attended a reception for 50 distinguished guests on Nov. 6 at the home of David and Amy Hochman, dedicated supporters and volunteers at USC Price. The reception offered guests a unique opportunity to hear directly from Petraeus on a wide range of topics related to global security policy.

The thing that really came across to me is he personified what we’ve learned in class.

“The thing that really came across to me is he personified what we’ve learned in class,” said Simon M. Flores, an EML student who works for the USC Alumni Association. “Professor Bob Denhardt talks about leadership as energy, and that energy really came through in the general’s presence here and how he describes his leadership style. It was that energy that enabled him to lead such large organizations.”

Amy Blumenthal and Megan Goulding contributed to this report.

By the numbers: how USC helps veterans

USC has a long tradition of supporting U.S. veterans. Here’s a look at some of the numbers.

The university – which opened its new service center just before Veterans Day – has a long relationship with the country’s military men and women.

Full slate of events planned in honor of Veterans Day

Activities include distribution of yellow ribbons and tasting of Meals Ready to Eat.

Petraeus gets up close with students during weeklong visit