A long-held belief that offshore islands protect the mainland from tsunamis turns out to be the exact opposite of the truth, according to a new study.

Common wisdom — from Southern California to the South Pacific — for coastal residents and scientists alike has long been that offshore islands would create a buffer that blocked the power of a tsunami. In fact, computer modeling of tsunamis striking a wide variety of different offshore island geometries yielded no situation in which the mainland behind them fared better.

Instead, islands focused the energy of the tsunami, increasing flooding on the mainland by up to 70 percent.

“This is where many fishing villages are located, behind offshore islands, in the belief that they will be protected from wind waves. Even Southern California residents believe that the Channel Islands and Catalina will protect them,” said Costas Synolakis of the USC Viterbi School of Engineering, a member of the multinational team that conducted the research. 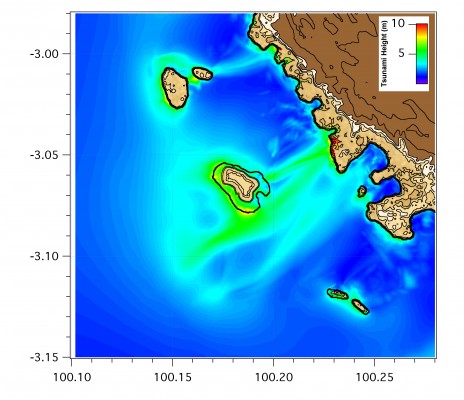 A 2010 survey focused on the Mentawai Islands off of Sumatra. (Image/Jose Borrero and eCoast)

The research was inspired by a field survey of the impact of the 2010 tsunami on the Mentawai Islands off of Sumatra. The survey data showed that villages located in the shadow of small offshore islets suffered some of the strongest tsunami impacts, worse than villages located along open coasts.

Synolakis then teamed up with researchers Emile Contal and Nicolas Vayatis of Ecoles Normales de Cachan in Paris; and Themistoklis Stefanakis and Frederic Dias, who both have joint appointments at Ecoles Normales de Cachan and University College Dublin to determine whether that was a one-of-a-kind situation, or the norm. Their study, of which Dias was the corresponding author, was published in Proceedings of the Royal Society A on Nov. 5.

The team designed a computer model that took into consideration various island slopes, beach slopes, water depths, distance between the island and the beach, and wavelength of the incoming tsunami.

“Even a casual analysis of these factors would have required hundreds of thousands of computations, each of which could take up to half a day,” Synolakis said. “So instead, we used machine learning.”

Machine learning is a mathematical process that makes it easier to identify the maximum values of interdependent processes with multiple parameters by allowing the computer to “learn” from previous results.

The computer starts to understand how various tweaks to the parameters affect the overall outcome and finds the best answer quicker.   As such, results that traditionally could have taken hundreds of thousands of models to uncover were found with 200 models.

“This work is applicable to some of our tsunami study sites in New Zealand,” said Borrero, who is producing tsunami hazard maps for regions of the New Zealand coast. “The northeast coast of New Zealand has many small islands offshore, similar to those in Indonesia, and our modeling suggests that this results in areas of enhanced tsunami heights.”

“Substantial public education efforts are needed to help better explain to coastal residents tsunami hazards and whenever they need to be extra cautious and responsive with evacuations during actual emergencies,” Synolakis said.

The research was funded by EDSP of ENS-Cachan; the Cultural Service of the French Embassy in Dublin; the ERC; SFI; University College Dublin; and the EU FP7 program ASTARTE.

The earthquake zones off of certain coasts — such as those of Japan and Java, Indonesia — make them especially vulnerable to tsunamis, according to a new study.

On the one-year anniversary of the devastating Japanese tsunami, engineers from the USC Viterbi School of Engineering Tsunami Research Center are working with the state of California to better understand the damaging currents caused by tsunamis.