Before he was global Top 40 sensation and socially conscious singer-songwriter Aloe Blacc, he was Egbert Nathaniel Dawkins III ’01, a linguistics and psychology major at the USC Dornsife College of Letters, Arts and Sciences.

Even then, Blacc was determined to use his talents for positive social change. Although he considered music a hobby and his future to lie in business or academe, he occasionally allowed himself to daydream about how winning fame as a performer could help him fast-forward his philanthropic goals.

When I was in school, I was influenced by the civic leadership I saw demonstrated by USC professors and programs.

“When I was in school, I was influenced by the civic leadership I saw demonstrated by USC professors and programs,” Blacc said. “I always thought, if I get the chance I’d really like to use my celebrity and social capital to create change, whether through standing for international peace, furthering medical research or reducing poverty.

“Now I’m fortunate enough to be in that position.”

Born in Laguna Hills to Panamanian parents, Blacc described his childhood as “a simple suburban upbringing in a quiet town.”

However, it was far from dull. His parents spoke Spanish and their home was filled with aromas from his mother’s Caribbean cooking and exotic sounds — salsa, merengue, calypso — from his father’s stereo.

Blacc began writing hip-hop lyrics at age 9 and took up the trumpet. In high school, he played in the orchestra and marching band. He also started making hip-hop music, teaming with producer Aleksander Manfredi, better known as Exile, and forming Emanon, a mainstay duo of the underground rap movement.

At USC, Blacc, a Renaissance and Trustee Scholar who described himself as “very studious,” didn’t promote his music, except for one campus talent show he entered at the urging of friends. He won with a cheeky song titled “I Love USC,” which became a tailgate hit. Upon graduating in 2001, he landed a corporate job but was laid off, allowing him to concentrate on music.

By the mid-2000s, despite Emanon’s success, the bravado and machismo of rap no longer felt comfortable, and Blacc “decided to focus on affecting emotions, rather than projecting my own.”

In 2006, he signed to Stones Throw Records and released his debut solo album, Shine Through, followed by 2010’s Good Things.

His big break came the same year when the song “I Need a Dollar” was chosen as the theme for HBO’s How to Make It in America. The song sold 2 million copies worldwide, while Good Things went gold in France, Germany and the U.K. 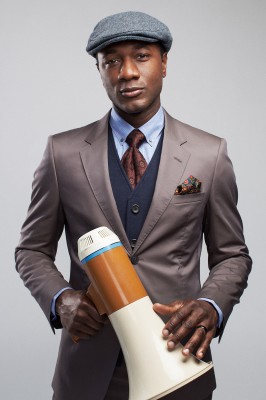 Blacc got his break with the song “I Need a Dollar.” (Photo/Reid Rolls)

“In the past I’ve written very specific lyrics about certain issues, but those don’t tend to be the most popular songs,” he admitted.

Instead, Blacc began creating thoughtfully crafted videos for songs such as “Wake Me Up,” in which he teamed with the National Day Laborer Organizing Network to speak out in favor of immigration reform, and “Love Is the Answer,” which challenges suspensions for “willful defiance” in California schools.

“I like to use my videos in conjunction with a social message or nonprofit organization, so my music stands for something more than just another pop song,” he said.   “The idea is to take a cue from Bob Marley or Marvin Gaye. A song like Marley’s ‘One Love’ does more than any protest song I could write.”

His advice to USC students? Blacc chooses his words carefully.

“Enjoy your passion for art and use your educational experience to inform it and help you find perspective. Find a way to communicate compassion, whether that’s by creating social programs or through community involvement.”

I believe our most important challenge is fair distribution of resources.

“I believe our most important challenge is fair distribution of resources, so everyone has basic, sustainable levels of health care, education and nutrition.”

Blacc believes that food deserts — an area where affordable and nutritious food is inaccessible, particularly for those without a car — can be eradicated. Food can be cultivated in these areas if people come together, he said.

“My goal is to work with communities to transform food deserts into food oases. I hope to inspire change the way Sean Penn is doing for Haiti or Don Cheadle and George Clooney are doing for Darfur.”

Yes, you can tell everybody. He’s The Man.

Peter and Jennifer Buffett, founders and co-chairs of the NoVo Foundation, gave their thoughts on philanthropy on March 20 as part of the Distinguished Speaker Series hosted by the USC Center on Philanthropy & Public Policy.

Exercising the gift of philanthropy at Keck Hospital

Philanthropic giving by California’s foundations jumped from $2.8 billion to $6 billion over the past decade despite two economic recessions during that period, a new USC analysis announced today shows.

More than 220 philanthropic leaders from across the nation came together in Los Angeles to consider how philanthropy can have the greatest impact.

A singer’s fame and fortune lead to philanthropy