Now in its centennial year, USC’s proud relationship with the armed services passed a much-anticipated milestone when the Division of Student Affairs officially opened the USC Veterans Resource Center on Nov. 5 — the first in a series of events through Veterans Day.

Located on the third floor of the Ronald Tutor Campus Center, the 1,300-square-foot facility for the first time gives student-veterans a home on campus — especially important given that most are commuters. The center provides a lounge and conference area, public computer stations and three private offices where veterans can receive one-stop services ranging from Veterans Affairs certification to academic advisement.

One in a series of stories about veterans at USC

Gen. David Petraeus joined USC President C. L. Max Nikias and Board of Trustees Chairman John Mork at the dedication. The retired four-star general and former CIA director is a Judge Widney Professor and faculty adviser to the USC Student Veterans Association, whose members identified a resource center as a top priority.

“To see the seriousness of ’SC in its commitment to those who have raised their right hand in the wake of 9/11, knowing that reciting that oath meant they’re going into combat — to see how ’SC is living that obligation, is really wonderful,” Petraeus said during the facility’s dedication. “It makes me feel really proud to be part of this great Trojan family.”

Petraeus saluted Nikias for his leadership in working to improve the student-veteran experience.

Supporting the military, Nikias stressed, is a Trojan tradition.

This university has a history of serving those who have served our nation.

“As you all know,” he said, “this university has a history of serving those who have served our nation. Their presence and contributions forever changed the culture of our campus.”

The new Veterans Resource Center, Vice Provost for Student Affairs Ainsley Carry noted, is part of “our consistent and continuing efforts to increase our standing as a veteran-friendly campus.”

As Trojans look back, 2014 has been a banner year in terms of veteran-friendliness.

USC doubled the number of Yellow Ribbon grants it awarded to student-veterans. Sponsored by the U.S. Department of Veterans Affairs, the program supplements tuition and fees not covered by the Post 9/11 GI Bill, currently capped at $20,235 for private universities.

Under Yellow Ribbon, participating USC departments award $10,000 to graduate students and $6,000 to undergraduates; in 2014, the university awarded 239 such grants worth $2.3 million. The VA matches those amounts, making a USC education affordable to military and family members of veterans.

We received lots of grateful letters, including one from a kid who is now an undergraduate at USC.

“We had kids from all branches of the military, from bases across the country as well as Germany, Japan and South Korea,” said Mark Todd, associate provost for academic affairs. The awards, worth about $8,000 each, covered all student expenses, including airfare.

“We received lots of grateful letters, including one from a kid who is now an undergraduate at USC,” Todd said. His goal for next year is to raise $400,000 — enough to fund 50 pre-college scholarships for children of military families.

In all, some 896 students at USC are certified service members, veterans or military dependents, according to associate registrar Bob Morley. About a quarter of them are undergraduates, the vast majority entering as transfers from area community colleges. And 174 are cadets enrolled through USC’s three ROTC programs.

To increase the admission of qualified veterans, Bruce Grier, associate director of transfer admissions, has started training his colleagues to recognize the signs of excellence in a military record.

He pointed to the rank of Marine gunnery sergeant. “All the ones I’ve worked with at USC have graduated, even when they didn’t arrive with the strongest academic record,” Grier said.

Three-quarters of USC’s student-veterans attend graduate schools, and expanding those opportunities is a high priority. The pioneering Master of Business for Veterans program at the USC Marshall School of Business welcomed its second cohort of students this fall. The 10-month program leverages unique skills acquired in the armed forces for use in the corporate arena.

The challenge is to help veterans translate ‘soft skills’ like leadership and management on the resume.

“The challenge,” said program director James Bogle, “is to help veterans translate ‘soft skills’ like leadership and management on the resume. How does a business benefit from hiring an infantry officer who has led people into combat?”

The MBV program also “fills in the holes,” Bogle said. “You don’t learn how to read a company’s financials by commanding an artillery battery.”

Thirty-seven of the 38 students in the inaugural MBV class had jobs by graduation day. A third were new positions with top-tier companies like Disney, Kaiser-Permanente and Goldman Sachs.

The USC School of Social Work, meanwhile, has graduated 115 veterans from its military social work program. Introduced in 2010, the concentration has more than 700 alumni.

In September, the school’s Center for Innovation and Research on Veterans & Military Families (CIR) released the first comprehensive study of a large urban military population, based on surveys of nearly 1,400 veterans in Los Angeles County. More than two-thirds reported difficulties adjusting to civilian life; nearly eight in 10 had left the military expecting to quickly find meaningful employment.

“With this data, Los Angeles is now poised to be an example for other communities across America on how to come together to support the holistic needs of veterans when they return home,” said CIR Director Anthony Hassan, a clinical professor in the USC School of Social Work and retired Air Force officer.

Other programs with strong ties to the armed services include the Department of Defense-affiliated USC Institute for Creative Technologies, the USC Viterbi School of Engineering’s Aviation Safety and Security program and the Keck School of Medicine of USC’s Navy Trauma Training Center. The USC Price School of Policy and the USC Rossier School of Education also enroll significant numbers of veterans, service members and military dependents each year.

USC is on the lookout for more synergies.

“I want to partner with military-affiliated educational institutions, war colleges and academies,” said Associate Provost Todd. “What does USC have that they don’t have? I want to make sure we’re getting out there and using our talent to serve their needs.” 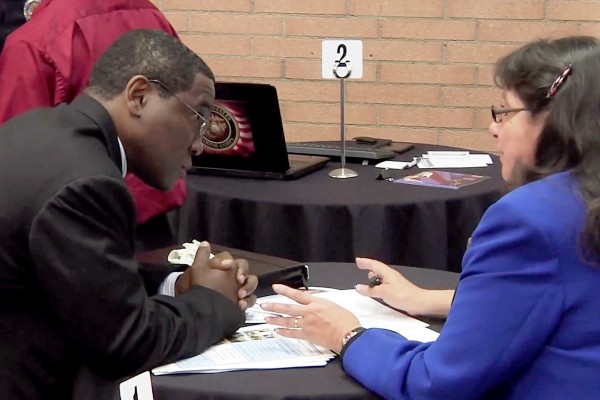 The university also has stepped up its efforts to help veterans find jobs, both on campus and off.

As a direct result of the fair, 40 veterans received job offers — 10 of them from USC — with starting salaries in the $50,000 to $60,000 range, according to recruitment manager David Brown. That’s far better than the average starting salary for veterans in the Los Angeles area, which USC social work researchers peg at less than $37,000.

And in September, USC began offering $200 bonuses to any employee whose referral leads to the hiring of a veteran.

The hiring of veterans at the university has gained steam with the recent addition of Alby Bocanegra, USC’s new diversity recruiter/veterans advocate, himself an Army veteran.

“Alby was hired to build and refresh that community, to develop a pipeline of veteran candidates,” Brown said at a recent meeting of the university-wide Military Support Committee.

The newly formed body, chaired by Todd, is reviewing all USC operations to make sure they’re military friendly in compliance with the VA’s Principles of Excellence.

Improvements are in the pipeline:

• Next semester, the Provost’s Office will roll out a mentorship program pairing student-veterans with faculty and staff volunteers who are themselves veterans or military spouses. During weekly meetings, the mentees will work toward achieving clearly defined competencies needed to succeed at USC.

• Both the Provost’s Office and the USC Veterans Association are working to improve communications with area community colleges, which should serve as feeder schools to USC but where veterans too often receive misinformation.

The cost and the status of USC deters many vets from applying.

“The cost and the status of USC deters many vets from applying,” said USC Veterans Association President Michael Johnson, an aerospace engineering major. “My first counselor at Pasadena City College wasn’t helpful, trying to get me to go to a state school.”

Johnson, 28, a Marine veteran who served two tours of duty in Iraq and suffered traumatic brain injuries from multiple IED blasts, is creating a network of current Trojans to do outreach at area community colleges.

“There are just so many great things going on here,” Todd said. “We have this very proud history. We need to package all these things together.”

By the numbers: how USC helps veterans

USC has a long tradition of supporting U.S. veterans. Here’s a look at some of the numbers.

The social work program allows her to get specialized education working with military populations.