The USC Viterbi Startup Garage opened its doors last summer with the goal of spawning a wave of dynamic, high-tech companies in Southern California that could one day blossom into the next Amazon or Google.

Toward that end, the business accelerator’s 10 inaugural teams — all led or co-founded by USC Viterbi School of Engineering students and alumni — received seed capital, mentoring, legal advice, office space in Marina del Rey and other strategic resources to help them succeed. Over the course of three months, the group of budding business builders wrote or perfected business plans, built product prototypes and devised sales and marketing pitches.

So what happened when these young entrepreneurs graduated from the security of the Startup Garage?

Many of them went out and raised millions of dollars, underscoring the accelerator’s success and value in helping to transform ideas into viable businesses.

To date, five companies that graduated from the accelerator’s first class have raised a total of $5.9 million in follow-on capital that has allowed them to rent offices, hire new employees, ramp up marketing efforts and secure manufacturing and distribution networks.

“We’re just getting started and have a long way to go, but we’re definitely an increasingly important contributor in the Los Angeles startup ecosystem,” said Ashish Soni MS ’03, founding director of the Viterbi Student Institute for Innovation (VSI2), which launched the Startup Garage. “USC Viterbi is not just a source of great talent, but we’re also a source of great companies.”

On Oct. 20, for instance, Startup Garage alumnus MediaHound Inc. announced securing $4.5 million in funding. That same day, the company launched its Web and iPhone apps to help consumers search for, collect and share their favorite entertainment content, ranging from movies and shows to books, music and videogames. While continuing to build on its proprietary graph database, The Entertainment Graph, MediaHound will also use the money to grow its team, enhance its core technology and acquire new customers. 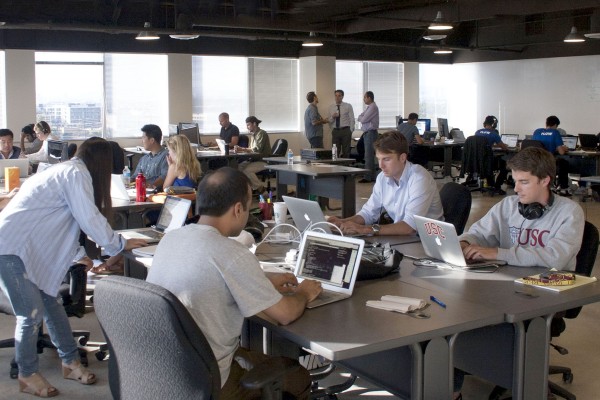 Although MediaHound entered the Startup Garage as a fledgling business, the company used its time there to expand the offerings of its entertainment app beyond movies and television, Chief Executive Addison McCaleb said. Team members especially appreciated the mentoring provided by the Startup Garage, he added.

“Our time in the Garage helped us hone the pitch and the vision for the platform,” McCaleb said, “and 100 percent contributed to us completing our round.”

For AIO Robotics, the accelerator led to an introduction to a USC alumnus who ponied up $25,000 of the $175,000 the 3-D printing company has raised to date. AIO Robotics, manufacturer of Zeus, the world’s first all-in-one 3-D printer that prints, scans, copies and faxes, has received several plaudits for its machine. Forbes.com called Zeus “a game changer.”

Tilofy, another recent graduate, has also won favorable coverage from Forbes.com, which described its just-released Watsup app as “a mobile technology [that] brings us one step closer to omniscience.”

At the business incubator, the Tilofy team developed and enhanced Watsup. The app takes users’ location information, pairing it with data from multiple social media platforms and other online resources to deliver a real-time view of what’s happening nearby, encompassing everything from cool restaurants to plays to poetry readings to lectures — whatever interests them. The company hopes to launch Watsup in the world’s top 100 cities by the end of 2015, said Chief Executive Ali Khoshgozaran PhD ’10.

“Having the USC involvement and Startup Garage brand behind us was instrumental in helping us receive new funding,” said Khoshgozaran, adding that Tilofy has raised $600,000 of its $1 million in funding since leaving the business accelerator.

The Garage provided us with a level of credibility with investors and served as our foundation.

Taggler, a business that graduated from the Garage in 2013, serves as an online marketplace that brings together screen printers and customers looking for customized T-shirts at a good price. Taggler, which raised $500,000 in May, counts Georgetown, the University of California, Berkeley, Stanford University and the University of Wisconsin among its growing list of clients. The nearly profitable company expects sales to triple to $300,000 this year.

“The Garage provided us with a level of credibility with investors and served as our foundation,” Chief Executive Jason Wei ’14 said.

For Moving Analytics, the Startup Garage provided the “entrepreneur instinct,” “street cred” and much more, said Chief Executive Harsh Vathsangamn PhD ’11. The business, co-founded by Gaurav Sukhatme, chair of the Department of Computer Science, has raised $125,000 toward its Movn app that encourages people with recent heart surgeries to exercise.

“What the Garage taught me is how to make deals, how to identify gaps in our business model hypotheses and work to plug them in,” Vathsangam said. “I’m not saying I’m perfect in any of this, but I’m 1,000 times better because I attended the Garage.”

On the fifth floor of USC’s Information Sciences Institute, about 40 budding entrepreneurs sat together at large nondescript tables hatching plans for the next Great American Startup.

The venture accelerator for engineering-led startups aims to produce the Next Big Thing.

The Viterbi Startup Garage, an early-stage technology accelerator designed to provide financial and other strategic resources to a select group of USC student and alumni entrepreneurs, was launched by the USC Viterbi School of Engineering.