At a time when education has surpassed the economy as the top priority for California voters, the race for State Superintendent of Public Instruction is neck and neck, according to the latest USC Dornsife/Los Angeles Times poll.

Among likely voters, incumbent Tom Torlakson leads challenger Marshall Tuck by a slim margin of 32-29 percent. Among all registered voters, Torlakson has a 30-28 percent lead over Tuck.

The context for the tight race is the emergence of education as the most important issue in the election for governor of California. Forty-two percent of likely voters rated education as their number one priority, followed by the economy (37 percent), water and drought issues (27 percent), crime and public safety (16 percent), taxes (17 percent), and the state budget deficit (13 percent).

There’s no precedent for what’s happening in this race.

“There’s no precedent for what’s happening in this race,” said Dan Schnur, director of the USC Dornsife/Los Angeles Times Poll and executive director of the Unruh Institute of Politics of USC.

“I can’t think of a down-ticket office in recent California history that’s received so much attention,” Schnur said. “Some of that is the relative lack of competition at the top of the ballot, some of it is lack of extremely compelling ballot initiatives, but a lot of it is the emergence of education as such a top-tier issue for California voters. What you’re seeing in this race is a predictor for a very long and divisive debate over education reform in California.”

While Tuck is supportive of the ruling in Vergara v. California, which in June found the state’s tenure and layoff policies for public school teachers to violate the constitutional rights of students, Torlakson has been among those seeking to appeal the ruling. 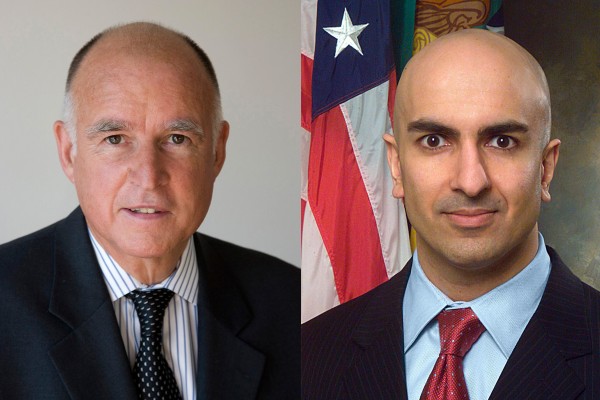 Jerry Brown, left, and Neel Kashkari face off in the governor’s race. (Photos from the candidates’ websites)

In the race for governor, incumbent Jerry Brown continues to hold his lead over Republican challenger businessman Neel Kashkari. Fifty-six percent of registered likely voters said they would cast their ballot for Brown, while 37 percent would vote for Kashkari. Brown’s support has remained relatively steady since a September 2014 USC Dornsife/Los Angeles Times Poll; Kashkari’s support has climbed by one point.

Name recognition also remains something of a challenge for Kashkari. When likely California voters were asked if they knew the name of the Republican candidate for governor, only 30 percent of voters identified Kashkari. Sixty-seven percent were unsure of the candidate’s name altogether. Recognition for Kashkari has ticked up slightly since the September 2014 poll, when 25 percent of likely voters named him as the Republican candidate and 75 percent were unsure.

California now has one of the most popular governors in the country, even as the state faces some unique challenges in terms of water and other big issues.

“California now has one of the most popular governors in the country, even as the state faces some unique challenges in terms of water and other big issues,” said Drew Lieberman, vice president of Democratic polling firm Greenberg Quinlan Rosner Research. “People are giving him credit. He’s much more closely associated with the things that have gotten better in the state since taking office than with any pessimism or concern over the big issues.”

However, 46 percent of likely voters still say the state is headed on the “wrong track,” though that number has been decreasing over time. Forty-nine percent agreed with that statement in the September 2014 poll compared to 82 percent who agreed in a March 2010 USC Dornsife/Los Angeles Times Poll. Forty-one percent of likely voters feel that the state is going in the “right direction,” up slightly from 37 percent in September 2014.

According to the USC Dornsife/Los Angeles Times Poll, Propositions 1 and 2, which Brown has been promoting leading up the election, as well as Prop. 47 have strong majority support from likely voters. Likely voters oppose Propositions 45 and 46.

Proposition 1, which would authorize $7.545 billion in general obligation bonds for state water supply infrastructure projects, has the support of 61 percent of likely voters with 25 percent in opposition. That number has dropped only slightly since a September 2014 USC Dornsife/Los Angeles Times Poll, which found 64 percent of likely voters supporting the initiative, with 22 percent in opposition.

Fifty-four percent of likely voters favor Proposition 2, with 26 percent opposed. The ballot initiative would require an annual transfer of state general fund revenues to a budget stabilization account, with half the revenues being used to repay state debts and the remaining funds earmarked for emergencies or budget deficits.

Proposition 47 also enjoys a strong lead with 56 percent of likely voters backing the initiative and 27 percent in opposition. The initiative would require a misdemeanor sentence instead of a felony for certain drug and property offenses, but is inapplicable to persons with prior conviction for serious or violent crime and registered sex offenders.

Proposition 45, which would require the state insurance commissioner’s approval before a health insurer can change its rates or anything else affecting the other charges associated with health insurance, faces an uphill battle to pass. Forty-six percent of likely voters oppose the initiative, while 36 percent support it.

Support has declined by wide margins since the September 2014 poll, when 61 percent of likely voters favored the proposition and 29 percent opposed it.

The ballot initiative would require that doctors be drug tested and also requires that a statewide prescription database be reviewed before certain controlled substances are prescribed to patients, and increases the cap for medical negligence lawsuits from $250,000 to account for inflation.

Voters are willing to pass propositions when they see significant problems that need resolution.

“They’re willing to take on the water bond because of the drought. They understand the issues that California has had with deficits and the budget problems over the past 15-plus years. Then recently, with prison overcrowding and the lawsuits that have resulted, they’re willing to take on some prison and sentencing reforms. This election is showing that voters are willing to pass ballot propositions when they see something rising to the level of a significant problem or crisis.”

Californians are slightly less inclined to want to halt the state’s high-speed rail project, according to the poll. When asked whether construction of California’s high-speed rail line should be allowed to go ahead or if it should be stopped, voters were nearly split. Forty-eight percent said the rail project should stop, while 44 percent said that it should proceed.

These results reflect a minor shift in sentiment from the September 2013 Poll, which showed that 52 percent of voters said the project should be stopped, as opposed to 43 percent who would want the project to go forward.

The poll, the largest statewide survey of registered voters, sampled 1,537 California voters from Oct. 22-29, 2014, and includes a significant oversample of Latino voters as well as one of the most robust cell phone samples in the state. The survey was conducted by Democratic polling firm Greenberg Quinlan Rosner Research and Republican polling firm American Viewpoint, and has a margin of error of +/- 2.9 percentage points.

Even when prompted about potential costs and government overreach, most Californians don’t want to overturn the ban.

Two strategists — one from each party — anticipate Election Day

USC Unruh fellows Matt Rodriguez and Mike Madrid look at the issues from both sides of the aisle.

USC study looks at impact of medical malpractice reforms on a national scale.