Peals of laughter echoed off the walls of Lenicia B. Weemes Elementary School’s auditorium near the University Park Campus as dozens of fifth-graders took delight in The Jester Has Lost His Jingle.

The children kicked off a three-week read-a-thon to benefit sick children — an event co-organized by the Joint Educational Project’s (JEP) USC ReadersPlus program.

The other organizer is the Jester & Pharley Phund for Reading Makes a Difference, a program sponsored by the USC Good Neighbors Campaign.

Weemes is among five schools in USC’s Family of Schools participating in the read-a-thon.

“When you’re feeling lonely, or sad, or bad or blue, remember where laughter’s hiding. … It’s hiding inside of YOU!” a woman read aloud, displaying the colorful pages of the book.

“It was a really touching story,” fifth-grader Erica Mozo said during the Oct. 23 event. “I loved the way she read the story and brought all the characters to life.”

The story behind the story

The reader was Barbara Saltzman, a former Los Angeles Times editor who shared how her son, David Saltzman, wrote and illustrated the story while battling cancer.

In 1990, David died of Hodgkin’s disease at age 22, shortly after graduating from Yale University. The book was his senior project. It tells the tale of a medieval court jester banished by the king when he can no longer make people laugh. Sent out into a hostile, humorless world, the jester hunts for laughter. He finds it in the most unlikely place — a hospital with a young girl who has cancer.

After spreading laughter throughout the kingdom, the jester returns to court with the revelation that laughter is hidden inside all of us. 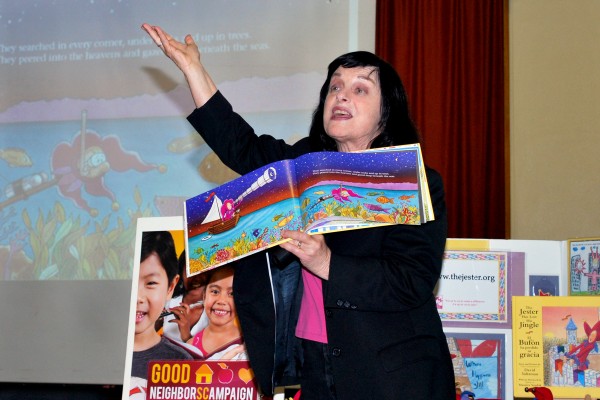 Joe and Barbara Saltzman mortgaged their home to publish the book in 1995. The Saltzmans are alumni of the USC Annenberg School for Communication and Journalism, and Joe is a professor at USC Annenberg.

As the book became a New York Times best-seller, the couple created the nonprofit Jester & Pharley Phund. Named for the book’s central characters, the charity aims to promote a love of reading and develop compassion among students in low-income schools. The Jester and Pharley Phund helps sick children by bringing them comfort and laughter through donations of Jester books and dolls.

As part of the Good Neighbors Campaign grant, Weemes chose to donate copies of Jester books and dolls to patients at Shriners Hospitals for Children — Los Angeles.

By using David’s story as inspiration, we are able to emphasize how important reading and charity are.

The grant also provided every Weemes classroom with a copy of the bilingual English/Spanish edition of Jester and three Jester enrichment manuals for teachers.

An inspiration to all

“By using David’s story as inspiration, we are able to emphasize how important reading and charity are,” Barbara Saltzman said.

ReadersPlus encourages and supports the children in reading as many pages as they can for the read-a-thon, she said.

Lessons from The Jester Curriculum Supplement are also introduced to students during after-school enrichment programs to integrate language arts, science and math.

“The broader life lesson is caring and sharing,” Koneazny said.

Donors have contributed more than $17.7 million to the campaign since 1994.