Skateboarding professionally since age 16, Amelia Brodka ’12 was invited to compete as an alternate in the 2010 X Games’ skateboarding competition for women.

Although the then-sophomore at the USC Dornsife College of Letters, Arts and Sciences didn’t participate that year, she was hoping to compete the following year. But it was too late. When the time came, the X Games announced it was cutting the women’s skating competition. There just weren’t enough women to compete, officials said.

“It got me thinking about how I could convey the message to a greater audience that women’s skateboarding was actually growing,” said Brodka, who earned her bachelor’s in narrative studies and communication.

As it turned out, her major in narrative studies helped Brodka send a powerful message. For her senior project, she made a feature-length documentary uncovering the thriving community of female skateboarders.

“I applied what I learned in narrative studies in terms of story structure and film, as well as what I was learning in communications about media representation and its effects on culture,” Brodka said.

Crossing a variety of cultures

“In narrative studies, we draw broadly upon storytelling across literary, cinematic and dramatic traditions from a variety of cultures,” Fliegel said. “We want to prepare students to tell stories for a globalized audience.”

The program, housed in the USC Dornsife Department of English, gives students the opportunity to study narrative across disciplines. They select courses from a broad range of subjects, including English, comparative literature, philosophy, theater, American studies and ethnicity, cinema, Slavic languages and literatures, and more. Students conclude their studies with a capstone project.

After all, storytelling is not just for writers, it’s an important component of many professions.

No matter where students find themselves, they will need a good sense of storytelling.

“No matter where students find themselves, whether it’s in the publishing industry, in the entertainment industry or in law, they will need a good sense of storytelling,” Fliegel said.

This is exactly what Brodka did.

In Underexposed: A Women’s Skateboarding Documentary, produced by fellow skater Brian Lynch, Brodka spoke with heavy hitters in skateboarding. They included the president of the International Skateboarding Federation, professional skaters, skateboarding magazine publishers and top marketers from skate brands like Toy Machine, Etnies and Skate One. 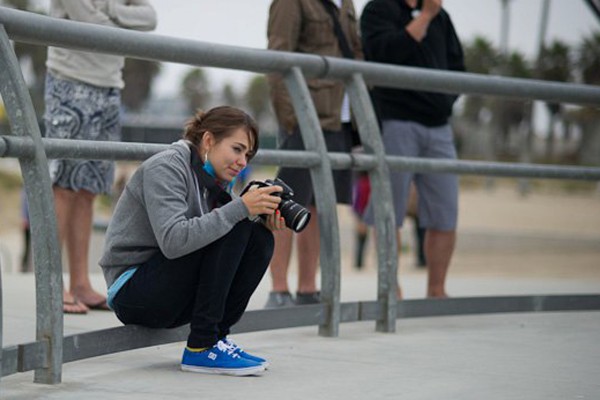 “As I was making the film, I was pleasantly surprised at how well-received I was,” Brodka said. “The people I reached out to were very supportive and really open to talking about the barriers that exist for women in skateboarding.”

“Most of the time, they have a model posing in their clothes or with their boards,” she said. “Rarely do you see a female professional skateboarder featured in an ad campaign.”

After graduation, Brodka screened Underexposed to audiences all over the world.

“It opened up a ton of doors for me to be able to continue to create platforms for women in skateboarding,” Brodka said.

This year, Brodka and her partner Lesli Cohen launched the nonprofit Exposure Skate, a program that empowers and educates women through skateboarding.

“Now, girls as young as 10 are launching ‘airs’ out of 14-foot half pipes,” Brodka said. “I had never seen that before in my entire skateboarding career. There’s just a flood of younger girls and women from all over the world truly progressing in the sport.”

Brodka said the skills she learned as a narrative studies major continue to apply to her life, whether she’s creating marketing collateral for Exposure, editing a short promotional video or even crafting an email.

“Storytelling applies to so many different areas of running a nonprofit,” Brodka added. “You have to think about how you frame the story behind your cause, event or brand in a way that will resonate with the specific audience you are trying to reach.”

She got her first board at the age of 12 after seeing X Games in Philadelphia, and she’s been hooked ever since. Skateboarding for Amelia Brodka ’12 is more than a hobby. It’s her life.

Two USC School of Cinematic Arts graduates will be honored at the 22nd Annual American Society of Cinematographers awards.

How to tell a skateboarding saga with a kickflip