Every afternoon, Merril Benes watches The Ellen DeGeneres Show. She loves Ellen’s silliness, her dancing. When Ellen introduces a guest, Leonardo DiCaprio, she laughs at their banter.

About 30 seconds later, Benes has no idea who Leonardo DiCaprio is.

She hasn’t spoken a complete sentence in nearly a year. Mostly, she just giggles.

Benes, a woman who used to be a multitasking Jedi for the president of a large corporation, can no longer remember how to dress herself. How to find the guest room in her 2,800-square-foot house. Even how to bathe.

She used to love books, especially romance novels by Danielle Steel. But if she read the opening sentences of Season of Passion, it might go something like this:

“The alarm went off just after six.

She stirred, reached an arm out from under the covers, and turned it off.

She could still pretend that she hadn’t heard it.”

By the time Benes has gotten to “she could still pretend,” she’s already forgotten about the alarm clock and the rather annoyed woman turning it off.

Although she can still remember what a car is and who her husband, Cary, is — both long embedded in her neural pathways — Benes cannot create new long-term memories. Diagnosed six years ago with Alzheimer’s at age 55, she has an estimated three to five years left to live. So she takes her Aricept and Namenda, participates in once-a-month clinical drug trials at USC’s Alzheimer Disease Research Center (ADRC), takes day trips with her six-day-a-week, live-in caregiver, Lorraine, and largely waits for the inevitable.

Short-term memory loss occurs every 30 seconds, as demonstrated in this video from the USC Viterbi School of Engineering:

Short-term memory resides in the brain for about 20 to 30 seconds. From there, it must be converted into the electrical-chemical language of long-term memory or it is lost and never retained. For Benes, her hippocampus — the part of the brain responsible for that long-term memory conversion — hasn’t properly done its job. Like a damaged circuit, the sequence of “talking” neurons gets no further.

Stepping into that breach is USC Viterbi Professor Ted Berger, who, like Inspector Morse in his favorite detective fiction, has been assembling the puzzle of the human brain for the past 25 years.

Berger, a neuroscientist and biomedical engineer, has an audacious plan to bypass the damaged brain circuitry in Alzheimer’s patients like Benes. A VSLI memory chip, or cognitive prosthetic, embedded under the skin at the crown of the skull, would essentially mimic the function of the Alzheimer’s ravaged hippocampus. MIT Technology Review named it one of the “top 10 breakthrough technologies” of 2013. 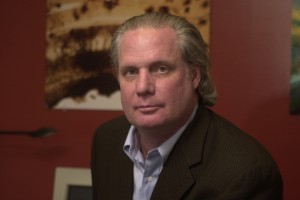 Ted Berger wants to create silicon chips that can speak to living brain tissue in the brain’s own electronic language. (USC Photo)

Imagine a scenario in which Benes is meeting her neurologist for the first time in six months:

Neurologist: “Hi, Merril, my name is Dr. Chui. I’ll be asking you a few questions.”

The sensory information from Benes’ eyes, ears, nose and fingertips all send electrical pulses up to the brain. They make their way into the entorhinal cortex, the doorstep of the hippocampus, and the place where Alzheimer’s often makes its initial beachhead. From here, the signals begin to consolidate in a region of the hippocampus known as CA3.

In a normally functioning brain, the neural code for Benes’ memory would pass through the curve of the hippocampus, beginning in the CA3 region as nearly coded long-term memory before exiting CA1 as final coded long-term memory. But today, because of either trauma or disease-related damage ahead, a detour is needed.

It is here in CA3 that neurons would be recorded by 32 ceramic electrodes and sent to a 6 millimeter-by-6 millimeter microchip. The chip, embedded with mathematical models created by USC Viterbi Research Associate Professor Dong Song and Professor Vasilis Marmarelis, would then mimic the hippocampus, translating the code into final long-term memory. Where are the consolidated memories stored from there? That part is still unknown. “That’s a Nobel Prize-winning question,” Berger said with a smile.

In this scenario, the next time Benes met with Chui, she should be able to retrieve the newly coded long-term memory of their previous meeting. Patients with Alzheimer’s, dementia and stroke would be able to create long-term memories that might lead to a more manageable life: remembering how to dress themselves, bathe, find the bathroom, identify caregivers and — if they’re especially lucky — even read novels by Danielle Steel.

Berger’s first memory is one of loss. He remembers being 2 years old, playing with a toy gas station in Lafayette, Indiana. There was a garage section to park the cars, an elevator to lift them to a second level, even a curved ramp where the cars could run down. His father, Arvid, an electrical engineering student at Purdue University, had just taken a job at IBM and the family was moving to New York’s Hudson Valley. “The toy got left behind,” Berger said. “There wasn’t enough room in the car.”

To be clear, the memory prosthetic he is working on would not be able to restore memories like this once lost.

“It won’t help you remember the name of your fourth-grade teacher if you’ve forgotten it,” Berger said with a laugh. But for someone like his mother, Marian, whose hippocampus was damaged by stroke and who died in 2005, it might have allowed her to, say, recognize her speech therapist upon entering the room.

Human trials a few years off

For now, human trials with the memory chip are still a couple years away, but Berger has already seen great success with rats and primates. In June 2011, for example, Berger, working with his colleague, Sam Deadwyler of Wake Forest University, proved they could literally turn memory on and off at the flip of a switch. Laboratory rats, taught to respond to a sequence of levers, had their memories blocked by a drug called MK801. Unlike Benes, the rats have a short-term memory of five to 10 seconds. But when the memory signal was turned on from a nearby computer, the animals remembered. In addition, the researchers demonstrated that in a normal, functioning hippocampus, the device could actually enhance the memory capability of rats.

The second huge moment came in September 2012, when Berger and Deadwyler successfully tested the brain implant in monkeys. A couple dozen rhesus monkeys playing a picture-matching game had their memories impaired by similar pharmacological agents. Their performance fell by 20 percent. But once the memory signal was activated, the monkeys did even better than normal.

The key in both cases was the ability to record and identify specific memories — i.e., what specific neurons, firing electrical pulses to each other at what specific intervals, create the code for “push this lever for water” or “this toy is the correct match.”

Once recorded and identified, Berger can essentially create “artificial memories” — based on the inputs, the neural code flowing in from the CA3 region, the microchip can predict what that output would have been (if the hippocampus had been functioning) and speak the language fluently enough to fool the rest of the brain.

The brain has its own language, and timing appears to be anything. For example, when Benes sees her doctor, there are probably 10,000 neurons in her brain assigned to the task of describing what he looks like.

The brain has its own language, and timing appears to be anything. For example, when Benes sees her doctor, there are probably 10,000 neurons in her brain assigned to the task of describing what he looks like. The individual neurons can’t do much — after all, we kill a couple thousand of them over a good martini lunch — but when they get together as a group, that’s when the action happens.

Neurons fire electrical pulses at each other called action potentials. These action potentials, or “spikes,” are a short explosion of electrical activity that last for milliseconds. But the information, the real memory information, is not carried in the pulses themselves, which are nearly identical. Just as Claude Debussy once said, “Music is the space between the notes.” Perhaps memory may be best described as the space between the pulses.

For a huge music fan like Berger, who saw the Who smash their guitars and amplifiers at 5 a.m. during Woodstock, there’s a certain poetry in that.

“The biggest success is understanding the approach to the problem,” he said. “More work will be required, but the path has been laid down. It’s been discovered. If we can predict CA1 outputs for a wide range of CA3 inputs, we have begun to learn the language of the brain underlying memory. Now we still don’t know exactly what all the content of the language is yet. But we can make pretty good predictions.”

For Merril Benes and others like her, even limited restoration of the ability to form long-term memories could yield dramatic effects. As her husband, Cary, said, Benes “hasn’t been alone for five minutes in two years. … She couldn’t dial 911 if she needed to. If she’s taking a shower, she can’t adjust the water or remember to go beyond just rubbing her left arm with a washcloth for five minutes.”

Without a functioning hippocampus, that stopwatch is ruthless. Roughly every 30 seconds, short-term memories come to die. And for Benes, even the previously ingrained long-term memories, the ones that predated Alzheimer’s, are beginning to fade rapidly.

Berger knew that the technology would come too late for his own mother, but he has high hopes that just like the cochlear implant and the artificial retina before him, this will be the next big breakthrough in prosthetics for the human brain. The only difference is that unlike a cochlear implant or artificial retina, which involve a one-way communication (sending light or vibration into the human brain), this involves a real dialogue. The brain chip would need to both receive short-term memory code and export it as long-term memory code for storage elsewhere in the brain.

“No one’s ever done this before,” Berger said. “When you look at the reality of it, it’s frightening. [But] when you look at all those neurons and all those action potentials streaming out for even the simplest memory, if the brain can do it, we should be able to do it. In the end, we’re only looking at ourselves.”

Memories are fleeting, but scientists see them as they happen

Nearly $10 million from the NIH enables researchers to study the brain as it forms memories.

Oscar Wilde called memory “the diary that we all carry about with us.” Now a team of scientists has developed a way to see where and how that diary is written.