Rodney Swan ’88, MA ’89 is most comfortable in jeans and a T-shirt. Not only did he grow up on a small family farm cultivating cotton near Blythe as a young man, he worked in the fields of several local farms.

After earning a bachelor’s and master’s degree in economics from the USC Dornsife College of Letters, Arts and Sciences, he donned a suit each day as the chief financial officer for Cigna Healthcare of California.

Despite his success, something was missing.

“Over the years, I came to feel like I wanted to do something more with my life,” Swan said. “So, nine years ago, I bought a farm.”

After a few years of changing from his business suit to his farmer’s jeans working both jobs, his investment paid off. He dipped into his life savings and worked hard until the farm was thriving. Then he focused on his farm business full time.

Now Swan is president of Swan Farms, which operates 4,000 acres of agricultural production plus another 3,000 acres of restoration land. The farms are located in Blythe, situated in Riverside County along the Colorado River, and his crops include alfalfa, cotton, wheat and corn.

As a farmer, Swan is concerned about water. As 2013 was the driest year in recorded history for many areas of California, Gov. Jerry Brown has declared a statewide drought emergency and is asking all Californians to reduce their water use by 20 percent.

On Oct. 8, Swan was a panelist at an event sponsored by the USC Dornsife Economics Leadership Council titled “Tapped Out: Opportunities and Challenges in the Absence of Water.” Panelists agreed that a shift is needed in how we think about — and share — water.

Panelists suggested that a price increase would encourage people to respect and understand the value of water. Currently, the cost per gallon of water from the Los Angeles Department of Water and Power is a half-cent.

Swan said the increasingly efficient use of water for agriculture is in demand in the current drought conditions. He believes adopting efficient irrigation systems will become relatively less expensive in the areas hardest hit by the drought. 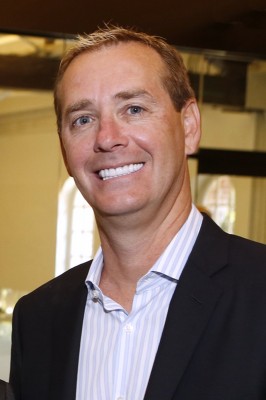 Swan is paid a set water price in exchange for putting aside portions of his land. (Photo/Steve Cohn)

The alumnus knows something about water management. He has contracts with the Metropolitan Water District of Southern California, which pays him a set water price in exchange for putting aside portions of his land that he will not farm or irrigate. The water he doesn’t use is routed westward.

Swan believes such contracts are great for both farmers and urbanites. Cities get what they need: water during lean years, namely the current drought. During wet years, the water gets stored in Lake Mead and other locations.

He advised that public and private policymakers and companies must work together to develop recycling methods and new technologies for water use, including the potential of desalinization.

“I look forward to five to 10 years from now because there are so many enhancements that can be made,” Swan said.

Swan became a member of the leadership council because he knows the value of an economics degree.

Without the economic lessons learned at USC Dornsife, he said, he couldn’t do his job.

No matter where you are or what situation you’re in, you always find yourself using these fundamental skills that you learned in the classroom.

“The basic economic tenet of supply and demand is, every single day, the basis of what I deal with,” he said. “Strategizing, planning and all the things I learned are fundamental. This is not only to what I do for my work, but to my sitting on charitable, corporate or government boards.

“No matter where you are or what situation you’re in, you always find yourself using these fundamental skills that you learned in the classroom, without realizing you were learning them at the time.”

As a junior in high school, Swan entered USC Dornsife through a Resident Honors Program scholarship. Carole Snow, an administrative director at USC Dornsife who ran the program, became an important mentor to him. Not sure what he wanted to study, Swan took an economics class his first semester. It clicked.

In his sophomore year, he enrolled in the progressive master’s degree program in economics, allowing him to take graduate-level classes and earn a bachelor’s and master’s degree in four-and-a-half years. He also earned a second bachelor’s in business administration from the USC Marshall School of Business.

“Both programs I participated in were spectacular,” he said. “I literally went from chopping cotton out in the fields to USC. To go from that to eventually sitting in board rooms — I could not have done that without my experience at USC Dornsife.”

In latest poll, Californians say drought is a crisis that has little effect on daily lives

Voter support for a new water transportation system is washed away by the cost of proposed improvements, according to the results of the latest USC Dornsife/LA Times Poll.