When Thomas Williams ’08 was 12 years old, his mother attended his sixth-grade parent-teacher conference. There, Williams’ teacher told her that by the time her son was 16, he would be a gang leader, a drug dealer or dead. “You might as well give up on him,” the teacher said.

By his own admission, Williams was a troubled child who frequently misbehaved at school. But that evening, when he saw the tears welling up in his mother’s eyes as she told him the educator’s prediction, he vowed he would prove his teacher wrong and make his mother proud.

Seventeen years later, the USC alumnus who earned a bachelor’s in sociology can rest assured he achieved those goals.

A former USC Trojans linebacker who helped win two national championships and four Rose Bowls, Williams was drafted by the Jacksonville Jaguars in 2008. He had played for several teams when a neck injury ended his professional football career in 2011. Williams turned what could have been a devastating setback into a victory, transforming his struggle and determination into success. His new career as a motivational speaker and author has blossomed.

His recently published autobiography Permission to Dream (Thomas R. Williams Inc., 2014) traces his path to success and the obstacles he overcame to get there.

Searching for his identity

Born on a military base in Kansas, Williams grew up with his mother and grandparents in Vacaville, a small town in Northern California. He had moved there with his mother at age 5 following his parents’ divorce. Williams’ mother and grandparents were loving and kind and did the best they could for the boy, but Williams missed his father and was often in trouble at school.

“I think it was because of my search for my identity. Being biracial in a predominately white community, you not only see you’re different, you feel different, too,” said Williams, who noted that as a kid he loved to roughhouse and wrestle.

Although he had developed an early passion for baseball, football was Williams’ salvation. He started playing at age 14 when he was recruited by Vacaville High School football coach Ed Santopadre.

“I was always a physical kid, but I wasn’t encouraged to be physical until I started playing football,” he said. “You mean to tell me I can run as fast as I want, jump as high as I want, hit as hard as I want and scream as loud as I want? It felt like a release and gave me a sense of purpose. I just hadn’t found the proper outlet until then.”

“I remember the day I got called out of class by our football coach,” Williams said. “I thought I was in trouble, but I got to the coach’s office and saw a recruiting scout for Louisiana State University. He had come all that way just to see me play and tell me that I had the potential to play at the next level.”

Soon Williams was inundated with visits from recruiters and offers from universities. One, however, stood out.

There was something about the way USC wrote me a letter to offer me a scholarship that stuck out to me above everyone else.

“There was something about the way USC wrote me a letter to offer me a scholarship that stuck out to me above everyone else,” he said. “It was the simple fact that USC said they were going to call me on a specific day at a specific time, and they were true to their word.”

Of his successful career with the Trojans, what Williams remembers most is the relationships.

“Coming in with 23 freshmen and graduating with those same guys and over the years, you grow up and learn how to be a man, how to be accountable and to work with others.”

The two greatest days in his life occurred in 2008, the year he graduated from the USC Dornsife College of Letters, Arts and Sciences — the first member of his family to earn a college degree — and was drafted by the NFL to play with the Jaguars. 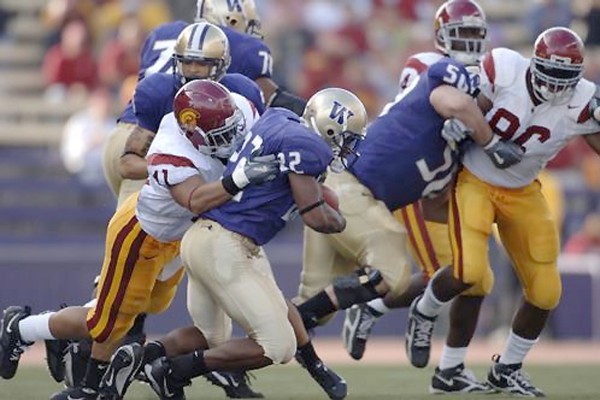 Williams, left, excelled as a linebacker at USC. (Photo/courtesy of Thomas Williams)

“When I got the phone call that I’d been drafted, I just hugged my mom and said, ‘We made it.’ It was an unbelievable high.”

He went on to play with the Seattle Seahawks, New England Patriots, Buffalo Bills and Carolina Panthers.

Then, in October 2011, during a game against the Minnesota Vikings, Williams’ life changed forever when a teammate collided with him.

“Our heads hit, and it sent shock waves through my entire body. I remember lying on the field and not being able to move. As I lay there, I remember thinking, ‘If my mom was watching, what would she think?’ I was afraid.”

Although Williams was eventually able to walk off the field and did not require long-term hospitalization, his neck injury spelled the end of his football career at the age of 27.

Flying back to Los Angeles with the heavy understanding that his career was over, Williams wrote this question on a piece of paper: “If I could do anything in the world, what would it be?”

His answer? “I want to inspire the entire world to feel what I felt on draft day.

“It was that sense of accomplishment, a sense of ‘I did it, and you can do it too,’ and I wanted to share that with the world.”

Now, through his company Thomas R. Williams Inc., he is doing just that via his book and national and international speaking engagements.

He’s worked with the U.S. military as well as corporations as a speaker. In July, Williams taught a student-athlete transitional program at USC, proactively preparing student athletes for life after sports. He hopes to offer similar classes during the spring semester.

“The only reason I’m a successful businessman today is because I invested in that time at USC Dornsife and others invested in me. Now I pull from those valuable experiences and apply them to my life,” Williams said.

“Every single day I live by the Maya Angelou quote, ‘When you learn, teach, when you get, give.’ My goal is to share my story and encourage and inspire others so they can do the same.”

After the touchdowns, before the field goals and somewhere between the kickoff and the final gun, USC football fans are learning about the university and some of its world-class accomplishments.

During a recent discussion held at the USC School of Policy, Planning, and Development, Rep. Linda Sanchez (D-Calif.) shared personal lessons and political insights from her book Dream in Color: How the Sanchez Sisters Are Making History in Congress (Grand Central Publishing, 2008).

USC will celebrate the 125th anniversary of its athletic program during the upcoming 2013-14 season.