Justin Arana was traveling the world on a spiritual quest to find himself. The journey was spurred by his grandfather, who had asked him if he would be happy with the worth of his life if he died the next day.

It was 2008, three years after Arana had earned his bachelor’s degree in international relations at the USC Dornsife College of Letters, Arts and Sciences.

While visiting the surfing village of Morrungulo, Mozambique, on the southwest coast of Africa, he took a walk that altered the course of his travels — and life.

It was a long walk. He was accompanying a local family to collect drinking water. After an hour and a half, the group arrived with their containers. Arana immediately noticed the dirty, shallow pools of water. Nearby, cows had defecated. This was the family’s water source.

“The experience was a stark eye-opener,” Arana said. “I was really confronted with the lack of access to clean water.”

All the while, Arana was filming his experiences to share with friends and family back home in Los Angeles. That footage would evolve into Arana’s documentary, My Name Is Water. 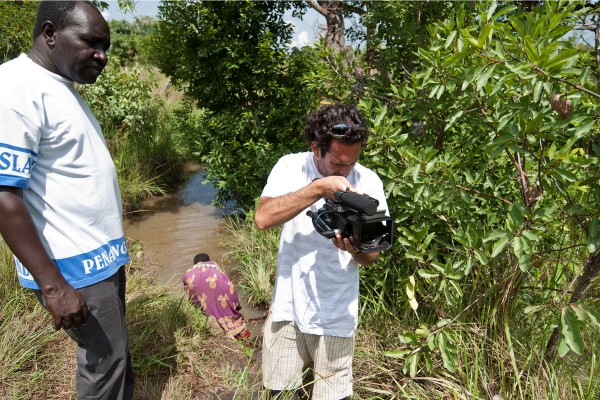 Arana films women in Mozambique on their journey to retrieve water. (Photo/Courtesy of Justin Arana)

Produced by Sharon Stone, the film about Arana’s efforts to bring clean water to Morrungulo and Mozambique premiered Oct. 16 at the Hollywood Film Festival.

Back in Morrungulo, a day after witnessing the water condition, Arana passed by the local hospital. Long lines of women and children waited patiently to be examined. He asked one of the nurses about everyone’s treatment.

“She said most all of the patients had water-borne diseases,” Arana said. “There were a handful of cases of AIDS and malaria, but that cholera and other diseases were the most prevalent. They couldn’t keep any supply of medicine in the hospital because people just keep coming in with ailments from unclean water.”

At that point in his life, Arana was already an experienced traveler. During his senior year in college, he had volunteered as a medical aid worker in the Darfur region of Sudan during the height of the genocide.

Following that, he worked with divestment campaigns related to the ongoing genocide. Now it appeared he had another opportunity to make a difference.

That evening, he sent an email to his former colleagues from his work with Darfur initiatives. He described the situation in Mozambique and posed a solution: The village needed a water well. He would oversee the installation and management if funds could be provided.

For about $6,000, infrastructure could be built so that Morrungulo residents could tap into fresh water in aquifers below ground, he said. Children who previously stayed home from school to help their mothers collect water on twice daily, three-hour round-trip journeys could be back in class learning. Diseases could be prevented.

“Water is a human necessity,” Arana said. “If you’re getting unclean water, it affects every single part of life.”

The next morning, Arana received an email. A donor came through with the funds.  As a result of the new well, which was placed in the local school so that all families could easily access it, attendance at the school doubled. Arana set up an oversight committee to ensure that water would be equally distributed and the well would be maintained.

“There’s a shocking statistic of how many wells end up failing in sub-Saharan Africa because of a lack of maintenance,” Arana said. “So many things can go wrong from a gasket breaking or pipes corroding. We didn’t want to put a well in and then have it break down and be no good to anybody.”

Involving the community in the well’s upkeep also established self-reliance and dignity in the community, Arana noted. Six years later, the well in Morrungulo continues to thrive. 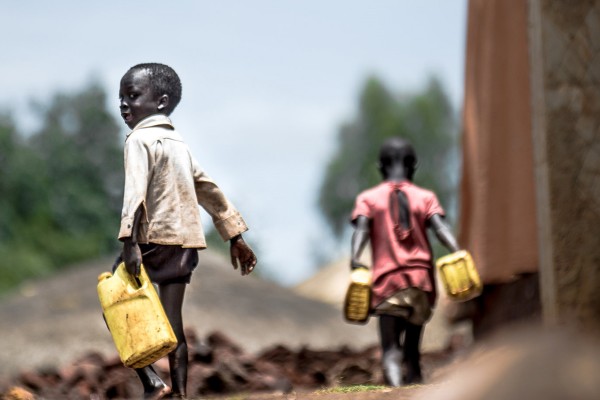 “These are all lessons that I had learned during my time at USC,” said Arana, who credits his international relations courses in “International Organizations” and the “Politics of Global Environment” with building a solid foundation for his work in Mozambique.

His efforts and expertise were noticed by Stone, whose philanthropy is related to AIDS research in developing countries.

Since 1995, Stone has worked with the AIDS research organization amfAR. The group had made strides in helping HIV-positive women deliver healthy babies. In many countries, mothers cannot nurse their babies without transmitting the infection. They must use formula, which is often mixed with unclean water. Stone wanted to educate herself about preventing water-borne illnesses in these babies.

An inspiration to others?

Arana was asked to accompany Stone on a tour of cities in Northern Uganda and South Africa to learn more about the issue. During the trip, Stone learned about Arana’s work in Mozambique and encouraged him to turn his footage into a documentary. The result became My Name Is Water. Arana hopes the film will inspire others to take action to seek positive change.

“We have the power to make a difference,” Arana said. “It’s not something that’s dependent on major organizations. We have the capacity to touch people’s lives in a very powerful way. Water is a wonderful example of that. When you bring clean water to a community, you see results right away.”

Arana continues to bring wells with clean water to other communities in Mozambique and other parts of Africa with Water Underground, a nonprofit he founded.

Although Arana’s grandfather died before seeing his grandson’s contributions, Arana is at peace knowing the answer he would give to his grandfather’s question would now be “Yes.”

A scientist’s defense of water worship

In small, remote villages in the mountains of Afghanistan, people benefit each day from the entrepreneurial drive of MBA students at the USC Marshall School of Business.

Bacteria that purify water rather than pollute water

Jean-Pierre Bardet, chair of the Sonny Astani Department of Civil and Environmental Engineering in the USC Viterbi School of Engineering, was in Washington, D.C., from March 23-25 meeting with legislators about their support on bills for water infrastructure and dam rehabilitation and repair.

A plan to secure clean water in Africa turns out well