In the not-too-distant future, wired humans will blur the boundary between the real and virtual worlds. So say USC researchers who gathered in New York City on Oct. 15 to share their visions for the digital age as part of “Defining Future Reality,” USC’s 2014 Global Conversation event.

The Global Conversation featured presentations on the changing experience of reality and the digital future of medicine, along with demonstrations by USC’s renowned immersive reality incubator, the Institute for Creative Technologies.

“USC’s long-standing reputation as an engaged institution accessible for scholars around the world includes our commitment to opening and nurturing robust conversations with alumni, friends and supporters,” Garrett told nearly 300 alumni, journalists and friends of USC.

“The future is not some place we are going to, but one we are creating,” she said, pointing to the university’s 10-year, $1 billion Digital USC initiative, which inspired the theme of the New York showcase. The initiative brings together all schools at USC to harness the power of digital knowledge and informatics.

The digital future of health care

We’ll constantly be streaming wireless information about how our bodies are doing.

“We’ll constantly be streaming wireless information about how our bodies are doing,” she said.

That will mean patients will get attention before health concerns become crises. According to a study by Saxon and colleagues, for example, patients with implantable defibrillators live three times longer when they are monitored wirelessly at least once a day. 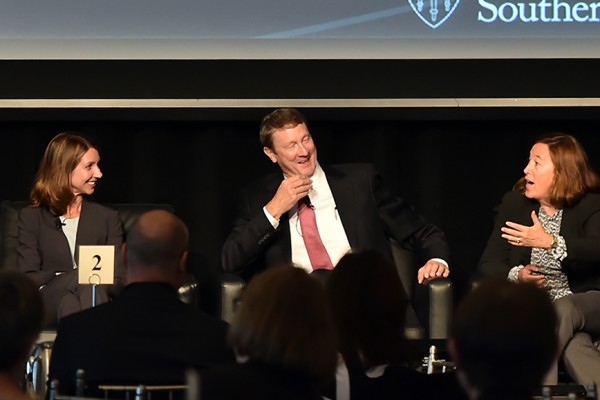 Biomedical imaging leader Scott Fraser demonstrated the power of real-time digital imaging of tiny blood vessels, an approach shown to detect eye disease in its earliest stages without invasive injections of fluorescent dye. And neuroscientist Arthur Toga, another world leader in digital imaging and analysis, showed how scientists are coming closer to predicting degenerative diseases such as Alzheimer’s through powerful techniques for analyzing millions of brain scans.

Imaging also reveals the impact of drug treatment at the cellular level. Toga and his team were the first to show that the schizophrenia drug olanzapine reduces brain tissue loss from the disease.

Julie Zissimopoulos, an expert on access to health care at the USC Leonard D. Schaeffer Center for Health Policy and Economics, welcomes breakthroughs in digital diagnosis and prediction. However, such advances would best improve quality of life and lower medical costs if they focused on delaying the rate of aging rather than on treating specific diseases, she said.

If slower overall aging delayed the average onset of Alzheimer’s by five years, the number of people with the disease would drop by 41 percent, Zissimopoulos said.

The Apple of higher ed

Reflecting on his career in a conversation with Erica Muhl, dean of the USC Roski School of Art and Design, Jimmy Iovine held up Apple as a rare company that understands both technology and culture.

“If it’s a tech company, it needs someone senior in there who has something to say, who has a feel for pop culture,” he said.

Iovine said he’d like the Iovine and Young Academy he co-founded at USC to become known as the Apple of higher education, a home for innovators fluent in technology and the arts, and for a radically new model of instruction that erases disciplinary boundaries.

“Education is really ground zero for fixing anything. Right now there are a lot of kids bored in school.”

An immersion course in reality

Hao Li, an expert in 3-D digitization who was named one of the world’s top innovators under 35 by MIT Technology Review, predicted 2014 would become “the year of immersive experiences.” He demonstrated methods for rapid and affordable creation of 3-D bodies, faces and objects to satisfy the exploding demand for virtual reality content.

“Right now we have a chance to give machines a really good understanding of space and motion,” he said. 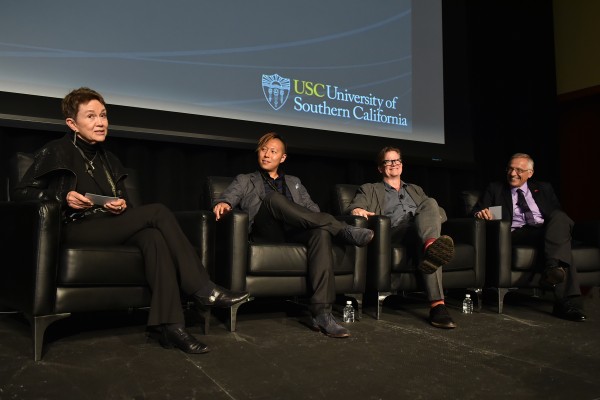 USC visionaries see a future in which virtual reality and the real world blend. (Photo/Dana Maxson)

Production designer Alex McDowell, who led the development of storytelling through the building of virtual worlds in the movie Minority Report and other projects, showed how virtual world-building has guided development in the real world, as in the case of a sustainable planned community in the Saudi Arabian desert. Retaining walls that could prevent flash floods and preserve groundwater were a fictional part of his virtual world, but now they’re part of a real Saudi project.

“We’re looking 10 years out at a future that does not yet exist but can be imagined,” he said.

Audience members also tried out immersive and virtual reality technologies developed at the Institute for Creative Technologies, such as the open-source virtual reality viewer that influenced Oculus Rift, an exposure therapy system for treating post-traumatic stress, and a rapid generator of any user’s avatar for insertion into video games. Innovations from the institute to enter the mainstream include realistic digital rendering of humans and immersive treatment of psychological conditions.

Forget Big Brother – it’s Big Business that may be watching you. The annual study of the impact of the Internet on Americans conducted by USC Annenberg’s Center for the Digital Future found that almost half of Internet users age 16 and older are worried about companies monitoring their actions on the Internet.

Live from New York: Your digital future according to USC