Three top USC scientists — Don Arnold, Scott Fraser and Carl Kesselman — will receive a National Institutes of Health Transformative Research Award to map the neurons in the living brain of a zebrafish, allowing the trio to study pattern changes as the animal forms new memories.

Transformative Research Awards are used by the NIH to fund high-risk/high-reward research — supporting “bold, paradigm-shifting, but untested ideas,” according to the agency. The competition for this award is intense, with only eight proposals funded across all of the NIH. 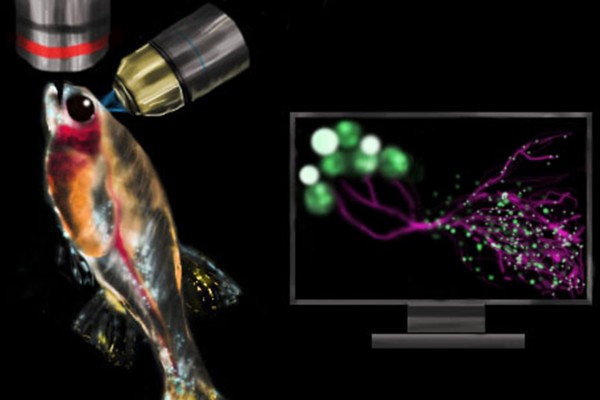 A five-year NIH award will allow researchers to explore how the brain stores information. (Image/Yasmin Davis)

The five-year, $9.7 million award will allow researchers to explore how the brain stores information. The experiments will use probes developed by the Arnold lab, in collaboration with Richard Roberts — who has joint appointments with the USC Dornsife College of Letters, Arts and Sciences and the USC Viterbi School of Engineering —  to light up synapses in living animals.

We want to be the first to actually see the changes in synapses that happen when a memory is made.

“Since 1894, scientists have suspected that memories are stored in the pattern of synaptic connections,” said Arnold, a USC Dornsife professor. “We want to be the first to actually see the changes in synapses that happen when a memory is made.”

Embarking on an exciting project

In order to see these memory traces, the team will put the probes into zebrafish, animals with perfectly transparent brains. They will image the fish using a light-sheet microscope that was designed and built in the Fraser lab by Thai Truong. The microscope will allow millions of synapses to be imaged within minutes.

“It is exciting to embark on a project to image an animal’s entire synaptome over time — an amazing convergence of improvements in molecular labels, in the speed and resolution of microscopes and the power of current computers. This team is redefining what is possible,” said Fraser, who has joint appointments at USC Dornsife, the USC Viterbi School of Engineering and the Keck School of Medicine of USC.

Finally, using algorithms and tools created by Kesselman, the team will turn the images into a huge database that it can access and explore.

“The end goal of this project is to create a new, high-throughput measurement technique that can be used to solve a broad range of unanswered questions in neuroscience. This project is truly unique in that we are looking at the critical data analysis and data management issues from the very beginning, with the goal that we can have the rate of scientific discovery track our rate of generating data,” said Kessleman, a professor of industrial and systems engineering at USC Viterbi.

The unprecedented detail of brain structure and function — in vivo, as it changes and grows — should offer insights into how synapses change during learning, how they’re affected by sleep, drugs and other stimuli, and more.

The research is an example of the convergence of research at USC, with scientists and engineers collaborating to generate the tools and techniques that push the boundaries of human knowledge forward.

Nearly 15 years in the making, a new book offers an encyclopedic inventory of the human nervous system.

The USC Neurorestoration Center brings together top minds in neurology, neurosurgery and bioengineering.

Memories are fleeting, but scientists see them as they happen