These social work students had no idea what they were in for.

“We weren’t given any details,” said Lindsey Etheridge. “From the invitation, it had an air of exclusivity to it. So I felt privileged and accepted immediately, but I really didn’t know what to expect.”

No one knew what to expect. But 15 USC Master of Social Work students, of which Etheridge was one, gave up their last free weekend of the summer to participate in two days of critical thinking designed to change the way students — and social workers — think about their roles in society.

An experiment of sorts, this social innovation laboratory was part of a new initiative at the USC School of Social Work to think in bigger, more creative terms and to turn theory into real-world practice.

To start, the school has established an Innovators in Residence program, the first of its kind at a school of social work. The school is opening its doors to outside expertise in diverse fields, such as art and engineering, to better prepare its students and faculty to influence the evolution of such an essential field as social work.

The Innovators in Residence program permits us to have sustained interaction over an entire academic year.

“The Innovators in Residence program permits us to have sustained interaction over an entire academic year with new approaches to problem solving and strategies for imagining fresh solutions to profound problems,” said Marilyn L. Flynn, dean of the USC School of Social Work. “We are unique in adopting this approach, not only in social work but in comparison to many other professional communities.”

This new program is another example of the groundbreaking work the school has undertaken under Flynn’s leadership. The school established a military social work program, the first of its kind at a civilian research institution, and obtained the first Congressional-directed appropriations ever received by a school of social work to create the Center for Innovation and Research on Veterans and Military Families. The school also launched an online MSW degree program, the MSW@USC, which has allowed it to become the first national school of social work.

The school’s inaugural innovator in residence is GreenHouse, an organization dedicated to social good that holds a portfolio of ambitious projects, including reprioritizing museum assets to be more effective in encouraging visitors to join the fight against genocide and creating a sustainable law firm business model with the good of society as its core focus.

We are … developing new models of social change to better people’s lives.

“We are a group trying to save the world by developing new models of social change to better people’s lives,” said Jeff Leitner, one of GreenHouse’s founders. “What’s troubling and frustrating is that culturally we are tilted toward financial interests and away from social interests. We want to counterbalance that.”

Leitner, who comes from a public affairs background, sees the field of social work as one that has unlimited potential to inform myriad and diverse areas of society.

“Social workers are unique. Unlike sociologists, anthropologists and political scientists, they aren’t satisfied with simply understanding what’s happening; they are mandated to fix things,” he said. “Unlike psychologists, they intervene at scale. Social workers are about social context, and in the relentless onslaught of economics and financial news, social context is what’s missing.”

And because the USC School of Social Work is the largest school of social work, due to its virtual presence via its online degree program, Leitner believes the school has an obligation to lead in the field by producing professionals who are equipped to imagine, design and build the next generation of social service agencies and institutions.

To that end, GreenHouse is assisting the school in building the infrastructure to accelerate the time it takes for research to become practice.

“We need to get what social work does well and get it into the market a lot faster,” he said.

That’s why GreenHouse devised the student workshop at USC. 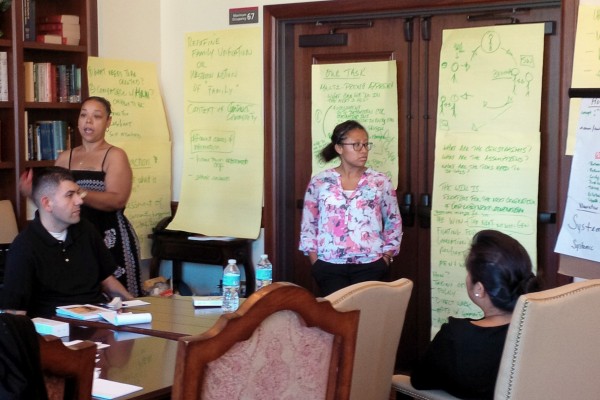 Clinical Associate Professor Annalisa Enrile had previously participated in a similarly convened social innovation lab held by GreenHouse’s founders and found the experience so helpful to her own way of thinking that she urged them to hold one of these meetings for the school’s students.

So a carefully selected group of Community Organization, Planning and Administration concentration students came to campus from all over Southern California, including those from the school’s Orange County, San Diego and Virtual academic centers. Those in the online master’s degree program were even in the midst of finals.

On the first day, GreenHouse introduced the idea of a “social supercomputer,” which the founders described as a kind of methodology that enables groups to produce innovative and imaginative ideas to solve the most intractable social challenges.

At first, the students were unsure.

“There was anxiety, figuring out what the expectations were, or if we were even smart enough to be there,” said Etheridge, a student at the Orange County Academic Center.

But that uneasy feeling quickly dissolved as it became clear that there were no “right” and “wrong” answers, that the process of coming up with solutions was more important.

We tried to get students to think from a perspective of systems and the big picture.

“We tried to get students to think from a perspective of systems and the big picture, another aspect of the strengths-based perspective. This is about overall social good, not just one community, one issue or one client,” Enrile said. “This kind of process makes students not reach for the same can of answers and same brand of brainstorming. It forces students to think creatively and to think through to the end of an idea, to really develop an idea. This would include taking in other perspectives like, ‘How would a journalist or an engineer or an artist see this issue?’ As we become more interdisciplinary, we have to be able to understand other perspectives and how to work through and with those perspectives. The earlier students can make those connections, the better practitioners they’ll be.”

By the end of the first day, Etheridge said she was ready to take on whatever might be thrown at her.

“We were told that we would have a real client the next day, to be on your game,” she said. “As students, you’re always in the position of having less power, but being told this was empowering.”

That client was Human Rights Watch, an international organization that strives to advance the cause of human rights for all, which presented the timely problem of unaccompanied minor children crossing the southern border into the United States.

“Social work might normally look at this as just an immigration issue. But, because of the discussions we had the day before, students identified it as a cycle of migration issue,” Enrile said. “This gives it a global perspective.”

Etheridge said that the way this conversation progressed, to a point where students felt comfortable enough to throw out any and all ideas, was liberating.

“There was a lot of wheat and a lot of chaff, but separating through that as a group allowed us to come up with things that were better than if we had done it individually,” she said. “I didn’t know anyone before that first day, and by the end of the weekend, we were this cohesive unit with one mind.”

Some of the big ideas that came out of this roundtable with Human Rights Watch revolved around a transnational approach, as the students realized that the governmental institutions that social workers typically work with could never properly serve a migratory population, especially not one that is so young. To remedy this, the students came up with ideas for transnational institutions, schools, partnerships and even field placements, where social workers could best serve these ever-changing populations.

We’re the next wave of social workers, and we’re the ones who are going to be expected to come up with solutions to big problems. I feel more prepared for that now.

By approaching large-scale societal issues with a new perspective, one that enables social workers to think in bigger terms to advance conversations often dominated by other professionals, Etheridge said she now feels as if she could do anything.

“I feel like it’s up to me — it’s up to us. We’re the next wave of social workers, and we’re the ones who are going to be expected to come up with solutions to big problems. I feel more prepared for that now,” she said. “Approaching a problem where there isn’t a solution is off the table. This experience fundamentally changed my capacity to come up with creative solutions. And you don’t have to do it the old way or toe any line. You have the power to come up with something new.

“It’s the most amazing thing I’ve ever been a part of.”

If you’re a bank serving a community that may not be the most savvy when it comes to finances, what do you do to encourage people to use your services?

The play Therapy shows how the line between professional and personal issues can become blurry.

Book promotes social work as a driver in translational research

A new book authored by USC School of Social Work professors Lawrence Palinkas and Haluk Soydan aims to outline the creation and evaluation of high-quality evidence on social work interventions.