The USC School of Cinematic Arts, which recently became home to a collection of Dennis Hopper’s photographs and memorabilia, honored the actor, director and photographer with a reception that marked the public opening of Part of Being an Artist: The Dennis Hopper Collection, Selected Works and Ephemera.

The reception for the new exhibition was followed by a screening of Apocalypse Now, which featured one of Hopper’s most memorable performances.

“His work is enduringly popular; a style of filmmaking that he pioneered with Easy Rider has inspired generations of students and filmmakers and certainly many of the students at SCA today,” Daley said. “In many ways, that style is as popular today as it was in 1969. And, of course, Hopper is a favorite of film historians and scholars everywhere.”

Marin Hopper said her father would be pleased with the exhibition and the attention his work was receiving.

“This is such a wonderful night and such a big honor,” she said. “I know my father would be so proud to be a part of tonight and to be celebrated as an actor, director and also the artist and photographer that he was so proud of being.” 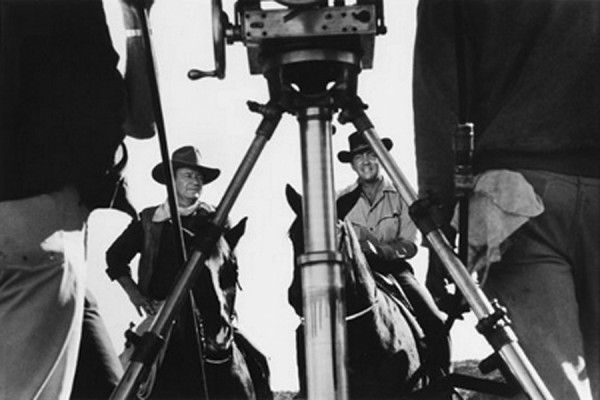 John Wayne, left, and Dean Martin on the set of The Sons of Katie Elder (Photo/Dennis Hopper)

Glen Mazzara, the writer and showrunner of the Starz show Crash, spoke about working with Hopper on the 2008 drama.

“He taught me a lot about how to be an artist, how to take chances. He was just fantastic,” Mazzara said. “No matter how hard it was for him to do some of the scenes — it was very dense dialogue, and we had a scene where he had to run around in the desert in a bathrobe and slippers — and he never complained once. This was the game. This was the art, and he was totally up for it.”

The exhibition will be on view and open to the public through Nov. 14 in the SCA Gallery at the Steven Spielberg Building. (Hours are 3-7 p.m. Monday through Friday.) It features Hopper’s black-and-white photographs featuring people (actor Paul Newman and artists Andy Warhol and Jasper Johns) — and events (Civil Rights Movement).

At the USC School of Cinematic Arts, the end of the school year means late nights studying, long days editing and student work presented as part of the annual First Look Festival.

The conceptual ideas that students at the USC School of Architecture have been developing in their minds over the last semester is coming to life in a massive display of science, art and innovation.