The USC School of Dramatic Arts raises the curtain tonight on the 2014-15 season, with more than 20 productions to be presented on stage over the next eight months.

From the poetic Pulitzer Prize winner Anna in the Tropics to the high-octane 1950s musical Grease to William Shakespeare’s timeless As You Like It, this season’s ambitious schedule includes a list of award-winning plays, a three-play repertory featuring the school’s graduate actors, new works by student playwrights and more.

“This diverse range of plays embodies an integral part of our curriculum, which provides our student artists a learning experience that is both challenging and thought-provoking,” said Dean Madeline Puzo.

Each year, the school fully mounts more than 20 productions that demonstrate the talents of the dramatic art students through their work as actors, designers, stage managers and technical directors.

This season’s productions include:

On the eve of his late wife’s birthday, a young widower remains a captive of his grief and spends his evenings with her ghost. In this tale of love and loss, the once-dynamic college professor is forced to make a choice: Rejoin the world of the living or lose all that is most precious to him.

Sarah Kane’s drama follows the journey of a woman in the throes of a psychological ordeal.

A mythical tale of witches and ill-fated love in the Great Smoky Mountains. Infused with folk songs, the story interweaves romance, superstition and betrayal.

A high school overachiever suddenly dies, exposing a secret that could destroy those left behind.

An unpolished young stranger comes to town in Inge’s revision of his Pulitzer Prize-winning Picnic.

Treacherous lovers, wealthy heiresses and a Spanish general are tossed together in a whirlwind of greed, lies and love. The high-spirited comedy is considered one of the best ever written by the king of French farce.

This Pulitzer Prize-winning play captures 1929 Florida, where cigars were still rolled by hand and “lectors” were employed to educate and entertain the workers.

Miller’s saga, set during the early years of the Great Depression, is the study of a tortured time in American history and of the indomitable spirit of the people who survived in the face of adversity.

Hailed as one of Chekhov’s master works, the drama unfolds in the Russian countryside, where a discontented group of artists are intertwined in unrequited affection and longing. This production is part of the USC School of Dramatic Arts’ annual Master of Fine Arts in Acting Spring Repertory.

Trickster Truffaldino signs on to serve two masters in the hope of double wages (and double meals) in this madcap farce. This production is part of the USC School of Dramatic Arts’ annual Master of Fine Arts in Acting Spring Repertory.

Set in present-day Mexico, the play is Associate Professor Oliver Mayer’s new adaptation of Lorca’s tale of murder and revenge. This production is part of the USC School of Dramatic Arts’ annual Master of Fine Arts in Acting Spring Repertory.

In 14th-century France, at the height of the Great Plague, a priest assembles a ragtag band of performers to spread joy in the midst of the devastation.

As You Like It
By William Shakespeare
Bing Theatre
March 5-8, 2015

All the world’s a stage in the Forest of Arden where lovers become entangled in a beguiling game of love, lust and mistaken identity.

The Way of the World
By William Congreve
Directed by John DeMita
Scene Dock Theatre
April 2-5, 2015

Mirabell wants to marry Millamant, but to keep her fortune intact he must outwit her relatives who are bent on keeping them apart in this comedy of intrigue and infidelity.

The school’s annual spring musical takes theatergoers back to Rydell High, circa 1959, for show-stopping numbers from the T-Birds and Pink Ladies.

Loomer’s dark comedy about the timeless quest for beauty focuses on three women from different centuries who meet in a doctor’s waiting room. 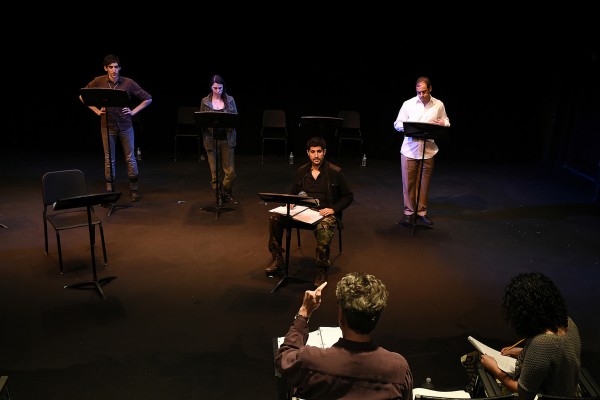 A play spotlighting the talents of sophomores in the Bachelor of Fine Arts.

A 17-year-old girl’s world turns upside down when her father moves the family to Brooklyn in the late 1950s.

New Works Festival Year 3
The Carrie Hamilton Theatre at The Pasadena Playhouse
May 26-30, 2015

A festival of plays assembled by the graduating playwrights of the MFA Dramatic Writing program. The readings, each of which has two public performances, are presented concert-style with professional actors and directors.

For more information about the 2014-15 season, visit the USC School of Dramatic Arts’ website.

When Xin Yi Bao ’12 Skyped her mother in China at the end of May to tell her she had been awarded a Jack Kent Cooke Graduate Arts Award, her mother was so excited she couldn’t sleep for an entire night.