What happens when a USC cinema grad with a fascination for science meets a USC virus expert with a sense of drama? A hit TV show about a global pandemic with plenty of scientific cred.

The Last Ship — one of summer’s big hits and recently renewed by TNT for a second season — was created by Steven Kane MA ’95 and his writing partner and co-executive producer Hank Steinberg.

Kane, who graduated from the USC School of Cinematic Arts, has gone on to success as a writer-producer with such TV drama credits as The Closer, Major Crimes, Alias and Without a Trace, along with the comedies American Dad and Curb Your Enthusiasm.

Paula Cannon, associate professor of microbiology at the Keck School of Medicine of USC, leads a research team that studies gene therapy, stem cells and hemorrhagic viruses like Lassa fever. She’s even been funded by the U.S. military to analyze the threat of viruses as potential bioterrorism agents. 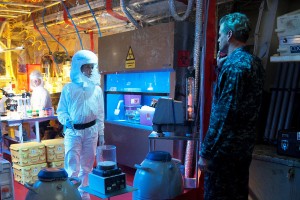 Five years after Kane left USC, he returned to create nearly 40 videos for various schools, centers and programs from 2000 to 2005.

“Doing videos about USC engineers, cancer doctors and biologists, I met a lot of fascinating thinkers who see the world in unique and interesting ways,” he said. “That helped me as a writer and gave me some really cool ideas for stories.”

She’s exactly what he wanted

In his latest creation, The Last Ship, a deadly virus is wiping out much of the world. The crew of the Naval destroyer U.S. Nathan James is among the only survivors. On board is a British scientist. Her task: identify a vaccine or a cure. When the pilot was picked up as a series, Kane wanted to find a virus guru close to home. “I guess you could say I still had USC in my blood,” he said.

An online search turned up Cannon’s name. “I couldn’t believe what a find she was,” he said.

We’re trying to create an entertaining drama. The best way to do that is to make it as realistic as possible at the core.

Their first phone call cinched it, especially when Kane heard her voice, tinged with her Liverpool upbringing. “I thought, ‘Oh my gosh, you’re the character we’ve been creating for the past year-and-a-half.’ ”

Cannon, who watches TV “all the time” to relax (her favorite pleasure: British murder mysteries), is an old hand at assisting novelists and screenwriters. She believes in allowing literary license. Rather than shoot down an idea, she said, “I definitely want to give the writers permission to go out on a limb and use their imaginations. My job is to find the science to support the story they’re trying to tell.” To her, it’s a little like being a detective.

Kane said the verisimilitude is essential.

“We’re trying to create an entertaining drama. The best way to do that is to make it as realistic as possible at the core.”

Cannon helped the show’s writers “take the best bits” from various viruses to make a new, unnamed virus she calls “such an interesting character.” The task appealed to the teacher in her. She’s convinced that viewers better understand viruses as a result.

“It’s a bonus of being at this university and in this city.” Cannon said. “You get to tell the story about what you do to millions of people around the world.”

One of her proudest moments was inserting an Easter egg — a hidden reference — about USC into a script. When the ship’s scientist is talking about creating a decoy for the virus, she called it “a Trojan Horse.”

Worried about Ebola? USC virologist has other concerns

Here’s a hint: You might want to visit your doctor or pharmacist — and wash your hands often.

Filmmakers Tina Mabry ’05 and Eric Nazarian ’99 graduated from the Production Division at the USC School of Cinematic Arts.

Are viruses alive? After more than 25 years of studying the tiny disease-carrying microbes, Michael Lai thinks so.

Findings could lead to ways to stoke the body’s immune response.

USC alum, virus expert team up for suspense on The Last Ship