Predicting the future of the housing market isn’t easy, but someone has to do it. Dowell Myers, professor of urban planning and demography at the USC Price School of Public Policy, took on this challenge during his bold keynote address at a national housing summit hosted by the Bipartisan Policy Center in Washington, D.C.

“The one thing that is positively known about the future is that everybody alive today hopefully will grow to be 10 years older in 10 years’ time,” said Myers, who directs USC Price’s Population Dynamics Research Group. “So the fact that that’s known and can’t be debated is extremely useful in a political arena.”

The Bipartisan Policy Center is a nonprofit think tank that promotes bipartisanship, public discourse and key policy solutions to the nation’s chief challenges.

Myers’ presentation was part of the center’s New Directions for National Policy: 2014 Housing Summit, which drew more than 1,000 leaders in housing policy and real estate finance from across the country. Attendees hailed from a wide range of organizations, including U.S. Congress, the U.S. Department of Housing and Urban Development, Fannie Mae, the Federal Reserve System and Harvard Business School.

Demographics are bipartisan. They can pave the way to finding consensus solutions to our common problems.

USC Price Professor Raphael Bostic, director of the Bedrosian Center on Governance and the Public Enterprise, also participated in a distinguished panel, discussing the “Outlook on the Economy” that included chief economists from Standard & Poor’s and the Mortgage Bankers Association.

Addressing this audience of thought leaders and changemakers, Myers lifted the hood on what he calls the “demographic engine” that drives the housing market.

“There are buyers and sellers, and in a market view, they’re competing,” he said. “But in the longer view, provided by demography, the buyers and sellers are actually partners in a longer-run process of building a more successful economy. The older people tend to sell; younger people tend to buy. And the more the older people invest in the education of the younger generation, the better home buyers the younger generation will be.”

The Millennial Generation that came of age during the Great Recession doesn’t have the buying power to enter the real estate market for reasons such as stagnant wages and stringent policies reducing access to credit. As a result, homeownership rates have plummeted, with only 20 percent of purchases being made by first-time buyers in contrast to the typical 40 percent. 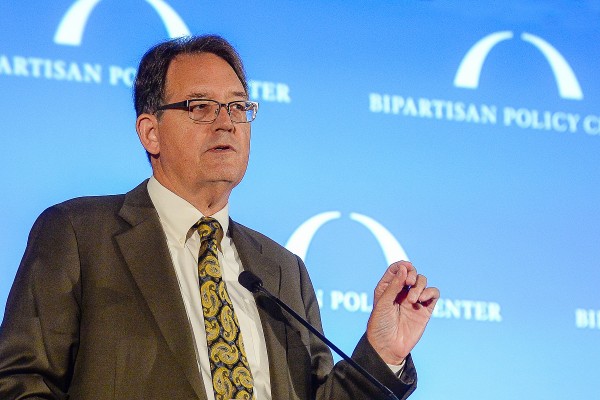 If Millennials can’t afford to buy starter homes now, they won’t be in a good position in the future to trade up into “the half-million dollar houses that the baby boomers think they live in,” Myers explained.

In 10 or 20 years, downsizing baby boomers could be left with no option other than to sell their homes at prices affordable to Millennials who have never owned houses, don’t have savings and can’t make down payments.

An energy force that drives the market

To avoid this sobering scenario, Myers offers straightforward advice: Loosen, not tighten, credit restrictions in order to “uncage the market strength that is lying there in our young people,” he said. “It’s an energy force that has always been what has driven the housing market.”

According to Myers, baby boomers need to understand it’s in their own self-interest to unleash this younger generation of buyers. The Millennial Generation boasts 80 million members, with the potential to wield more economic might than the 70 million members of Generation X who came before them.

“Everybody shares the underlying demographic factors of being born and growing up and growing older, and there are lots of natural connections between the generations,” Myers said. “Once those are discussed, it changes the framework within which we seek solutions to problems. So it’s no longer a battle between opposing political interests, but it’s a shared problem involving people who have a common destiny.

“Demographics are bipartisan,” he added. “They can pave the way to finding consensus solutions to our common problems.”

Rethinking Housing and Aging in Place

Combining home modifications with the Obama administration’s plan to retrofit dwellings throughout the country for energy conservation could help millions of older adults to age in place.