Jane Junn likens her research on public opinion of immigration to a white light entering a prism — specifically the iconic image on the cover of Pink Floyd’s The Dark Side of the Moon.

The white light — representative of the public interviewed as a whole — enters the prism and exits as a rainbow of colors. Each refracted beam symbolizes a different racial identity that must be analyzed separately.

Junn’s book, The Politics of Belonging: Race, Public Opinion and Immigration (University of Chicago Press), argues that our understanding of the public’s opinion on immigration must include an analysis of each racial group’s unique perspective.

“Non-white Americans make up more than a third of the population, so we can’t just keep saying that public opinion is this one thing,” said Jung, professor of political science at the USC Dornsife College of Letters, Arts and Sciences. “The goal of our book was to construct a model to explain why racial groups feel differently about immigration and political belonging.”

Co-authored with Tufts University Professor Natalie Masuoka, the book has received the 2014 Ralph Bunche Award from the American Political Science Association, the leading organization for the study of political science.

“What makes our work relevant is that we are trying to show how Americans get along when we’re now so incredibly diverse,” Junn said. “Diversity has always been a tension in U.S. politics. It’s never been the case that immigrants have been welcomed with open arms — there have always been rules, stereotypes and practices that limit everyone coming together and being treated equally.” 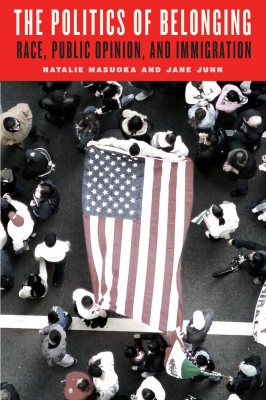 Jane Junn’s book aims to to explain why racial groups feel differently about immigration. (Photo/courtesy of University of Chicago Press)

The Politics of Belonging explores how and why people believe some should and some should not be allowed to live in the United States.

“The politics of immigration is an incredibly divisive topic,” Junn said. “If you’re a Democrat, you don’t want to lose your immigrant voters and at the same time you have to think about your constituents who don’t want to let more people into the country.”

Junn believes that the book is particularly important in today’s political climate because “we have no real, comprehensive immigration policy — even now.

“From unaccompanied minors crossing the border to children being separated from their parents who are found to be unauthorized — everything that happens is a question of what our laws say about who gets to belong.”

The authors declare race as the driving force behind public opinion on immigration.

“Race is the main divider because it has always been the most critical defining restriction to American citizenship,” she said, noting that the Three-Fifths Compromise — a 1787 clause in the constitution defining the slave population to count as three-fifths of free persons — set the legislative apportionment in the states, thus determining the number of seats each state would have in the House of Representatives.

Today, race remains a major discussion in the question of citizenship.

We found that Latinos, African-Americans and Asian-Americans are much more open to a more progressive immigration policy.

The book was also recognized for including innovative data analysis, which drew from five surveys — one of which the authors conducted themselves.

“We don’t take the American public as one group, but rather take the major four racial identities — white, African-American, Asian-American and Hispanic — and look at them separately and in their historical contexts,” she said. “There is a reason why Michelle Obama, for example, feels differently about being American from how Cindy McCain does because the first lady’s ancestors were prohibited from political belonging as a function of race.”

Most national surveys don’t interview enough minorities to analyze each group separately, according to Junn.

“Many public opinion studies describe only what white Americans think about immigration,” she said.

Whites, she noted, have distinctive attitudes about immigration compared to minorities in America.

“We found that Latinos, African-Americans and Asian-Americans are much more open to a more progressive immigration policy given their experiences of conditional welcome to America.”

Junn said that gaining a deeper understanding of where opinions come from — drawing from analyses of both history and personal experience — tells us about who we are as people.

“I think understanding the contours and dynamic of our public opinion offers us insights into how distinct groups decide who belongs in this country,” she said, “and therefore why lawmakers choose to enact — or not even consider initiating — new immigration policies.”

Arizona’s controversial new immigration law has California’s voters divided by age, ethnicity and gender, according to the findings of the latest USC College of Letters, Arts and Sciences/Los Angeles Times Poll.

California voters support tough law enforcement policies on illegal immigration in large numbers, but more than two-thirds of Californians are willing to carve out exceptions for children who arrived in the United States without documentation.

Manuel Pastor speaks on “Immigrant Integration: State and Local Challenges in a Changing Economy” in a briefing co-sponsored by USC’s Sacramento Center.

Three documentaries reveal the challenges faced by Trojans and their families.

Professor points out the public’s diverse opinions on immigration