Marjorie Perloff, one of the foremost critics of 20th- and 21st-century poetry and poetics, will be honored as the 2014 recipient of Washington University’s International Humanities Medal.

The Florence R. Scott Professor of English Emerita at the USC Dornsife College of Letters, Arts and Sciences is slated to receive the medal during a ceremony held at Washington University in St. Louis on Oct. 22.

The author of 16 books and hundreds of articles and book chapters, Perloff will be honored for her outstanding body of work, and for her impact on both the discipline of literary criticism and the landscape of contemporary poetry.

“It’s a great honor to win this great humanities award, particularly since several artists and critics I admire very much have won it in the past,” Perloff said. “I am really honored.”

Given to honor a person whose humanistic endeavors in scholarship, journalism, literature or the arts have made a difference in the world, the medal’s past winners include Turkish novelist Orhan Pamuk in 2006; journalist Michael Pollan in 2008; novelist and nonfiction writer Francine Prose in 2010 and documentary filmmaker Ken Burns in 2012.

Champion of avant-garde and experimental poets

Perloff’s work has focused on the writing of experimental and avant-garde poets. She relates their poetry to the major currents of modernist and, especially, postmodernist activity in the arts, including the visual arts and cultural theory. 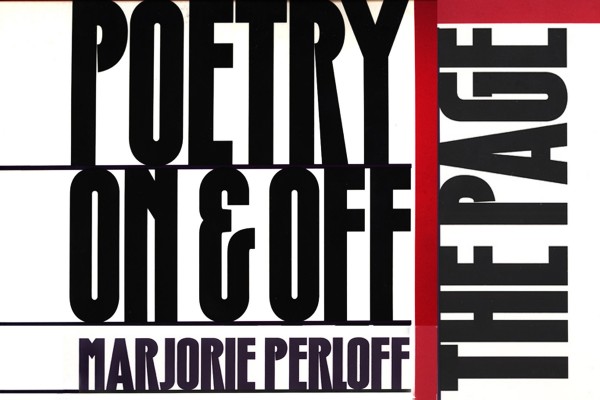 Marjorie Perloff wrote Poetry On & Off the Page in 1998.

One of the first to recognize the importance of John Ashbery and John Cage, Perloff also championed the work of Frank O’Hara, writing the first book about him: Frank O’Hara: Poet Among Painters (George Braziller, 1977). At a time when O’Hara was virtually unknown, she named him one of the central poets of the postwar period. Perloff drew extensively from the poet’s unpublished manuscripts, poems, journals, essays and letters, as well as his published works.

“From the inception of my career,” Perloff said, “I have tried to think through the history of Modernism, as it was taught when I was a student, and introduce some important revisions. Gertrude Stein, for example, had been curiously neglected when I wrote about her in the late ’70s. For that matter, she is still misunderstood; readers complain that she is hopelessly obscure and that is not really the case.”

Among Perloff’s most influential works are Wittgenstein’s Ladder: The Strangeness of the Ordinary (University of Chicago Press, 1996) in which she examined poetry and philosophy, and The Poetics of Indeterminacy: Rimbaud to Cage (Princeton University Press, 1981). Her memoir, The Vienna Paradox (New Directions, 2004), in which she recounts her escape with her family from Nazi terror in pre-World War II Vienna and their arrival in the United States, has just been translated into German and Portuguese, as has her Unoriginal Genius: Poetry by Other Means in the 21st Century.

We must work hard to convince a skeptical public that literature and the other arts matter.

Perloff is a passionate defender of studying the humanities.

“The humanities, as everyone knows, are in trouble,” she said. “We must work hard to convince a skeptical public that literature and the other arts matter; they are always going to matter.

“One of the difficulties facing the humanities is the tendency to justify everything now by saying it must be ‘useful,’   ” she said.

A great arena of human endeavor

The very question about “justification” strikes her as misplaced.

“I don’t think studying literature needs any justification,” she said. “It’s simply one of the great arenas of human endeavor and has been from ancient times to the present. The study of literature literally transforms your life, opening up to you other worlds outside your own narrow one. It enhances your sense of the richness of life and its fascinating complexity: Indeed, it is life, in another form. To have no familiarity with the great literary texts is to lead a diminished life.”

A fellow of the American Academy of Arts and Sciences and the American Philosophical Society, Perloff is a past president of the Modern Language Association (2006) and the American Comparative Literature Association (1993-95). She received an honorary degree of Doctor of Letters from Bard College in Annandale-on-Hudson, New York, in 2008. She has also been awarded a Guggenheim Fellowship (1981-82) and a Senior National Endowment for the Humanities Fellowship (1985-86).

A defense of poetry

An inspirational look at poetry

Like it or not, most people take work home with them. Mary Helen Immordino-Yang, a neuroscientist and educational psychologist at USC, takes inspiration from home to work.

Gioia honored for his poetic prowess

Dana Gioia joins a list of the greatest contemporary American poets who have already been bestowed this national prize honoring lifetime achievement.

The prolific writer will be honored for her impact on the landscape of contemporary poetry.

Perloff to receive Humanities Medal for body of work