Half the world’s population may be female, but in popular movies from around the globe, girls and women are still outnumbered.

A new study from the Media, Diversity, & Social Change Initiative at the USC Annenberg School for Communication and Journalism reveals that less than a third of all speaking characters are female across 120 films in 11 worldwide territories. The study, commissioned by the Geena Davis Institute on Gender in Media and supported by UN Women and The Rockefeller Foundation, was released today at the institute’s global symposium.

“We examined films from some of the most profitable international territories,” said USC Annenberg Professor Stacy Smith, author of the study and founding director of the initiative. “The results illuminate that globally, we have more than a film problem when it comes to valuing girls and women. We have a human problem.”

Extending previous work to new media markets yielded insights into the prevalence and portrayal of female characters in other parts of the world.

The study measured how many characters were shown working, demonstrating that just 22.5 percent of the fictional global workforce is comprised of women. Employed females are largely missing from influential occupations. Under 15 percent of business executives, political figures, or science, technology, engineering and/or math (STEM) employees are women. 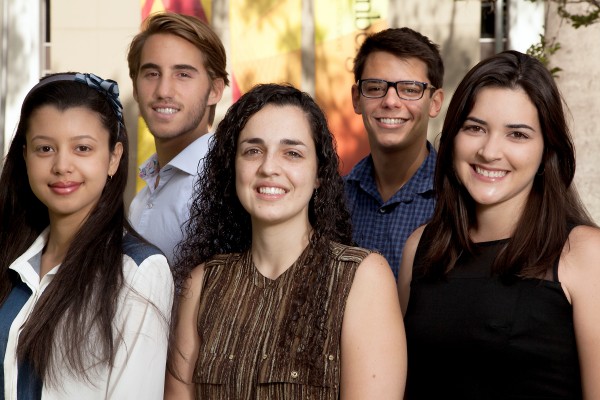 Georgia Soares, Felipe Da Paz, Ana Souza Barreiro, Gabriel Rocha and Lais Wanick, from left, were among the students who conducted research for the survey. (Photo/courtesy of USC Annenberg)

“How do we encourage a lot more girls to pursue science, technology and engineering careers? By casting droves of women in STEM, politics, law and other professions today in movies,” said Davis, founder and chair of the Geena Davis Institute.

Internationally, male characters outnumber females as attorneys and judges (13 to 1), professors (16 to 1) and doctors (5 to 1).

Across the sample, female characters were twice as likely to be portrayed in a sexualized light compared to their male counterparts.

“There is still a gap in equality between males and females across every country we studied,” said Marc Choueiti, one of the study’s co-authors. “Filmmakers around the world have the power to change this — stories and characters are only limited by imagination.”

Less than a quarter of all the films in the sample depicted a female in the lead or co-lead role, and just 10 percent of the films had a gender-balanced cast.

“Filmmakers make more than movies, they make choices,” said Katherine Pieper, another author on the study. “The findings from this study reveal that globally, these choices can mean that girls and women are left out of the picture.”

There were a few standout countries in the study, though no territory depicted females in fully half of all speaking roles. Films from the U.K. (37.9 percent), Brazil (37.1 percent) and South Korea (35.9 percent) were the frontrunners for females, while Indian films (24.9 percent) and U.K.-U.S. collaborations (23.6 percent) lagged.

More than 100 students from several USC schools and majors assisted with the study, which relied on USC’s large international student population to recruit research assistants familiar with the countries that were studied.

“I am extremely proud of all the USC students who worked with us on this project,” Smith said. “These are some of the best and brightest thinkers in the world, and they are going to solve the enigma of gender inequality in film.”

Few women go behind the scenes

Yoobin Cha, a senior communication and psychology major who served as a research assistant on the study, said: “We gained an understanding of the entertainment industry. We talk so much about giving opportunities, but surprisingly, gender is not there yet in film. Not in the U.S., Korea or other countries.”

The study found that just 20.5 percent of the individuals working behind the scenes as directors, writers and producers were women across the full sample, a ratio of nearly four males to every female. Among the countries studied, Brazil was the most balanced (1.7 males to every female) and France the least (9.6 males to 1 female). Films with a female director or writer had significantly more girls and women on screen.

“It was revealing to see some of the differences and similarities between Russian media and media in the U.S.,” said Artur Tofan, a senior communication major and research assistant. “I hope the study will bring change, and I hope we’ll see more diversity in terms of ethnicity, age and gender representation.”

For females in film, progress is Frozen

The research documents the gender distribution of filmmakers participating in two Sundance programs between 2002 and 2013.

In the last five years, Hollywood has generated well-known and popular female-driven fare such as Bridesmaids, The Hunger Games and the Twilight franchise. Given the success of these blockbusters, you might think that the number of roles for women is on the rise. Think again.

Gender stereotypes persist in films on a worldwide scale