A new study from USC is raising awareness for the first time on how college sports impact the lifetime health and well-being of student-athletes.

Published online in the Journal of Athletic Training, the study highlights predictable challenges for former athletes, including health problems with joints later in life, but it also offers encouraging signs, such as better psychological health among current student-athletes compared to their non-athlete peers.

Surprisingly, the cardiovascular health of former athletes was similar to non-athletes. And despite their joint health concerns, former athletes had similar health-related quality-of-life (HRQL), suggesting that these issues might be effectively managed by quality health care.

“The most important thing to understand is the novelty of this study,” said Shawn Sorenson MS ’08 PhD ’12, lead author and adjunct assistant professor in the USC Division of Biokinesiology and Physical Therapy. “As much as people are talking about health issues among former athletes, and as important as those discussions have become, until now no one had comprehensively studied lifetime health in modern competitive athletes compared to their peers.” 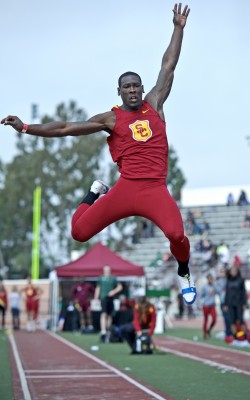 Sorenson pointed out that prior to the USC investigation, the best available data came from a handful of studies on male athletes of the 1920s to 1960s, a group fundamentally different from modern athletes.

“This is basically a one- or two-generation update on what we know about athletes’ lifetime health. For the first time we’re studying athletes who reflect the modern landscape of sports, including the participation of women.”

Researchers surveyed 496 USC students and alumni between the ages of 17 and 84, including current and former NCAA Division I athletes and a non-athlete control group.

Participants described their lifetime experience with a variety of health conditions, including: joint (e.g., knee or shoulder pain), cardiopulmonary (heart disease, high blood pressure or diabetes), and psychosocial health concerns (personal relationships, depression or body image). They also reported both their physical and mental HRQL — the degree to which physical or mental health concerns affected their regular daily activities.

Former athletes over 43 years of age were far more likely to report joint health concerns. Ninety-six percent reported seeking medical treatment for those concerns, 14 times the relative risk compared to non-athletes of similar age. Although older alumni were more likely to have cardiopulmonary health concerns than younger alumni and current students, there were no differences between athletes and non-athletes. Current athletes had better psychosocial health and mental HRQL than non-athletes, and across all age groups, physical HRQL was similar for athletes and non-athletes alike.

“It’s counterintuitive,” Sorenson said, “but we believe that some combination of effective treatment, better initial physical capability and maybe a higher pain tolerance in the athletes could explain how — despite more joint health concerns later in life — athletes have similar quality-of-life to that of their peers.”

The idea that former athletes could have more joint pain, yet still maintain a high level of function is consistent with previous studies. Sorenson said that quality health care is key.

“It’s not necessarily a bad thing to seek treatment, especially if it’s preventive,” he explained. “With effective treatment we can help mitigate the impact of injuries that athletes experience or better yet keep those injuries from happening in the first place.”

The study is distinct for its “whole person” approach, considering not only physical problems like arthritis, heart disease and head injury, but also psychological and social challenges such as depression, personal relationships and body image. Sorenson said this was made possible by exceptional collaboration from an interdisciplinary study team.

To enjoy lifelong health benefits, athletes need to maintain healthy exercise patterns, just like everyone else.

Current athletes in the study were less likely to report psychosocial health concerns than non-athletes, although this advantage didn’t persist among alumni. The explanation could be generational, with younger athletes benefiting from psychological health resources that weren’t available to their predecessors. Alternatively, former athletes faced with the challenges of transition to “life after sport” might be struggling with health challenges not faced by their peers.

In a related article published earlier this year, the USC study team found a link between life span exercise and cardiopulmonary health. The fact that former athletes failed to show an advantage in heart health compared to non-athletes is likely explained by their similar exercise behaviors.

In a climate of intense public dialogue about the health and well-being of college athletes and the future of college sports, Sorenson believes the study offers a critical reference point.

“If we’re going to take action to improve athletes’ long-term health, the first thing we need is a clear, evidence-based picture of what exactly their health looks like,” Sorenson said. “Once we do that, we’re in a much better position to direct resources and offer proactive interventions to most effectively improve athletes’ well-being. I’m extremely proud of what we achieved with the TLC program here at USC and hope it will serve as a model for others throughout college, youth and professional sports.”

Researchers addressed the leading cause of death in the United States at the Los Angeles Area Cardiovascular Research Symposium and Research Award reception.

Can student-athletes maintain their fitness for life?