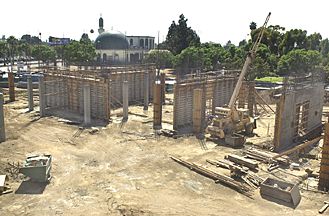 The 134,000-square-foot Internationally Themed Residential College takes shape at the corner of Exposition Blvd. and Vermont Avenue. Construction on the campus’ first new residence hall since 1982 began after commencement and will wrap up by fall 2001. The first phase of the project is a four-story building to house 400 students, a faculty master and faculty fellows, visiting dignitaries and the college’s ambitious academic and cultural programs.

Students, faculty and staff who strolled the University Park campus this summer had to dodge major construction projects that blocked central walkways. Scaffolding covered Doheny Library and the Student Union. And a major new building, the Internationally Themed Residential College, began to rise in the southern corner of campus.

This year’s summer construction season – with 90 projects worth more than $85 million underway – was about the same in scope as in recent years, but the projects were much more visible, said Jon Soffa, executive director of planning, design and construction project management.

“Dollar-wise, this summer was an increase over last year,” he said. “Some of these projects have had a big impact.”

The most disruptive project – the new central chilled water plant at the Physical Education Building – was probably the least understood.

The first project of USC’s new $10 million master energy program tore up parts of Childs Way, Watt Way and West 37th Place for most of the summer, diverting pedestrians through new routes to and from the central campus. The purpose? To install two new large-capacity chillers at the PE Building and connect them, via underground pipes, to 18 nearby buildings.

“Chilled water is used in the air conditioning system of a building to create a cool and pleasant environment,” Soffa said. “It’s not for drinking water.”

In the past, each campus building has had its own chilled-water equipment. “Today that does not provide very good economy or flexibility,” he said, and the old equipment is now inefficient and prone to breakdowns. “This is a self-funded program where the investment now will pay itself back in energy savings over the life of this program.”

Here were some of the major projects underway this summer – from the $35.4 million Inter nationally Themed Residential College to the athletic department’s tiny new golf practice facility.

• ITRC. Construction on the 134,000-square-foot building – the campus’s first new residence hall since 1982 – began after commencement and will wrap up by fall 2001. The new college will let U.S. and international students live together, eat together, practice another language and hear visiting experts discuss global issues. The first phase of the project will be a four-story building to house 400 students, a faculty master and faculty fellows, visiting dignitaries and the college’s ambitious academic and cultural programs.

• Doheny Memorial Library Renovation ($21.2 million). Construction of seismic and fire life-safety improvements to the 70-year-old campus landmark began in January and will continue through spring 2001.

This project has been among the most challenging, Soffa said. Construction planning and the massive relocation of staff and books alone took one year.

“Doing something in a building of that age and beauty has some interesting twists. To access the foundations, you had to get below the existing basement, and much of it had to be done by hand – you couldn’t use large equipment. It meant using a shovel and hauling out debris one wheelbarrow at a time,” he said.

• Student Union Seismic Renovation ($3.7 million). This summer’s work to strengthen the third and fourth floors against future earthquakes marked the final phase of this three-year project.

• Annenberg School for Communication. The second phase of a three-phase remodeling project improved several areas of the building, including the office of the Chicano News Service ($44,000), recruitment area ($100,000), first-floor offices ($80,000) and third-floor offices ($76,000). It also created an electronic learning center ($450,000).

• Cromwell Field Renovation ($4.49 million). Helped by a $2 million gift from trustee Katherine B. Loker, the project will build public restrooms, new bleachers seating 1,000, and a facility for locker rooms, staff offices and team meeting space for track and field programs. Construction is expected to finish this winter.

• Zemeckis Center for Digital Arts ($5 million total). A state-of-the-art screening room was installed as the final phase of the renovation and expansion of the former Performing Arts Annex in the North University Park area.

• Seaver Residence Hall Cafeteria Renovation ($1.76 million). Extensive renovations will improve the interior and the outdoor patio of the Health Science Campus’ major cafeteria. Work will continue into the fall 2000 semester.

• Golf Practice Facility ($200,000). The small pitch-and-putt practice facility behind Dedeaux Field will be used by the USC golf team.

The next major new construction project will be HSC’s $40 million Neurogenetics Institute, planned to start this fall, Soffa said. Other major new buildings – the Campus Center, University Events Center and Science and Technology Complex – are still in the planning phase.

This summer’s construction continues USC’s steady growth, but with a difference, he said: “Some of these projects are true milestones.

“We’re finally completing the Student Union seismic renovation. The construction of a central chilled water plant, which has never been done at USC before, represents a major policy decision in terms of better energy management,” Soffa said. “And with the Internationally Themed Residential College, we’re launching one of USC’s priority projects, to increase on-campus housing and offer innovative programs to student residents.”