USC athletes are more than just champions on the field, court, diamond and in the pool; they’re champions in the classroom as well. Throughout the year, USC Athletics will speak with scholarly Trojans in a series of student-athlete spotlights. First up: a conversation with Hayley Crone, a senior who majors in communications and plays women’s volleyball.

What made you want to come to USC?

I have a lot of family that went here. I’m holding the legacy within the family. USC is close to home, but there’s distance at the same time. Being able to have my parents come to every game is nice.

Did any of the older players on the team prepare you for what it would be like to balance athletics and academics?

The seniors are really good about taking the freshmen in, that’s something we focus on. It’s so crazy to think I was a freshman three years ago; it goes by so fast. But the seniors were so helpful when I was a freshman, telling me what classes to take. We always do this activity were we show the girls where their classes are at the start of the semester. The seniors are really helpful. Mick [Haley] always wants us to act like this is one team — we aren’t the seniors and the freshmen. We are one team and that mindset helps the freshmen a lot.

What was the hardest thing to adjust to when you came here?

I remember my freshman year we went to Penn State the first week of school. I had no idea what was going on at school, I was so focused on volleyball and I missed class. I was really lost. Traveling your freshman year is really hard because you miss so much. Just learning how to balance class, travel and volleyball was really hard. My freshman year we also went to the Final Four. We went from Hawaii to Texas and all of that was during finals. I took all my first finals on the road and that was really hard. You just have to learn to adjust to that. You learn to communicate better with your professors and TAs and it gets better.

What did you learn from Natalie Hagglund, one of your best friends, when she was here both as an athlete and a student?

Nat is a girl who excels in every aspect of life. She is so competitive. Whether it’s in the classroom, on the court, she just wants to do her best. Anything less than that she just won’t accept. And I think I’ve really learned from that, to just play as hard as I can always. I remember when I was a freshman and sophomore, I had the mentality where I told myself I just needed to get through. I didn’t want to take a minor. But Natalie was always telling me to do it. She really challenged me to be the best that I can be.

You went to China two summers ago for the Pac-12 All-Stars trip. What was that experience like?

It was a culture shock. I am so glad I was able to go. It was really hard to adjust to the food. I’m so glad my mom packed snacks. The Chinese food is not like Panda Express. There’s no such thing as orange chicken. But it was a great experience. I got to see things I would probably never be able to see otherwise. It was really awesome to meet all the other girls in the Pac-12. Playing against them my junior year was really special since we shared that experience. It makes the conference closer.

Do you know what you want to do with your communications major? Or what you would like to do when you are done playing volleyball?

That’s the million dollar question, isn’t it? I have no idea. I could go play professionally overseas, but I don’t know if that’s really something I want to pursue. Otherwise, I’m not sure. I am definitely interested in sports. I am interested in event planning, too. So maybe something in sports management, which kind of incorporates both. Hopefully the Trojan Family and all the networking here will help me figure it out.

Being a Trojan is such an amazing thing to say and an amazing thing to live as well. When I was in China, we were at this silk market and I saw this guy with a USC shirt on. He sees me and says ‘Fight On’ and I just thought, ‘Wow. That’s powerful.’ We are in China, no one else is speaking English and yet we’re having a full conversation about USC. Being a Trojan is real and it’s everywhere. That’s so powerful within itself. 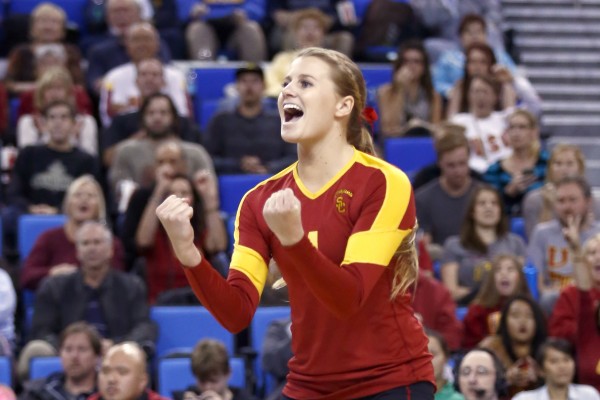 Crone thinks the team has the potential to be a national champion. (Photo/courtesy of USC Athletics)

So you have a full year left. Do you have an increased sense of purpose or a different mentality heading into your final year?

It really puts things in perspective for me. One day practice won’t be so great, but I just remind myself that I only have a certain amount of practices yet. So I just try to embrace it. Even traveling. Our team is really close, so I’m traveling with all of my friends. What other time am I going to be able to do that? I’m just trying to live day by day and really loving every second. I’m always on campus, I’m always seeing everyone. I know that I’m going to miss this so much so I’m trying to take everything in.

What are your goals for yourself and your team this season?

This year I really just want to lead this team. We have so much potential, we are really young and I think leadership is super important in that. Obviously our goal is to win the Pac-12 and go ahead and win the national championship. I haven’t been able to do that yet. I’ve been to the Final Four and been to the regional finals so I think it’s time for us to win the national championship. I think this team definitely has the potential to do so.

Pharmacy students learn about folk medicine in the Balkans

The undergraduates gain new perspectives by examining the history and culture of the region through the lens of folk medicine.