Gail Victor Anderson, founding faculty member of the Department of Emergency Medicine at USC, died of complications from pneumonia on Sept. 6 in Pasadena. He was 88.

“The world of medicine has suffered a great loss,” said Carmen A. Puliafito, dean of the Keck School of Medicine of USC. “The USC Department of Emergency Medicine residency program is one of the country’s most highly regarded, and that was very much due to Gail’s stewardship.”

A memorial service is planned for Sept. 19 from 11 a.m. to 1 p.m. at Aresty Auditorium on the Health Sciences Campus.

Gail was not only an astute politician and leader, but he was also highly concerned with the welfare of the individual patients.

Best known as the “father of emergency medicine,” Anderson became the first professor and chairman of an academic department of emergency medicine in the United States when the dean of USC’s medical school and the medical director of the county hospital asked him to take the position in 1971. Upon his retirement as chairman of the department in 2002, his faculty at the Los Angeles County+USC Medical Center had trained more emergency physicians than any other residency program in the country.

“Not many people can say that they launched a new medical specialty, but Gail was one of the few individuals who launched a highly successful specialty in emergency medicine,” said Ed Newton, interim chair of the department. “In fact, people now can hardly imagine a hospital without emergency medicine. Gail was not only an astute politician and leader, but he was also highly concerned with the welfare of the individual patients. He set that tone for the entire department for many years to come.”

Born on Oct. 3, 1925 in Florida, Anderson served in the United States Navy during World War II before attending college and graduating from medical school at Loma Linda University. Following residency training in obstetrics and gynecology in Washington, D.C., he became the director of the ob-gyn service at Los Angeles County General Hospital in 1958. Recognized as an extremely accomplished gynecological surgeon and teacher of gynecological surgery, Anderson became a noted researcher of diabetic pregnancy and rose to become professor and acting chair of the obstetrics and gynecology department at USC. 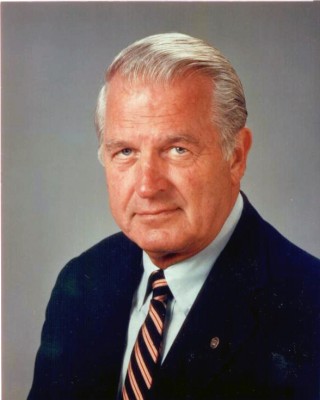 After the USC emergency medicine training program began in 1971, Anderson and others continued to push for formal recognition of the specialty during the next two decades. He traveled internationally to meet with physicians also interested in the advancement of emergency medicine. In the early 1970s, he founded the first physician assistant emergency medicine program at LAC+USC. In 1976, he and 11 other representatives formed the American Board of Emergency Medicine and served as its president from 1987 to 1988. Emergency medicine was designated as an independent freestanding specialty the following year.

In 1996, the American College of Emergency Physicians presented the James D. Mills Award for Outstanding Contribution to Emergency Medicine to Anderson. On the occasion of his retirement, the Board of Supervisors of the County of Los Angeles renamed the emergency department The Gail Anderson, M.D. Department of Emergency Medicine.

He was active in civic organizations and served the South Pasadena community as school board president, high school team physician and instructor in school health classes. An accomplished athlete, he was a champion Navy boxer, a standout college baseball player, an avid golfer, a skillful tennis player, an enthusiastic skier and an adventurous sailor.

Anderson’s motto during his professional career was “the patient comes first.” He was known affectionately to his sons as “Doc” and later to his grandchildren as “Grampa Doc.”

Anderson is survived by his wife, Alice; his five sons Gail Jr., David, Jerrold, Walter and Mark, and their wives and children; his brother, Donald; and many nieces and nephews.