As a filmmaker crossing between the oft-partitioned worlds of documentary and fiction filmmaking, Tracy Droz Tragos ’93 is attracted to personal and intimate stories with the potential to reveal universal truths.

It’s this search that led to the production of Be Good, Smile Pretty, her first documentary, which explores the legacy of loss caused by the deaths of American soldiers in Vietnam. The film, framed through the death of her own father when Tragos was just 3 months old, aired on PBS’ Independent Lens and went on to win numerous awards, including the 2004 Emmy for best documentary.

There is also an autobiographical glint in Tragos’ most recent film, the documentary Rich Hill, which explores American rural poverty through the lives of three vulnerable adolescents and their families in the titular Missouri city where Tragos’ father was both born and buried. Rich Hill, already a Grand Jury Winner at the 2014 Sundance Film Festival, is available on multiple VOD formats and will air on Independent Lens in 2015.

Was there a particular film/television show/piece of media that made you want to pursue film?

Many films of the ’70s about the Vietnam War made me want to pursue film — The Deer Hunter, Apocalypse Now. They brought me closer to my father, who had died in Vietnam when I was an infant. If there was a medium that could bring me closer to someone I so much longed to know, I wanted to be involved in that somehow.

What do you remember most fondly about your time at the USC School of Cinematic Arts?

I think Nina Foch’s acting class and Frank Daniel’s voice, walking us through a screening of Toto Le Hero … it was also the place where I made my first documentary, about friends of my family who lost everything in a house fire. Something about the experience of making this short film — without a script, despite the fact that I was a screenwriting major — the authenticity and intensity of it — really appealed to me.

How has being an SCA alum impacted your career? 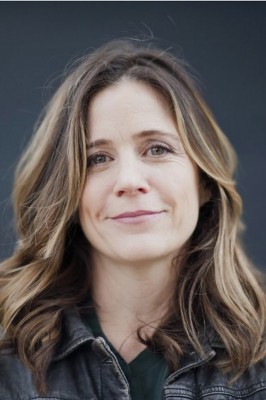 Since my MFA was in screenwriting, which is often such a lonely endeavor, I don’t think I have taken advantage of the alum network as I should. I give that advice to others a lot now — take advantage of the network, get to know your peers, build a team now. If any of my friends from film school are reading this, please get in touch with me. I want a reunion!

If you weren’t in the film/entertainment industry, what might you be doing?

Boy, I have no idea. Maybe I’d be writing fiction — that was what I majored in at Northwestern University as an undergrad. Or involved in theater, my minor at Northwestern University. My mother is a lawyer, and for a fleeting moment, I considered that. But it’s not the way my brain works. I need to tell stories. I need emotional experiences and moments of connection with collaborators/actors/subjects/audiences.

I really love the act of creating a film — narrative or documentary — and seeing it full circle — not a thing that lives on a shelf that you never experience with the world but a story that has a life of its own and can change people and — gulp — maybe even make the world a better place. All paths have led to where I am today, and I can’t imagine doing anything else. Except maybe taking a little more time to be with my family and go to the dentist.

Tell us a little bit about growing up in Rich Hill and how your biography influences your creative process.

Rich Hill was my father’s hometown. I spent about a third of my time there. I recently returned from Michael Moore’s festival in Traverse City, and he made a joke that I “summered” there. But it’s true. When school was out, that’s where I went to be with my father’s parents. I think many artists, no matter what their medium, feel a bit like an outsider looking in at something and that’s often how I felt. Even though I had a deep connection with the place, through my father and grandparents, in reality, I was a kid from Oakland, California. So I kind of never felt like I fit in anywhere — a city kid with country roots or a city kid in the country.  Sometimes it felt like I was a poser in both places, never really at home anywhere. But that experience gave me a perspective of both places I wouldn’t have had otherwise. Every filmmaker’s biography informs their work, whether they realize it or not. Especially with independent film, when you experience so many lean and challenging times and have to put so much of yourself into getting anything made, a deeply personal connection is often what sustains. For me, my films and the stories and scripts that I write are all about family and family connections or longing for connections.

Tell us a bit about which films, if any, influenced your approach and what “documentary” means to you in the age of reality TV.

It may be strange to stay this — when journalism is really the cornerstone of much documentary work — but I’d say subjectivity is what makes documentary filmmaking different from reality TV — a filmmaker’s perspective, even when it seems to be purely observational. And when there is more of a filmmaker’s hand, it’s even more of a documentary and farther away from reality TV, which can be formulaic and sensational. I also believe that “documentary” is not a genre in and of itself — that there are many genres within documentary — and some actually do resemble reality TV.

The biggest difference with Rich Hill was our patience and a longer-form approach. It wasn’t my intention as a filmmaker to “get in and get out” but to linger and to come in and out of conversations that would continue over time. I really wanted to take a cinematic approach to our film, which meant thinking about shots, scenes, score and sound design in a very intentional way. We took great care.

The films that influenced our approach were many — Ballast, Hoop Dreams, Bombay Beach, Only the Young. Even films that don’t seem like they’d influence me did, like Harlan County, USA and Grey Gardens. Those last two documentaries inspired me not to be a purist — that it was OK to come in and out of observation — that we didn’t have to be strictly a “verite” film, etc. That we could take a freedom to do what felt right for the film and the relationship we had as filmmakers to the families.

What do you feel is the future for filmmakers such as yourself and/or less commercial films/documentaries such as Rich Hill?

The future is pretty great. I mean there are so many different models and opportunities out there, starting with and including how you fund films (crowdfunding is an excellent way of connecting with an audience, beyond the financial rewards). There are audiences out there for many different kinds of stories, and it’s really a matter of finding them. You can work with a distributor, as we have, or you can do the self-distribution route. I think it’s pretty exciting.

If you could go back and speak to your 20-something-year-old self, what advice would you give?

I wouldn’t have waited so long to “greenlight” myself. After film school, I took a lot of jobs — first at an agency, then at a studio — and all the while I was writing “on the side” and hoping some day to figure out how I was going to get my scripts made or get hired on a show. It was in the midst of one of these “on the side” writing periods while surfing the Internet that I made a personal discovery, and that is what propelled me into making my own film and greenlighting myself. I wish I’d figured that out a bit sooner — not to wait for others to give me permission to do my work or to validate my talent. I could give myself permission and the rest would follow.

What professional accomplishment are you most proud of?

I suppose my first film, Be Good, Smile Pretty. There’s so much about the production quality that I cringe at now, but when I look back at how driven I was and what it took to see it through, I’m amazed I pulled it off. Even now, when it feels dated, there’s a truth in the experience that audiences still connect with and I’m proud of that. It was pretty great when it won the Emmy, too.

What’s next for you?

I’m excited and overwhelmed for all I have in the works at the moment. I’m developing several documentary projects — I’ve never juggled so many projects at once — and am actually looking to hire an associate producer and assistant — so please send me an email at richhillfilm@gmail.com. I’m also writing a script that I plan to direct in 2016.

Tamara Shogaolu, a USC School of Cinematic Arts graduate student, has been chosen as one of 18 students from across the country to receive a Luce Scholarship.

It didn’t take a business degree for USC senior Matthew Taylor Ruggieri to realize that there was a big opportunity in the men’s grooming market.