Government officials, business leaders and environmental researchers gathered in Sacramento to discuss the state policies and information gleaned from nearly a decade at the forefront of addressing the issue of climate change at a symposium co-sponsored by the USC Schwarzenegger Institute for State and Global Policy.

Organized to take place as the United Nations prepares for its 20th annual climate change conference in Peru this December, the Sept. 8 symposium “Global Climate Negotiations: Lessons From California” featured two of the key figures in turning California into a global leader on the topic — former Gov. Arnold Schwarzenegger and current Gov. Jerry Brown.

If we continue to pioneer and to prove that we can succeed environmentally as well as economically, other people will be able to follow.

Schwarzenegger, who in 2006 worked to pass the landmark Global Warming Solutions Act to progressively reduce greenhouse gas emissions, asserted that it was an important message to the rest of the country that California has never put the environment into an ideological corner.

“While the politicians in Washington can’t get anything done because of being stuck in those ideological foxholes, we here in California have two governors from two different parties in the same room fighting for the same green energy future,” said Schwarzenegger, chair of the institute and Governor Downey Professor of State and Global Policy at USC. “Isn’t that fantastic?”

Schwarzenegger attested to California’s reputation as a leader in energy and climate change, noting that the state is 40 percent more energy efficient than the rest of the country. If the whole of the United States adopted California’s green policies, he said it would allow for the closure of two-thirds of the nation’s coal-fired power plants or the equivalent of taking 188 million cars off the road. The Obama administration already adopted California’s tailpipe emission law as a federal standard in 2009.

“If we continue to pioneer and to prove that we can succeed environmentally as well as economically, other people will be able to follow,” said Brown, who went on to twist a famous Las Vegas slogan to fit California. “What happens here doesn’t stay here. It goes all around the county and all around the world.” The event included three panel discussions covering the economic costs of climate change effects, why addressing climate change is good for business and taking the California model global.

USC Price School of Public Policy Dean Jack H. Knott introduced the panel on economic costs, which was moderated by Dan Mazmanian, a USC Price professor and new academic director at the Schwarzenegger Institute, which is housed within the school.

“Arnold chose the USC Price School’s philosophy that public policy is best informed when guided by facts and research,” Knott said. “We both share the view that academic research should focus on how it can actually influence real-world problems. … When decision-makers often hear arguments claiming that climate change is too costly, it’s important to have research that looks at what not addressing climate change would cost.” 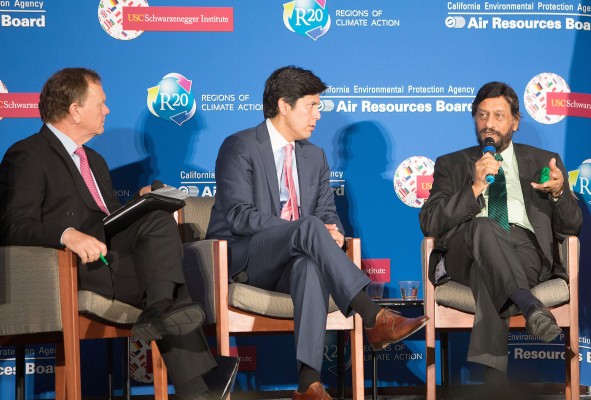 Peter Gleick, president and co-founder of the Pacific Institute, noted that a rise in sea level could put at risk more than $100 billion in property, 480,000 people living in at-risk areas, 29 waste treatment plants, 10k megawatts of power plants and thousands of miles of road and transportation infrastructure.

Associate Professor Anthony Westerling of the University of California, Merced, noted the property loss and rising costs to fight wildfires, which have been continuously increasing in number and duration for more than 30 years. “Although our knowledge is far from perfect in these areas, there are important steps that can and should be taken now in order to avoid potentially very serious economic and other costs of inaction if we fail to do so,” Mazmanian said.

“Those who are trying to stop efforts to address climate change and reduce greenhouse gases in our state, in Congress and elsewhere, say, ‘Well, maybe the science proves there’s climate change occurring, but we cannot afford to do anything.’ They say it hurts the economy and jobs,” Reiss said. “… We do this to directly refute those who say addressing climate change is not good for business and jobs.”

“If California sets this blazing trail, then I think the rest of the world has something to follow,” Pachauri said. “I would like to appeal to the leadership of California, the people of California, the businesses and of course civil society and academia to see that the remarkable record that you have can be accelerated, can be built on, so that all of us and the rest of the world get a sense of confidence and a great deal of inspiration by which we can really tackle this most important challenge that human society is facing.”

The event, held at the California EPA headquarters, was co-sponsored by the Schwarzenegger Institute, the state EPA’s Air Resource Board and the nonprofit environmental organization R20 Regions of Climate Action.

Alumna turns up heat on climate change in Vietnam

A candidate in the professional doctorate program at the USC Price School of Public Policy is taking steps toward finding a solution to climate change in Vietnam.

Everyone has been warned about the number of forcing mechanisms causing a change in global temperatures around the world.

Prominent scientists and local leaders converged on the USC Price School of Public Policy on April 8 for a sobering discussion of the National Climate Assessment draft report.