Sitting at a desk, Molly Fender broke out her distinctive, infectious laugh. Broadcasting via the online gaming platform Twitch, the senior cognitive science major prepared to play a bout in the video card game Hearthstone: Heroes of Warcraft. Twitch, a live-streaming platform, allows gamers to broadcast and chat as they play video games.

Fender thoughtfully selected a card to play against her opponent. The virtual playing cards shuffled up and — success! — she beat her opponent. Jumping up from her seat, Fender threw her arms into the air.

I think the gaming industry can affect education.

“That was the best brawl ever,” she exclaimed.

Over the summer, Fender spent five to six days a week live-streaming her gaming through her online Twitch channel MissMollyLolly, which has more than 9,000 followers. Sporting a headset with a microphone, she plays video games as viewers watch and listen. Viewers can also see the game she’s playing. 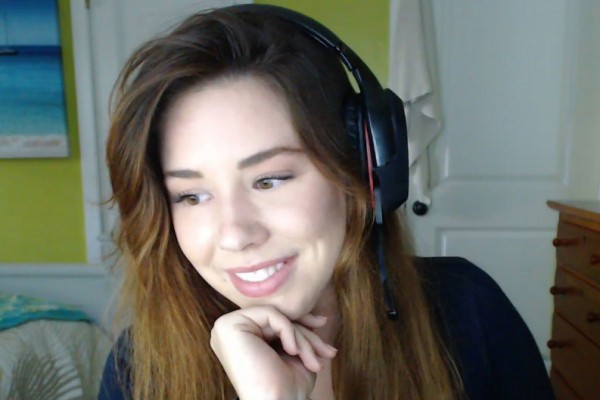 Molly Fender has combined her interests in gaming and children’s brain development to conduct USC research. (Photo/courtesy of Molly Fender)

“I try to keep my conversation very positive and lighthearted,” Fender said. When she live-streams, she will talk about the games she’s playing, strategies for winning and will also answer questions posed via live chat from her viewers.

“I call it our little happy corner of the Internet,” she said.

It’s everything she loves

Gaming is an extension of her interest in cognitive science, said Fender, who worked as a preschool teacher while studying computer science at Santa Monica City College before transferring to the USC Dornsife College of Letters, Arts and Sciences her junior year.

“I love games and working with kids, so cognitive science is a melding of the things I love — computer science and the study of the brain and development,” Fender said.

During her junior year, Fender worked at the Minds in Development Lab run by Henrike Moll, assistant professor of psychology. The lab’s research focuses on cognitive development in infants and young children.

One experiment that Fender assisted with studied whether 5-year-olds performed a task better through auditory or visual cues. The children were given a plastic tube with a peanut at the bottom. One group of children listened as researchers explained how they could remove the peanut from the tube while another group watched a video demonstrating how the task could be completed. The goal was to have the children pour water into the tube to float it to the top so it could be removed.

“What we saw with that age group was that children learn much better when context is provided from the visual demonstration in the video rather than just listening to a set of instructions,” Fender said.

“Participating in experiments like that was very helpful for me because it helped me apply what I was learning in my developmental psychology, and sensation and perception classes.”

Fender also had the opportunity to directly combine her interests in gaming and children’s development through a recent internship at the educational gaming company Gamedesk. There, she worked as a concept writer for the website Educade, which provides teachers with lesson plans and teaching tools that make use of games, augmented reality and role-playing, among other innovative teaching methods.

“I was working on the Educade website and I eventually got involved with the production side of the games, which was very interesting to me,” Fender said. Notably, she got to sit in on meetings about game design, where she learned how the company developed educational games from concept to completion.

“I definitely feel like I have a better insight into what goes into making video games,” Fender said. “It was also wonderful seeing how the company approached education as a whole. They are trying to change how people view the ways we can educate kids and how we can get them engaged in learning. That was really cool to me.”

The experience inspired Fender to pursue a career in educational technology or a related area of the gaming industry after graduation.

“Ideally, I would like to use Twitch and my cognitive science major to dive into the gaming industry,” Fender said.

“I think the gaming industry can affect education. Twitch is a way to gain insight into that industry. For me, it’s about knowing gaming communities and being able to effectively communicate with them.”

An itch to Twitch

Fender said she will continue to stream on Twitch during the school year and probably after she graduates, as a hobby. In fact, her Twitch channel is helping toward her USC tuition.

Through Twitch’s Partner Program, Fender earns money from subscribers to her stream, advertising revenue from commercials broadcast on her Twitch channel and donations from her fans. The income meets the gap that’s not covered by her financial aid and student loans.

“This is my job,” Fender said. “I’m paying my monthly bill for school, and it’s been great. I’m doing what I enjoy and it’s an industry that I’m trying to immerse myself in.

An emotional connection to the games we play

As a kid in Shanghai, Jenova Chen bartered with his parents for the chance to play video games. As he got older, Chen realized what was missing: a mature, emotional connection to the entertainment.

Industry leaders and faculty observe the creative work of students from Cinematic Arts and USC Viterbi.

USC School of Cinematic Arts graduates will release their first game for PlayStation3.

Playing games is more than a job for this science major