For years Langguth shared his extensive knowledge and expertise with the students and faculty of the USC Annenberg School for Communication and Journalism, drawing on a career that stretched from covering the trial of Jack Ruby to a stint as Saigon bureau chief of The New York Times during a pivotal stage of the Vietnam conflict.

We used to spend hours on the phone talking, debating, arguing about everything from politics to personal matters.

After growing up in Minneapolis, Langguth went on to graduate from Harvard College in 1955. One of his first jobs in journalism was as a political correspondent for the Valley Times Today in the San Fernando Valley. There he met his longtime friend, USC Professor Joe Saltzman.

“When we first met in September 1962 at the Valley Times Today, we used to spend hours on the phone talking, debating, arguing about everything from politics to personal matters,” Saltzman recalls in his remembrance of Langguth.

After the Valley Times Today, Langguth went on to work as a Southeast Asia correspondent for The New York Times before becoming the Saigon bureau chief in 1965. In 1968 and 1970, Langguth returned to Vietnam for New York Times Magazine special assignments. In 1976, Saltzman surprised himself by convincing Langguth to join the faculty at USC.

“I asked him if he would be interested in teaching at USC — believing that would be the last thing he would ever do,” Saltzman said. “He said he would, and in my excitement, I promptly spilled my drink all over him.”

Teaching not only gave Langguth an opportunity to shape new generations of reporters, it also gave him a way to pursue his passion for books. Over the course of his four decades at USC Annenberg, he published three novels and 10 nonfiction books and also edited a collection of letters by his colleague in the School of Journalism, Norman Corwin.

Langguth’s newest book, “After Lincoln: How the North Won the Civil War and Lost the Peace,” is scheduled for release on Sept. 16 by Simon & Schuster.

High praise for his prose

Diane McWhorter, author of Carry Me Home, winner of the Pulitzer Prize, said of the book: “A.J. Langguth brings Reconstruction and its attendant issues to vivid life through a cast of all-stars ranging from Charles Sumner to Andrew Johnson to Grant and Greeley — all conspiring toward the tragic rendezvous with Jim Crow. This history lesson is a stirring narrative, a pleasure throughout, leaving the reader nourished and enlightened.” 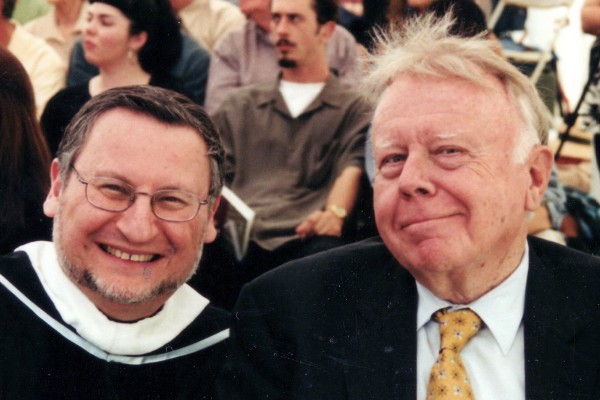 Joe Saltzman and Langguth at a USC commencement. (Photo/courtesy of Joe Saltzman)

After news of his passing broke, former students and colleagues took to social media to share their memories.

Bill Swindell: “A. J. Langguth was a treasure at @USCAnnenberg; blessed to study under him.”

Patt Morrison: “The sublime and prodigious journalist/historian and my pal, the funny, ornery, brilliant Jack Langguth, has died.”

Tim Grierson: “A.J. Langguth was one of my toughest teachers at USC. Got me my first freelance gig. Thank you for everything, sir.”

Elson Trinidad: “The greatest thing Dr. Jack Langguth taught me at @USCAnnenberg was confidence in my own writing.”

Shashank Bengali: “R.I.P. Jack Langguth, a lion of journalism and a professor whose idea of office hours involved martinis at Musso and Frank’s. What a life.”

Steve Padilla: “With great sadness saw obit of writer and journalism prof Jack Langguth. Much of what I do as an editor I owe to him.”

Professor Marc Cooper wrote on Facebook: “I owe my current position at USC to [A.J. Langguth] as he recommended me to be hired as an adjunct back in 2001 and from there I morphed into full-time faculty. Jack was a magnificent reporter and an even better historian. … I can’t say much more except that I loved him very much.”

USC Annenberg School for Communication & Journalism professor Joe Saltzman has been named the national 2010 Journalism and Mass Communication Teacher of the Year by the Scripps Howard Foundation.