Freshman Sidrah Khan, a biological sciences major, peered at her smartphone. She was using it to scan a matrix barcode affixed to the base of the statue of astronaut Neil Armstrong in Archimedes Plaza, located in the southwestern quadrant of the University Park Campus.

Her teammates in this scavenger hunt, freshmen Jennifer Wang, Molly Linder and Tayanna Todd, crowded around her.

The whole idea is to get a chance to explore campus while making new friends.

Khan read aloud the question that popped up on her screen.

After conferring briefly, the freshmen picked the first option. Khan quickly submitted the answer on her smartphone. She and her teammates then consulted the campus maps on their screens once more and set off toward the Ronald Tutor Campus Center to search for their next clue.

Khan and her newfound friends were participating in the first USC GeoScavenge, a Welcome Week event created by the Spatial Sciences Institute (SSI) housed in the USC Dornsife College of Letters, Arts and Sciences.

During the Aug. 22 event, students used smartphones equipped with a matrix barcode — or QR — scanner app to navigate their way across campus as they searched for 23 clues placed at different sites.

Using the GeoScavenge Map (accessible on a smartphone via a QR scan) showing the clue locations, participants had one hour to visit as many sites as possible. At the site of each clue, students had to find the QR code, scan it and submit the correct answer to the related question that popped up on their phone.

Cognizant that the first week is always a challenging experience for incoming freshmen as they learn to orient themselves on the 229-acre campus, SSI came to the rescue. By teaming up with the Office of Orientation, the institute was making that steep learning curve a little easier and a lot more enjoyable.

“The whole idea is to get a chance to explore campus while making new friends, discovering on-campus resources and learning about the history and culture of USC,” said Darren Ruddell, assistant professor of spatial sciences.

Wang participated for a chance to meet new people, get accustomed to campus and feel like a part of the Trojan Family. 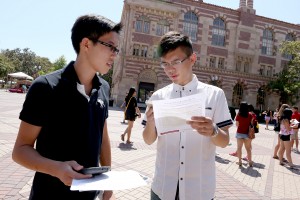 Two participants in the GeoScavenge event confer before setting off to try to find 23 clues hidden around campus. Photo by Matt Meindl.

“I’m going to feel much more confident about finding my way around now,” she said.

Dorm mates Wang, Kahn and Linder had joined up with Todd, whom they met at the event, to form a team. Although none were familiar with spatial science, all were curious to learn more.

“This event also serves to introduce students to some geospatial technologies,” Ruddell said. “We hope students will look at the map and think about routing — what would be the most efficient route to visit the sites of all 23 clues and get back to Tommy Trojan as quickly as possible.”

SSI geodesign majors and spatial studies minor students were on hand to help the freshmen become familiar with the landmarks, layout, history and resources of the campus.

“This is a way for interested students to talk with current students about the courses we offer and with faculty about what it’s like to think about the campus spatially,” said Susan Kamei, associate director of the SSI.

Melissa Turk, associate director of orientation programs, said she was delighted the SSI had joined her office in offering the event to incoming students.

“The GeoScavenge is a perfect fit for us,” she said. “It’s a great program because students get the opportunity to learn the campus on their own. We know from experience that after taking a guided tour, students often say ‘I don’t really remember,’ but when they actively try to find places on their own, they have a better reference of where things are on campus. Plus, all these places are now tagged in their phone, so if they get stuck, they have all that information at their fingertips.”

The event required a bit of collaboration.

“We tried to mix fun USC trivia with a bit of USC history, while also providing information about academic programs and useful campus resources, like where to go to get a flu shot, learn about transportation or find a reasonably priced meal and issues such as sustainability,” said Interdisciplinary GIS Library Fellow Andy Rutkowski, who helped design the GeoScavenge challenge with Ruddell.

Participants met at 2 p.m. at the Tommy Trojan statue, where Ruddell explained the rules.

Once the hour was up, the participants reconvened at Tommy Trojan where Ruddell presented prizes — Universal Serial Bus (USB) drives and water bottles — to the 10 teams.

“The event offered freshmen a really fun way to explore campus while helping to promote spatial literacy,” Ruddell said. “Plus, it was good exercise and a great way to build friendships across disciplines by working collaboratively.”

As for Khan’s team, the members were happy to each receive a USB drive for their completion of the challenge.

Standing at the threshold of their academic careers at USC, the students’ answer to the Armstrong commencement speech question “And what will the future bring?” proved to be not only correct but also an apt reflection at this time in their own lives:

“I do not know, but it will be exciting.”

From convocation to orientation and much more, USC freshmen enjoy their first week on campus.

The class of 2018 jumps into Trojan life with week-long festivities.

These days, there’s an app for just about everything, and USC’s Welcome Week 2012 is no exception.