Growing up in Florida, Tina Weier ’09 thought of being a marine biologist on a tropical island.

“My mom has a picture book I made when I was in first grade that has a photo of me next to a giant fake shark,” she said. “I had captioned it ‘Me and my best friend,  Jaws.’ ”

As Weier got older, her love of the ocean evolved, and she realized she wanted to contribute to society by helping preserve the marine environment for future generations.

Flash forward to the present: It’s safe to say those childhood dreams have come true. After earning a master’s degree in marine biology at the USC Dornsife College of Letters, Arts and Sciences, she now lives in the far-flung Cook Islands, where she swims with sharks and works as a pearl biologist, helping the local community build a stronger, more sustainable black pearl industry.

Weier arrived in paradise for what was intended to be a six-month trip in late 2011 after spotting an online job for a science officer.

“I had never heard of the Cook Islands before so I did a Google Earth search. When I saw it was a tiny speck in the middle of the Pacific, I decided I had to apply or I would never forgive myself. One month later, I was on a direct flight from Los Angeles to Rarotonga.”

Initially, however, things didn’t work out quite as she had planned.

When the lagoon monitoring project’s first expedition was indefinitely postponed, Weier found herself working as a volunteer making no money and living far from home.

“I had sold my motorcycle and given up my job and apartment in Los Angeles,” she said. “I had no choice but to make the most of it.”

In exchange for continuing to volunteer with a local nongovernmental agency, Weier obtained her diver’s certification, then participated in a one-month turtle research expedition on Palmerston Island, a coral atoll.

It didn’t take her long to realize that life in the Cook Islands was a huge opportunity for a marine scientist. 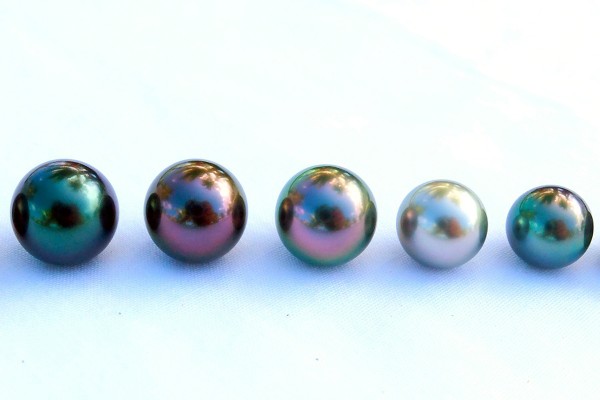 In June 2012, Weier began working for the Cook Islands Ministry of Marine Resources (pearl support division), which provides technical and management support to assist with the sustainable growth of the black pearl industry.

As the staff marine biologist, Weier is stationed on Manihiki, a remote atoll and hub of the Cook Islands pearl industry.

Weier runs the monitoring program for water quality, generating weekly reports to allow pearl farmers to adapt their practices based on environmental conditions.

“Because oysters require pristine environmental conditions to produce pearls, the industry itself demands conservative and environmentally friendly practices,” she explained. “It is a perfect example of people working sustainably and in harmony with the marine environment.”

The tiny atoll of Manihiki, which is divided among more than 50 small islands, totals just 2.09 square miles of land. Its 204 inhabitants live an idyllic, if isolated, life.

“There are no malls, supermarkets, restaurants, cinemas, bars, doctors, dentists or bookstores. Internet is slow and expensive. There is satellite television, but only one channel can be watched at a time. So everyone watches what the telecom manager wants to watch. We don’t bother.”

Instead, Weier and her fiancé go free-diving on the tua, the outer reef, or they go for walks on the motu, the small uninhabited islands ringing the lagoon.

“We spend a lot more time preparing food here because it takes much longer to catch a fish, clean it and fillet it than it does to pick one up from the grocery store. We also have to be very creative to maintain variety.”

One of the greatest challenges Weier initially faced revolved around food. Cargo vessels bringing supplies stop at Manihiki once every three or four months.

“It was hard to adjust to not being able to order take-away or be able to pop down to the grocery store when we ran out of something,” she lamented. “After our first three months, we ran out of everything because the ship with our food on it was delayed by seven weeks. Luckily, there is a constant supply of coconuts and fish, and the people here are incredibly generous and helpful. Nobody on Manihiki ever goes hungry.

“Ninety-nine percent of the time it doesn’t even occur to me that we are missing anything. In America, day-to-day life is filled with advertising. Here there are no billboards and no commercials, no ‘haves and have-nots.’ Everyone is equal, everyone works together, shares and helps each other. There are things we don’t have, but we just don’t notice or care.

In the end, it’s the dream that matters.

“For me, it is the realization of a lifelong dream to live in a remote island paradise and help establish sustainable relationships between people and the sea,” Weier said.

“I can’t imagine anything else I would rather be doing.”

Thanks to a Neighborhood Outreach Grant, students at the Foshay Learning Center are teaming up with the USC Sea Grant program. Together, they explore the world beneath the waves.

USC biologist David Caron will lead an Antarctic research mission to discover what is eating the algae.

Nano-sized phytoplankton convert gaseous nitrogen into a form useful for other living things at a rate much higher than once thought, says a USC researcher. The finding is crucial in the face of global climate change.

The islands are her oyster