All it took was the first couple of notes of the school’s fight song. Then all of the students at the Galen Center were on their feet, clapping and hollering, as the USC Song Girls waved their pompoms and the USC Trojan Marching Band sounded its horns.

No, this wasn’t the first football game. It was the fourth annual Fall Sports Pep Rally, presented by Trojan Pride and USC Athletics. On a Thursday night, students flocked to the arena for giveaways, performances and a look at the school’s athletic tradition.

“I came because I enjoy supporting all of our athletes and there’s free stuff,” junior Krisha Jain said. “And I get to see the marching band, which is always great.”

The band, along with the Trojan Dance Force, the Song Girls and the Spirit Leaders, led the crowd in some of USC’s popular cheers. With arms tangled together, the entire student section swayed side to side in unison. Already, it was beginning to feel like family, particularly for the freshmen in attendance. 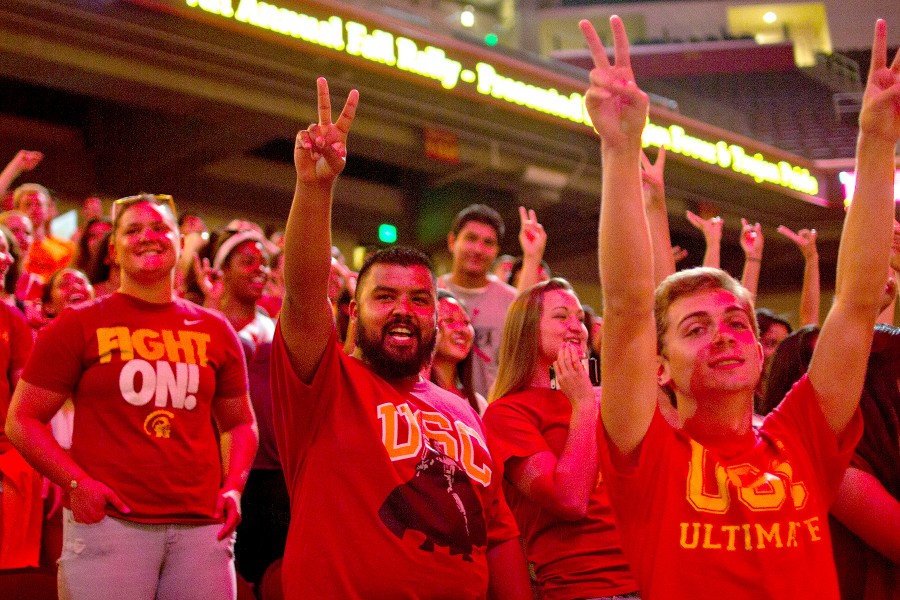 The crowd responds to performances by the Song Girls and Trojan Dance Force.

That spirit of unity continued throughout the night, as the event’s DJ introduced every athletic team and their long list of achievements. Athletes came running out, threw T-shirts into the crowd and showed off some of their best dance moves. At one point, the DJ even brought together the athletes, the student section and the band for a dance-off.

“The highlight of the night was seeing the football athletes, the track athletes, the students and the band do the Naenae [a dance move],” Trojan Pride Director Daniel Depew said. “I think that was a great way to unify everyone and that’s one of our priorities at Trojan Pride.”

Break out your best dance moves

The night was also about celebrating the Trojan sports fans. Freshman James McDaniels is a self-described “huge sports fan,” and when he got picked to show off his dance moves for a chance to win field passes at a USC football game, he went all out.

“I didn’t know what to expect, but the next thing I know I’m getting field passes,” McDaniels said. “As a sports fan, that means a lot. I’m excited to get some special access.”

Every student left with free water bottles, posters and a new sense of pride in their school and the athletic teams, from women’s lacrosse to men’s water polo.

“It’s a celebration for all of our students to come and kick-start the season,” Trojan Pride Assistant Director Sarkis Ekmekian said. “We want to raise awareness for all of our athletic teams and let the students see them and get to know them; that way they’re excited to cheer for them at the games this year.”

The Spirit of Troy kicked off the Bowl season by sharing the stage with headliner Gwen Stefani and the band from that other university across town.

Year in review: From a much-awaited series of commencements for two classes to a special homecoming and more, check out some of this year’s most popular stories.